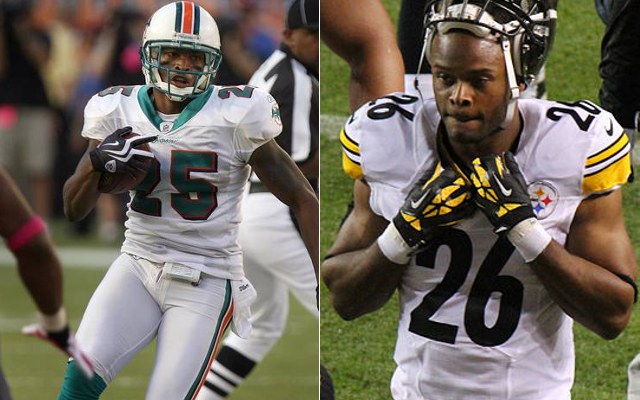 Having the same name as someone who’s prominent for the wrong reasons can be problematic, and former Tampa Bay Buccaneers, Dallas Cowboys and Pittsburgh Steelers’ defensive back Will Allen (seen at right above) has certainly found that out. Allen, whose full name is Willie James Allen and who was a 2004 fourth-round pick out of Ohio State, keeps being confused with former New York Giants, Miami Dolphins and New England Patriots defensive back Will D. Allen (a 2001 first-round pick out of Syracuse, seen at left above) who’s been in the news recently following his 2015 arrest for fraud amidst allegations that he was running a $31-million Ponzi scheme centering on loans to athletes. As Willie James Allen told ESPN’s Jeremy Fowler, numerous media outlets have run his picture with stories on the other Allen since then, creating plenty of problems for him:

Willie James Allen was relaxing at home last Monday night. After a meal, he reviewed materials for the Will Allen Foundation’s Holiday Giving Program.

Then he checked his phone, and the nightmare that began in April 2015 resurfaced. At least 10 messages from friends and family were alerting him that the case of mistaken identity had returned.

The former NFL safety saw his playing picture plastered across the Internet next to headlines that said “Will Allen” was the perpetrator of a wide-ranging Ponzi scheme and had swindled many people, including former athletes, out of millions of dollars.

And just like in 2015, his stricken mom was incredulous, asking him how this could happen. She was one of the first to call.

And then came the hateful Twitter messages from people telling him to “do your time and quit being a criminal,” Allen recalled.

Allen tried not to panic but admits he was devastated. The whole ordeal felt like a “gut kick,” he said. His stomach was uneasy. He didn’t know what to say. Eventually, he prayed for guidance.

“That’s what makes it so difficult — to question my character,” Allen, 34, told ESPN.

But when several outlets, including ESPN, featured a picture of Allen the former Steeler with its headline last week, on Nov. 21, Allen decided to sleep on the issue after saying a prayer — and then he took a few steps to correct it. He took to Twitter to highlight the misidentification and the damage done to his reputation. He posted several pictures of himself doing community work with the message, “This is who I am!! Not a criminal!!”

Photos are easy to get wrong, especially if you’re just searching for “Will Allen” and know that he played in the NFL, but don’t know that there are two recent players by that name. However, as this story shows, there are plenty of consequences to this kind of misidentification. Allen’s far from the first figure in the sports world to have to deal with this kind of mistaken identity (see also Gerry Sandusky, Tom Hart and Micah Johnson for a few), but these incidents can be highly damaging, and media should be incredibly careful to get it right when describing criminal cases given the stakes. It’s good to see ESPN make at least partial amends for their mistake with a story like this, showing the consequences of a photo error. Hopefully, they and other outlets will use photos of the correct Will Allen when Will D. Allen’s sentencing comes around in February.