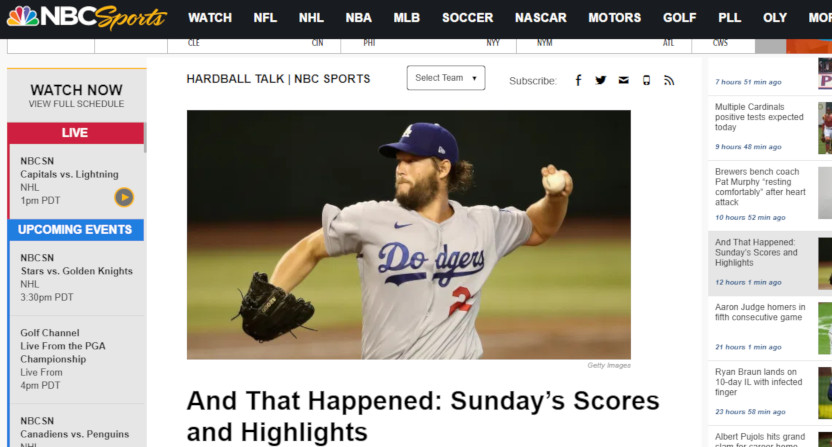 Some personal news: After 11+ years at NBC, @HardballTalk is officially no more and I'm out with it. I want to thank @NBCSports for a hell of a ride and HBT readers for riding along.

My ride's not over, though. Updates soon, but you're not rid of my opinions just yet.

Like @craigcalcaterra, I am now a free agent. I have only good things to say about my time at @NBCSports. They treated me well and I am so proud to have worked for them. I feel like all of us did incredible work there that not a lot of other places were doing.

This also impacts writers who were previously furloughed, including Hardball Talk’s Nick Stellini:

I only got to work with Craig and Bill at HBT for a few months before the pandemic and my furlough, but it was a real honor. I'm sad to see the site go and my thought are with everyone who's gotten laid off today. https://t.co/ZPHeK9lL3y

At College Basketball Talk, long-time writer and editor Rob Dauster announced that he had been laid off:

Ten years ago, NBC Sports took a shot on me when I was nothing more than a bartender with a blog. It was a fun decade, and we did some really great things there, but COVID has come for me. Today was my last day running CBT. I was laid off this morning.

At College Football Talk, writer and editor John Taylor (the only staffer left after months-earlier pandemic furloughs of the site’s three other main writers, Kevin McGuire, Bryan Fischer, and Zach Barnett) was also let go Monday. (McGuire also posted Monday about his furlough becoming an official termination.)  So far, we haven’t heard of the shutdowns of other NBC sites, but that remains a possibility.

AA has learned that this is part of a larger NBC Sports Digital emphasis on video, which covers reaction videos, but also particularly the game streams to the events NBC has national or regional rights to. Those have proven easier to sell advertising on in this current climate. And even decent traffic numbers for written articles aren’t necessarily enough to keep sites going at this moment given the crash of the display advertising market. And it’s also notable that this is a particularly below-expectations year for NBC thanks to the rescheduling of the Summer Olympics, which has been such a focus for them for so long.

While completely “pivoting to video” proved disastrous for Fox Sports (to a degree where they’ve even now undone that, again featuring written articles on their website), NBC doesn’t seem to be going quite that far. For the moment, it looks more like they’re pruning down their numbers of sport-specific sites. But that’s still a massive change to how they had been operating, and it’s yet another blow to the sportswriting industry, which this year alone has already seen significant cuts at Vox/SB Nation, Entercom, Yahoo (a NBC digital partner, which was key to them at one point passing ESPN) and more.

Boy, have I been dreading the day when I would have to write something like this, but here goes:

This morning, I was laid off by @NBCSWashington after 16 years. pic.twitter.com/s5TeucL5Lu

Sara Perlman, who co-hosted The Daily Line with Jenkins and Tim Murray, is another one of the NBC Sports Washington cuts:

Thank you for everything @NBCSports ♥️ pic.twitter.com/0aKRhQomWF

Got the word today that I am getting let go from NBC Sports after 2.5 years. Was really a dream to cover the teams I grew up rooting for, and we created some incredible content along the way. 1/

We’ll add other NBC cuts in as we see them. (You can tweet us at @awfulannouncing or at @andrewbucholtz.) But these are certainly some notable moves, and they spell big change for both NBC Sports Digital and NBC’s regional networks. And it’s interesting to see those changes coming now, at a time where many professional sports have again started up and where college sports are talking about resuming. The move away from some of these sports-specific sites may lead to NBC being a much smaller player in coverage of those sports.

Cuts also hit NBC Sports Chicago, as per the Chicago Tribune. The Trib reports that the network has laid off Leila Rahimi and Laurence Holmes, while also cancelling daily roundtable show Sports Talk Live. Additionally, “at least one producer, a video editor, two camera people, and some marketing people” were let go, again per the Tribune and reporter Phil Rosenthal.

Roughly 20 people from NBC Sports Boston have been let go, per Chad Finn of the Boston Globe.

Among those let go are Abby Chin and Gary Tanguay. Those staying on include Trenni Kusnierek, John Tomase, Tom Curran and Phil Perry. Trying to confirm everyone individually, but make no mistake, its a bloodletting. (The company may keep on some they are laying off for 60 days.) https://t.co/sEfysqnklh

And at least 17 NBC Sports Bay Area employees have been laid off, as per Steve Berman of The Athletic.

NBC Sports Philadelphia Phillies reporter Gregg Murphy, currently off air with COVID-19 symptoms, was let go, per the Philadelphia Inquirer, though he’ll finish out the 2020 season. The Inquirer’s Rob Tornoe reports that “at least 15 staffers” got pink slips. In addition to Murphy, senior director of communications Maureen Quilter and digital editor Enrico Campitelli were laid off. Most of the Philadelphia-based layoffs came to either digital reporters or behind the scenes personnel, but on-air employees (like Murphy) were included, though they’ll stay with the network through the end of their contracts, which end with the seasons of the teams they cover.

UPDATE: Per Crossing Broad, Eagles insider Derrick Gunn is also out at NBC Sports Philadelphia. Possibly more troubling is this note from the site.

Additionally, we’re being told that NBC regional networks will be doing away with sideline reporters entirely, once the current basketball and hockey seasons are over.

If true, that means that several more on-air personalities across all of NBC’s RSNs will be out of jobs once the sports they cover come to an end. That is a devastating turn of events.