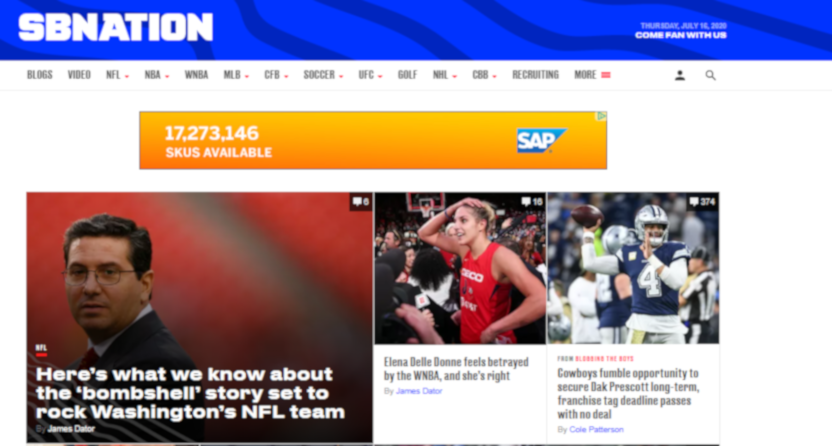 The latest round of Vox Media cuts (first reported by Alex Sherman at CNBC Tuesday) have landed, and as expected, they’ve done additional damage to Vox’s main sports site of SB Nation (their additional college football site, Banner Society, already saw half of its masthead taking buyouts after being furloughed. Many of the latest cuts, which total six percent of Vox Media’s remaining workforce, impact those who were already furloughed from May 1-July 31 (and who hadn’t already chosen to take buyouts), but the cuts also impact some employees who weren’t previously furloughed.

Variety‘s Todd Spangler writes that “The layoffs are mostly affecting editorial positions at real-estate site Curbed and sports property SB Nation, support functions like IT and office operations, and events staff,” further illustrating just how hard this is hitting the sports side. Here is Vox Media CEO Jim Bankoff’s memo on the cuts, via Josh Sternberg, which reveals that they’re only bringing back “close to 30 percent of furloughed employees who did not take buyouts”:

Vox Media laying of 6% of staff, according to memo from CEO Jim Bankoff: pic.twitter.com/y7iKUoRvVJ

Here is the Vox Union statement, which includes that they proposed several non-layoff solutions management rejected:

A statement from the Vox Media Union committees on today's layoffs pic.twitter.com/XwRaU9ua7Q

As we’ve discussed before, Vox used SB Nation as the foundation for their whole company, and now they sure seem to be abandoning it in favor of their other verticals. And with many North American sports either resuming play or preparing to resume play, they can’t even use Bankoff’s April logic of sports being an area where “short-term demand would be lower.” That logic was questionable even at the time, but it’s obviously false now; there’s tons of demand for sports coverage at the moment, but that’s not stopping Vox from further cutting what remains of their sports properties (which were already devastated by the losses of all the furloughed people who already took buyouts). Here are some of the sports people affected by this latest round of layoffs, starting with college football writer and editor Alex McDaniel:

I found out this morning I’ve been laid off by Vox Media.

Working at SB Nation changed my life. I got to work with intimidatingly smart, talented people and I’ll always be grateful they gave me a shot.

I am EXTREMELY available for hire.

I've officially been laid off by Vox Media. my "last day" is July 31, though I've been on furlough since May 1.@SBNation was a good website, and I hope the people are even half as warm and creative wherever I go.

I worked there for nine (9!) years. that's pretty cool.

Long-time SB Nation writer and editor James Brady, who was most recently on the NFL team:

Though I hoped desperately that this wouldn't happen, after 12 years of hard work and a three-month furlough from SB Nation/Vox Media, I am being laid off.

Don't have it in me to say anything else right now. Anybody who knows my history with the company knows how gutted I am. 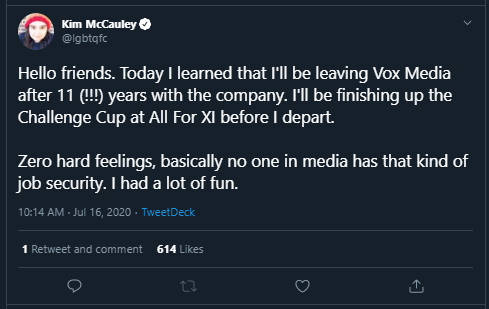 too many people to thank for their help, but i am immensely better having worked there https://t.co/o9Q7pNESxp

We’ll add more names to this list as we see them.