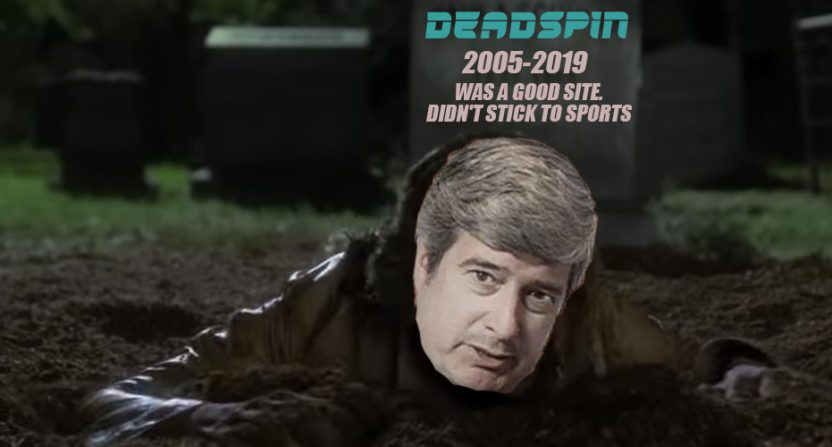 Like it or not, Deadspin has restarted publishing content for more than two months now. How such a popular, relevant, and successful property went dark for more than four months is one of the wilder back stories imaginable for a publisher, and includes the following bizarre incidents.

The oddities outlined above lead us to today, with private equity group Great Hill Partners currently owning Deadspin and its parent company, G/O Media.  Great Hill Partners easily could have just walked away and allowed Deadspin to shrivel up and die, much like Grantland and FanHouse. Another, potentially simpler, way to go would be to explore a sale of the site to a publisher that didn’t have such a negative stigma. Instead they’ve opted to lick their wounds and attempt to resuscitate a popular website that many believe truly died last October.

Removing any actual critiques of the content itself (at least for now), traffic data from Comscore, the most trusted and widely cited traffic monitoring service, shows that the relaunch has definitely underwhelmed. 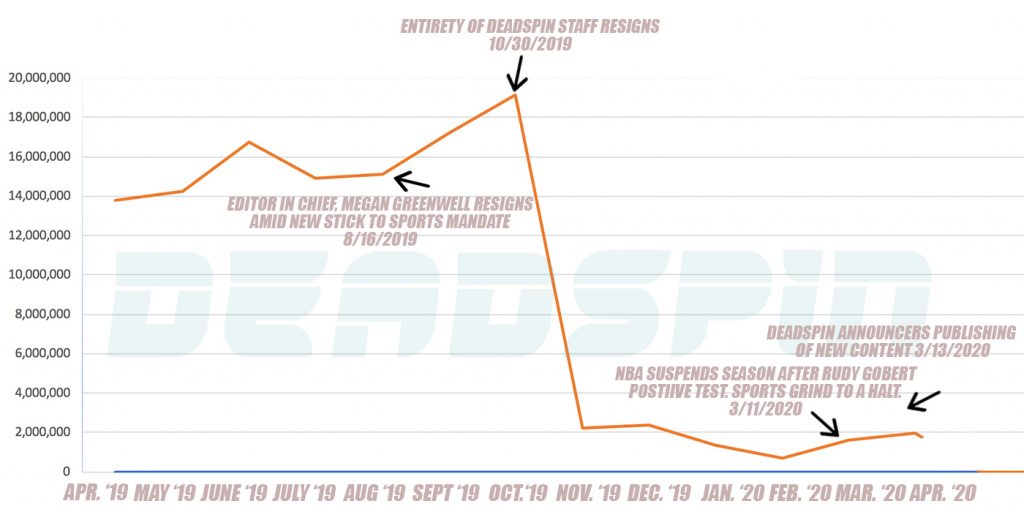 If you’re straining your eyes to see the graph above, Deadspin’s traffic (per Comscore) generally hovered in the 14-17 million monthly unique visitor range for almost all of 2019. Deadspin’s best month over the last year was last October, when the site climbed to over 19 million unique visitors right as the mass resignations of the site’s entire staff took place.

With the site dormant, traffic understandably fell off a cliff, with November and December clocking in a bit over two million monthly UVs apiece. January saw the downward trend continue with under 1.4 million UVs, while February marked rock bottom with 717k visitors. Such is the decline of a dormant site.

As for the relaunch, Deadspin’s relaunch came on March 13th, with live sports having been shut down across the country in the previous days. Deadspin’s first calendar month back (again, not a full month, and without live sports) saw the traffic climb to 1.62 million UVs an increase of just under a million visitors from the previous month. A full month of publishing content saw the UVs rise to 1.955 million people on the site in April. In the first full month under Deadspin’s new publishing team, we can see in the data that the site’s readership was just 10.22% of Deadspin’s readership in the last month under the prior editorial regime which plots a bit of an ominous datapoint for Great Hill at such an early stage.

There's an article on the front page of Deadspin that has been there since Wednesday. It has 500 pageviews.

The baseline number of pageviews—that is to say, the absolute minimum any post could expect to get—was 10,000 while I was there. https://t.co/vmwrIYRMeD

While I imagine some cackling at such news, there are a few qualifiers that must be said.

The goal of this article was to get some insight into how Deadspin thought the process was going. I was particularly hoping to speak with Rich, who has already been promoted to G/O’s Editorial Director, and/or Eric Barrow, Rich’s replacement as Deadpin’s editor in chief.  How did they think things were going? Are their internal numbers actually better? Are they looking to regain old Deadspin fans, or looking to reach new readers? What have they learned after roughly ten weeks? When would Deadspin be fully staffed, and when can we judge it as more than just a rushed work in progress? Who is this site targeting as readers?

After trying multiple avenues (PR, current staffers, and Twitter DM), neither Rich nor Barrow opted not to participate, although both did share some thoughts in a recent interview with something called Folio Magazine this week. The lack of access was rather disappointing, as I thought a more substantive interview would have provided them an opportunity to set expectations about the relaunch, and potentially persuade those who have given up on the site to give it a second look.  I certainly understand their decisions not to participate, given how toxic the general reaction “new Deadspin” has received as evidenced below.

A few weeks in, what are your thoughts on new Deadspin?

It was my hope that with the traffic data and an honest conversation from those steering Deadspin’s rebuild, we’d have a bit of blueprint as to what were realistic expectations going forward as things change fast in digital publishing. Jason Whitlock was once the editor in chief of The Undefeated. Fox Sports completely shunned written articles, and now it’s slowly ramping up that editorial operation, with the realization that they were misguided in the video-only approach. Perhaps there was a viable path most can’t see for Deadspin to put the toothpaste back in the tube incrementally over time and win back its former standing.

One of the things that was most interesting to me was did Deadspin actually need to return to its former editorial form in order to be considered a success. In a column last November, Deadspin founder Will Leitch alluded that Deadspin could easily morph into a content mill like the Mavenized Sports Illustrated model. That model is basically the Forbes model, which was implemented when many former G/O Media executives worked at Forbes. In short, the Forbes/Maven model relies on producing juiced up SEO content at a lower cost and higher volume, and attaching that to a memorable brand with the goal of fooling readers (and also aloof advertisers who never know better).

I guess I missed that Vichy Deadspin has decided to augment their unedited, error-filled content by turning every article into a slideshow.

At least Bleacher Report's excuse was that they didn't pay anyone pic.twitter.com/3UomcaRmiR

Bleacher Report sold to Turner for nearly $200 million, with most of its content being truly awful, while also being notorious for long slideshows that ranked highly on Google. From a pure business perspective, that would very much qualify as a success should it turn a tidy profit, and perhaps new Deadspin would just aim for some type of less obvious bullseye opposed to the very small one of recapturing its former voice without having anyone who built Deadspin’s voice even remotely involved. Perhaps there are enough people who like Deadspin enough on some level to remain an active visitor and follower, but are totally oblivious to what’s transpired behind the scenes (similar to not knowing if a favorite celebrity, distant family member, or long forgotten friend is still alive).

Coverage of the NFL draft from the new "Deadspin" has so far included mistakes like "With pick #26, the MIami Dolphins drafted D'Andre Swift." (In reality, pick #26 saw Green Bay take Jordan Love.) https://t.co/yu50sQrtiT

Two months in, I can personally say the site hasn’t registered with me much at all, even putting aside its recent history and any moral concerns about supporting the site.  The two biggest hooks the site had for me were always its sharp headlines and an always clever social media strategy, both of which have been noticeably lacking. There is even a popular theory that the really weird social media strategy is perhaps purposefully bad in some type of brilliant trolling strategy that is somehow beneficial. While a recent upswing of a more active social media presence has largely nixed that theory, it’s still disconcerting that for quite awhile, the site just dumped links onto Twitter and Facebook without a tease on why to read, a practice that isn’t followed by any other G/O site (or really, many large websites). 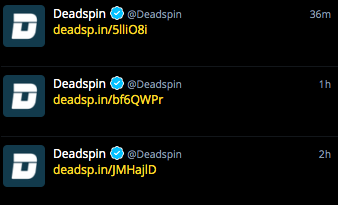 Some of the sharpest criticism has come from Timothy Burke, a long-time Deadspin staffer. I’ve sprinkled a few of Burke’s more astute observations about the relaunch into this article, and he also shared the following assessment of how he viewed the relaunch with me.

“I find Neue-Deadspin baffling. Even people who did some good work before arriving there have suddenly lost any ability to write effectively. It’s remarkably consistent in that it misses the mark on every post, in the same way, every time. It’s as if you decided to remake a movie based not on the script of the original or, you know, watching it, but instead reading the Wikipedia article about that movie.”

To balance out Burke’s opinion I sought out someone that was in the 3.2% of our poll respondents who thought the new Deadspin had potential (tracking someone down willing to talk proved no easy task). Enter Jeff in Chicago, who shared the following with me.

“It’s not as good, but I’m trying to like it because there aren’t a lot of good sites and I liked having a dependable site like a Deadspin rather than going to a lot of different sites to find stuff to read. It’s also less angry now, which I like, and it’s trying to get better so I’ll keep checking it out for now. Things take time, you know?”

Are there enough people like Jeff out there to sustain Deadspin going forward? If we did a similar poll in six months, would the new Deadspin show it’s made enough progress to warrant Great Hill doubling down on the site? Without sports, and a full team of writers (I’m told the site is nowhere near fully staffed), I think it’s probably too early to think that the new Deadspin will be a short-lived reincarnation we’ll snicker at years from now.

With that being said, this current pandemic has made the digital media landscape a significantly more difficult business to operate in, even without the baggage that relaunching Deadspin already brought to the table. Traffic numbers do indicate some type of positive trajectory, but with ad rates declining, will it be enough? Jeff is right that things take time, but what’s not clear is if ownership will give Deadspin enough time to find its footing, or if the site’s relaunch was indeed an impossible mission that is already on borrowed time.