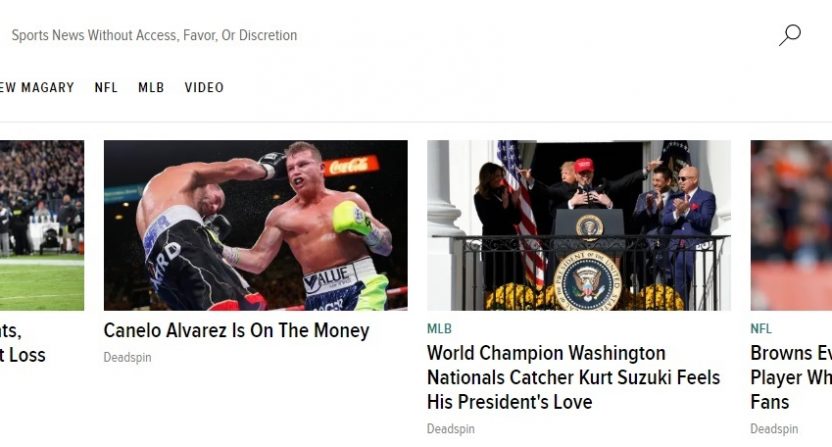 G/O Media editorial director Paul Maidment, who started the site’s decay over the last three months by insisting they stick to sports, has resigned from the company.

According to a memo to the company’s staff, obtained by The Daily Beast, Maidment claims his departure is because he will “pursue an entrepreneurial opportunity”.

“I wanted to let you all know that effective immediately I have resigned my position as Editorial Director of G/O Media. It is the right moment for me to leave to pursue an entrepreneurial opportunity,” Maidment wrote in a memo to staff. “I admire the journalism that you produce and the unique voice that is otherwise missing from mainstream media. It has been a great honor and I wish you all the very best. I am certain that the sites will grow and thrive in the future.”

Back in August, Deadspin editor-in-chief Megan Greenwell left the company as Maidment insisted that the site would be “laser focused” on sports. After a largely uneventful couple of months, Maidment again beat the “stick to sports” drum last week while the Deadspin staff complained about autoplaying video ads, resulting in the firing of deputy editor Barry Petchesky while Maidment again claimed the site had an “incredibly broad mandate“. The rest of the site’s staff followed Petchesky out the door last week, and one freelancer lasted for one post after the resignations following social media blowback.

This is pretty much the worst case scenario for both G/O Media and Deadspin. Maidment and G/O Media tried to change Deadspin and mold the site to their own wishes, and the staff called the company’s bluff. Maidment attempted to create content on his own for the site following the mass resignations (reportedly authoring bland posts with boring titles like “Lamar Jackson Shellacs Pats, Handing New England First Loss” and “Dolphins Dent Pursuit Of Being NFL’s Worst Team, Perhaps Ever”), and given his quick resignation, one can assume that those posts didn’t move the needle like management expected or desired. Now, G/O Media has a site with no staff, and no editorial director attempting to guide Deadspin’s direction going forward.

What’s going to happen next? That is anyone’s best guess, but I think there are four possible outcomes, none of which is ideal for G/O Media. The first option is to simply shut down Deadspin, much like they did last month with Splinter, the company’s political/news vertical that was also part of this past spring’s acquisition (along with Deadspin, Gizmodo, etc) by Great Hill Partners. Option two would be for G/O Media to keep Deadspin (or a new sports vertical with a different name) alive with a brand new staff, which could be a tough sell (especially with how Alan Goldsher’s brief tenure went). The third option could be to sell the Deadspin brand to another company, though there is no guarantee that a new owner would revive Deadspin (see: Bryan Goldberg’s acquisition of Gawker, which still hasn’t resulted in a relaunched site after more than a year).

The fourth, and final, outcome is the one that is probably the least appealing to G/O Media and the most appealing to the general public. In this scenario, G/O Media would just pretend the last week didn’t happen and would offer jobs back to all of the Deadspin staffers that departed. There’s no guarantee that they’d even take those jobs, and it would be a very bitter pill for the company’s management to swallow, but given how spectacularly the last week has blown up, it would probably be the best outcome for everyone involved.

I think the most likely situation we’ll see is either option one or two, but only time will tell.