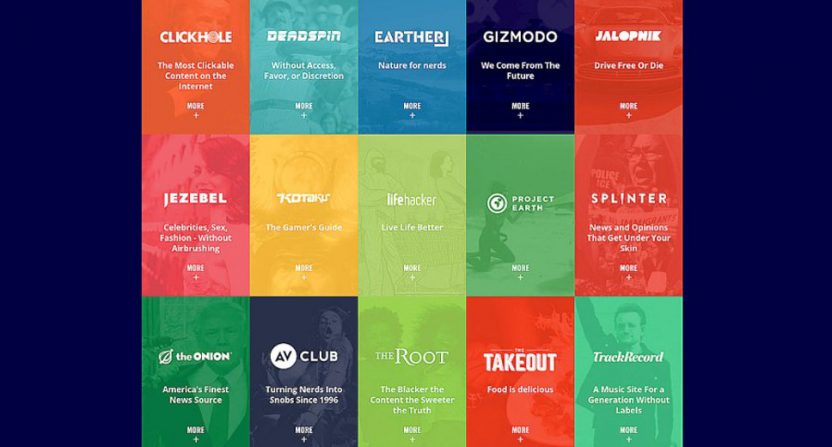 The former Gawker Media properties now known as Gizmodo Media Group have another new owner. Univision acquired those properties (including Gizmodo, Jalopnik, Jezebel, Deadspin, Lifehacker, and Kotaku) for $135 million in the Gawker bankruptcy auction (following the Hulk Hogan lawsuit) back in August 2016, but indicated last summer that they were exploring selling those sites, as well as The Onion, The A.V. Club, The Root, and others. And now, as Benjamin Mullen of The Wall Street Journal reported Monday, those properties have been acquired by private equity firm Great Hill Partners for “much less” than Univision paid.

As Todd Spangler writes at Variety, this signals a change in approach for Univision:

With the sale, Great Hill will form a new company called G/O Media Inc., headed by digital content industry vet Jim Spanfeller, who also will be a “significant investor” in the company. The sale puts an end to Univision’s bid — under then-CEO Randy Falco — to diversify beyond its Hispanic broadcasting core business into what it had hoped would be a fast-growing, young-skewing mass digital play.

…Univision had said last summer that it was looking to offload the digital-media assets. With the exit by Falco and appointment of TV veteran Vince Sadusky as Univision’s CEO, the company decided to full return to its focus on Hispanic media and marketing.

“Our aim from the outset of this process was to sell these assets as one,” Sadusky said in a statement. “We are pleased to have found a terrific buyer in Great Hill Partners that is committed to growing these properties.”

What will that mean for these sites? Well, Spangler writes that Univision said the Gizmodo Media Group and Onion sites will continue to operate as “independent assets within the Great Hill Partners portfolio,” and that “all employees of GMG and The Onion will be joining G/O Media.” That doesn’t mean there won’t be layoffs following the acquisition, though.

And it will be interesting to see what Spanfeller does with these sites. His previous work includes time as president of Ziff Davis Enterprise’s consumer magazine group, publisher of Inc. Magazine, and associate publisher of Playboy Enterprises Publishing Group, a stint as the editor in chief of Forbes.com, work at PC Magazine and RealClearPolitics, and the creation of his own Spanfeller Media Group (including The Daily Meal and The Active Times), which he sold to the then-Tronc in 2017. And an email he sent to Gizmodo Media Group staff this morning had a lot of buzzwords in it, as Madison Malone Kircher writes at NY Mag:

Spanfeller sent an email to his notoriously independent new staff this morning, saying he looks forward to meeting everyone soon and answering their (likely many) questions. Including ones about editorial independence: “While editorial independence is critically important, there needs to be a healthy and productive partnership with the business side for the company to be truly successful,” Spanfeller wrote. “Without an audience we have nothing to offer advertisers, eCommerce partners or subscription efforts. And without the revenue from those sources we have no way to fund the content and those who create it that attracts that audience in the first place.” He also explained he wants to establish a new set of company values and laid out a rough draft of his ideas. “Feel free to help make these better and perhaps more attuned to G/O Media.”

·    We are action oriented. When faced with an option of action vs. in-action, we always choose to DO SOMETHING.

·    We believe in our people. We respect our teammates. We know that if they “do something” they will, much more often than not, DO THE RIGHT THING.

·    We are ambitious. Both as a company and as individuals. We want our people to always be looking to take the next step up in everything they and we do. To BE GOAL ORIENTED.

·    We respect and value our customers. Without visitors, we would have no marketing partners, without marketing partners we could not serve our users. To protect both of these very important groups we do business WITH THE HIGHEST LEVELS OF INTEGRITY. In how we deliver content and in how we conduct our day to day business activities.

·    We want our work environment to be one where people can BE PASSIONATE AND HAVE FUN.

At any rate, it’s certainly notable to see the Gizmodo titles exit Univision for a new owner. The combined Gizmodo/Onion sites have 100 million unique visitors per month as per the company’s release, so they remain a significant player on the web. But the “much less” price than the $135 million Univision paid for the Gawker assets (not counting what they paid for their stake in the Onion sites) after almost a year of searching for a buyer illustrates the wider challenges out there in the digital publishing world. We’ll see what’s next for the Gizmodo titles.