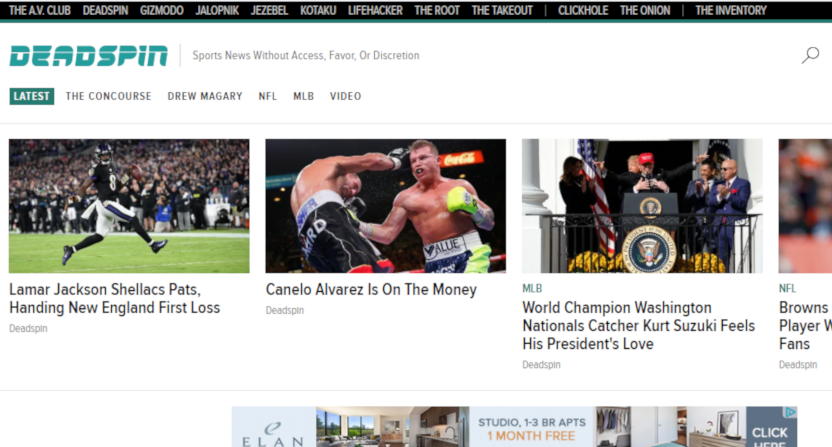 Over two months after the last post was published on Deadspin (Nov. 4’s unbylined “Kellen Winslow Jr. Takes Plea Deal To Avoid Life Sentence“), and longer still after the last posts published by anyone actually at Deadspin before the mass resignations in protest over the firing of deputy editor Barry Petchesky (that would be Nov. 1’s “Thank You” and “Deadspin Up All Night: Spanish Flea“), both by Diana Moskovitz), G/O Media is still trying to restart the site. (Its homepage on Friday, Jan. 10 is seen above; those stories are all from November.) And the latest move from G/O Media and CEO Jim Spanfeller is creating further controversy.

G/O Media’s new plan, as per a letter Spanfeller (a key figure in two lawsuits against G/O Media over alleged mistreatment of female executives) sent the GMG Union Friday, involves shifting “Deadspin” (which at this moment, does not exist beyond its URL and its archives) to Chicago. It also involves putting “Deadspin” under The Onion group and their union (separate from the GMG Union at the New York-based sites, including the former Gawker sites), insisting that the GMG Union “not engage in further conduct directed towards job applicants” (after vast public shaming caused freelancer Alan Goldsher to give up on writing at Deadspin less than an hour after his first piece was posted; that piece remains the only bylined piece on the site since Moskovitz’s final post), and also saying they’re abandoning wider talks with the union about editorial independence. Here’s the letter Spanfeller sent the union Friday about this plan, via Ben Mullin of The Wall Street Journal:

And here’s the union’s response:

Interestingly enough, two prominent Kotaku writers (Joshua Rivera and Gita Jackson) announced their departures Friday, and both had strong criticisms for Spanfeller (and specifically, his handling of the Deadspin situation) in their exit posts. So it’s worth keeping in mind that the moves with Deadspin aren’t just about the future of that site, but that they’re also being closely observed (and in many cases, criticized publicly) by writers at other G/O Media properties. And that seems likely to continue following this attempt to relaunch Deadspin.

Beyond that, there are good reasons to think that an attempt to relaunch Deadspin with new writers isn’t going to go well regardless of if the new site is based in Chicago rather than New York. Even if Spanfeller is actually able to convince GMG Union members to stop criticizing new Deadspin hires, there are plenty of people out there on the internet who don’t work for Spanfeller who will likely be ready to bring that criticism themselves. That certainly happened with Goldsher; it wasn’t just GMG staffers blasting him for going to work at Deadspin after their staff resigned in protest, but a wide swathe of the internet. And the reaction to any new hire is likely to be similar, especially with Spanfeller saying in his letter that Deadspin “will remain a dedicated sports platform” (which it never was; the attempted “stick to sports” mandate went against what actually drew traffic on Deadspin, and it’s a big part of what led to the staff protests and resignations).

Anyone who works for the new “Deadspin” is going to take a lot of criticism for it, especially at first, even if Spanfeller is successful in getting WGA East members to not weigh in. And that’s going to turn away a lot of applicants. Of course, given the numbers of people looking to get paid for writing about sports, there may still be some people who decide it’s worth the public shaming and the possible negative future career impacts. But they’re probably not going to be the best writers out there.

And what’s even more important than who winds up writing for this “Deadspin” is if anyone will actually read it beyond some initial hate-clicks. It’s clear that Spanfeller’s vision of “Deadspin” isn’t actually going to be what Deadspin was at any point in its history (remarkable, considering how many different things Deadspin was at different points), and it doesn’t sound like it will be anything worth reading. And the current value of Deadspin.com (which is really all Spanfeller and G/O Media own here, given that the entire staff of Deadspin quit) alone is questionable at best; the site’s traffic dropped from 19.1 million unique visitors in October to 2.2 million in November amidst the mass resignations and the eventual stopped updates, and a lot of those remaining clicks were likely from people gawking at the trainwreck and/or reading favorite pieces from the archives. A relaunched “Deadspin” may not get even that much traffic after the first wave of hate-clicks subsides.

At any rate, it’s certainly interesting to see this kind of corporate drama playing out in public, and to see Spanfeller vowing to go ahead with something that’s going to take a lot of public heat. And it’s also interesting to see the union still firing back in strong terms. All definitely isn’t peaceful at G/O Media these days, and an attempt to relaunch “Deadspin” isn’t going to help with that.