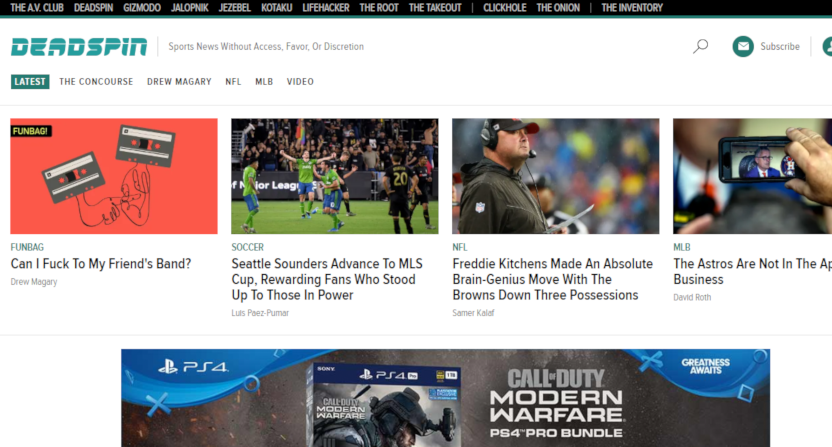 Many of Deadspin’s staffers have now left the company in protest of actions by parent company G/O Media. This week started with G/O Media (part of venture capital firm Great Hill Partners, which bought Deadspin, the former Gawker sites, and other sites including The Onion and The AV Club from Univision back in April) send out a memo Monday reiterating that they wanted the site to only cover sports, a giant contrast to its previous existence. G/O Media also removed a post from Deadspin and Kotaku that featured staffers from across the G/O properties complaining about autoplaying ads on those sites.

Deadspin then featured many of their posts that were not about sports, and long-tenured Deadspin deputy editor Barry Petchesky was fired Tuesday, with G/O Media editorial director Paul Maidment again insisting that the site should “be focused on sports coverage.” Senior editor Diana Moskovitz also announced she was leaving Tuesday. And over Wednesday, Thursday and Friday, the rest of the staff announced that they were leaving.

I quit today too https://t.co/W7meIcW0Cx

I will also be leaving Deadspin. It was the best four years of my life, and I will miss my pack of wild dogs dearly.

hi, so I'm leaving Deadspin. it's been the best two and a half years of my life, but it's time to move on

Just now I resigned my position at Deadspin today along with many of my colleagues. I have been here only five months but they have been some of the best of my career and I will miss it deeply.

OFFICIAL STATEMENT: I have self-yeeted from Deadspin

Deadspin’s new owners wouldn’t publish my Wildwood boardwalk t-shirt column this summer. I should have quit months ago, instead of just now.

this will be my only tweet ever: my deadspin days are over. if any editor’s interested in the story i took too long to file, on an independent women’s basketball league put out of business by the nba—a story of people in suits killing something with a soul—email me, won’t you?

Anyways, I’m done writing for Deadspin (being a permalancer means there’s no official resignation process) so if you’re interested in hiring someone to do some sports writing/blogging hit my line: gabe.fernandez1819 @ gmail dot com

I've tendered my resignation from Deadspin. You can listen to the Deadcast if you want to learn more about why, or you can ask me in a few days or something.

This is where I leave you. https://t.co/YDcGbwZEEM

Here’s something I never thought I’d say: I just quit my dream job at Deadspin.

The last 11 months were the best I’ve ever had, and working with the smartest writers on the internet was a privilege.

I just quit, too. Deadspin was a good website.

it was three years of big dumb freedom. i just resigned from Deadspin pic.twitter.com/rAd68r4cki

i have quit my job at Deadspin.

As of Wednesday, the site’s masthead had Petchesky at the top (after editor-in-chief Megan Greenwell resigned in August, citing interference from G/O Media on several fronts including the “stick to sports” one), with Kalaf as managing editor, Ley as features editor, Moskovitz as senior editor, and McQuade as staff editor. Wagner, Theisen, Redford, Thompson, McKinney, Burneko, Paez-Pumar, and Nathan were all prominent staff writers, and Anantharaman and Fernandez were weekend contributors, while Roth was an editor at large and Magary was a columnist. Also, while Dave McKenna isn’t on Twitter, Moskovitz posted Friday (in a piece that management later appears to have moved back to an Oct. 1 publication date) that he was leaving as well:

“This the final Deadspin transaction before relegation. As the last editor left with access to our work systems, I’m promoting Dave McKenna to editor-in-chief of Deadspin. This should come as no surprise given his career stats: multiple dirty politicians brought down, evil sports owners exposed, and more wild stories than you’d think were possible. He was writing Deadspin blogs before Deadspin existed.

McKenna has graciously agreed to accept his new position until the end of the day (this is his last day). Please note that Dave McKenna was the last EIC of Deadspin.”

The GMG Union (representing writers at the G/O sites, with their name based on its former name of Gizmodo Media Group) also put out this statement:

A statement about the resignations at Deadspin. pic.twitter.com/NrUmtHzZbq

Meanwhile, management has turned off comments on Deadspin posts:

oh my god they took the comments off of deadspin

G/O Media also threw out this statement, via Maxwell Tani of The Daily Beast:

G/O spokesperson on Deadspin resignations: "They resigned and we're sorry that they couldn't work within this incredibly broad coverage mandate. We're excited about Deadspin's future and we'll have some important updates in the coming days."

We’ll see what this leads to for Deadspin, and for the employees who exited. Many mentioned on Twitter that they’d fund a site with these writers via Patreon, but other companies may also look to pick up these writers. Meanwhile, Deadspin itself now has a lot fewer prominent writers than it did when this week began.