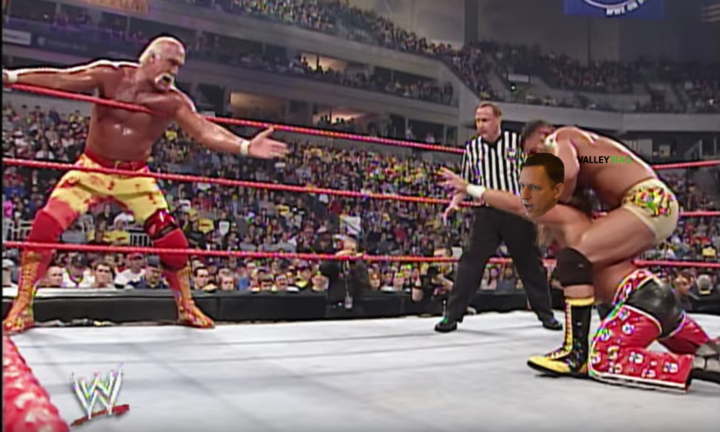 The idea of a shadowy third party funding Hulk Hogan’s lawsuit against Gawker was initially called  “rather conspiracy-theory like” by Gawker founder Nick Denton, but now it’s turned into an solid concept that even includes an allegation of the specific person involved; Silicon Valley billionaire and frequent Gawker/Valleywag target Peter Thiel. The concept gained some momentum Tuesday when Andrew Ross Sorkin of The New York Times published a piece exploring the idea, including Denton’s comments that recent developments were making him wonder if it was true, and then fully exploded Tuesday night when Forbes’ staff writers Ryan Mac and Matt Drange published a piece quoting sources who say Thiel is behind Hogan’s lawsuit:

One of Silicon Valley’s best-known investors has been footing a former wrestler’s legal bills in lawsuits against a shared enemy.

Peter Thiel, a PayPal cofounder and one of the earliest backers of Facebook, has been secretly covering the expenses for Hulk Hogan’s lawsuits against online news organization Gawker Media. According to people familiar with the situation who agreed to speak on condition of anonymity, Thiel, a cofounder and partner at Founders Fund, has played a lead role in bankrolling the cases Terry Bollea, a.k.a. Hogan, brought against New York-based Gawker. Hogan is being represented by Charles Harder, a prominent Los Angeles-based lawyer.

The involvement of Thiel, an eccentric figure in Silicon Valley who has advocated for teenagers to skip college and openly supported Republican presidential candidate Donald Trump, adds another wrinkle to a case that has garnered widespread attention for its implications over celebrity privacy and a publication’s First Amendment rights. During court proceedings, which ended in late March with a $140 million victory for Hogan, there had been rumors that a wealthy individual had funded Hogan’s case though there was never any hard evidence that surfaced to prove that was true.

This is a fascinating report, as Thiel (who Forbes estimates is worth $2.7 billion) would certainly have the money required to put up a years-long legal fight against Gawker, and he would also appear to have the motive. Often, third-party funders of lawsuits are betting on receiving a percentage of the judgement, but while Thiel may or may not get some of the money Hogan’s been awarded (if that holds up on appeal), Mac and Drange write that he may have significant non-monetary motivation based on what Gawker and Valleywag have written about him:

Money may not have been the main motivation in the first place. Thiel, who is gay, has made no secret of his distaste for Gawker, which attempted to out him in late 2007 before he was open about his sexuality. In 2009, Thiel told PEHub that now-defunct Silicon Valley-focused publication Valleywag, which was owned by Gawker, had the “psychology of a terrorist.”

“Valleywag is the Silicon Valley equivalent of Al Qaeda,” Thiel said at the time.

And, as The Verge’s Casey Newton noted,  Denton commented on the 2007 piece outing Thiel that Thiel had threatened Denton if he ran anything about his sexuality:

“He was so paranoid that, when I was looking into this story, a year ago, I got a series of messages about the destruction that would rain down on me, and various innocent civilians caught in the crossfire, if a story ever ran.”

So, yeah, that sounds like a guy who may have an axe to grind. Thiel has received significant negative press in recent years, and that’s particularly true when it comes to the losses his funds took around the housing crisis, as illustrated in this 2011 Bloomberg piece:

Peter Thiel got rich investing in PayPal and Facebook Inc. before most people knew them, built a hedge fund that at its apex managed $7.2 billion, and forecast the collapse of the U.S. housing market. He also lost almost two-thirds of his clients’ money.

Clarium Capital Management LLC, which Thiel started in 2002 in San Francisco, fell about 23 percent in 2010, the third straight year of declines, according to investors. His fund’s assets are down about 90 percent and clients who stuck with him suffered losses of 65 percent from the mid-2008 peak.

That piece also illustrates that Thiel has previously taken interests in a wide variety of fields, not just money-management:

A self-styled freethinker, Thiel practiced securities law, traded derivatives, co-founded PayPal and started his hedge fund, all before the age of 40. A U.S. chess master, he co-wrote a book criticizing political correctness, backed an unsuccessful Nascar magazine and was executive producer of the 2005 movie “Thank You for Smoking,” a satire about the culture of spin.

So, Thiel may make some sense as the third party here. There’s no on-the-record confirmation, but Mac and Drange would seem to have pretty good sources. The other interesting thing to consider is if Thiel may be backing the other lawsuits against Gawker, too, from Shiva Ayydurai (who claims to have invented e-mail, and was mocked for that by the site) and writer Ashley Terrill (who says the site published “a false and highly defamatory hit-piece” about her). Both are also represented by Harder, who represents Hogan. Forbes’ piece says “It is unclear if Thiel is helping to fund Ayydurai or Terrill’s cases against Gawker,” but you can bet that will receive some further investigation now Thiel’s name has been put out there. The shadowy anti-Gawker conspiracy may be emerging from the shadows.