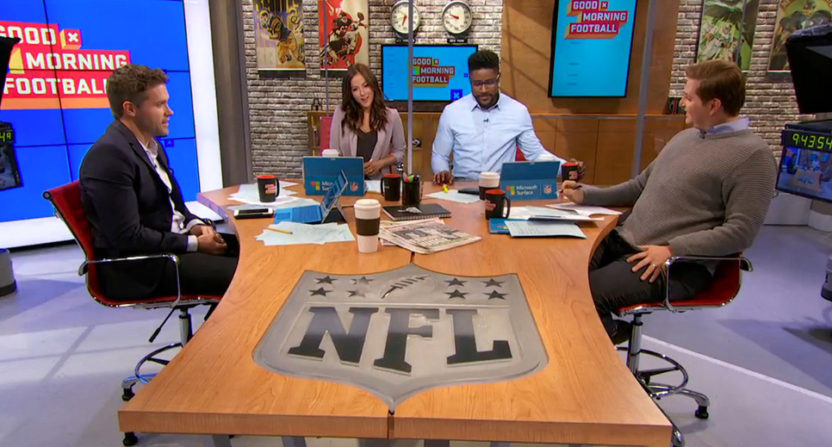 ESPN is working really, really, reeeeeaaaaallllllllllyyyyyy hard to get back in the good graces of the NFL. This weekend’s smorgasbord of NFL Draft coverage across ESPN and ABC is just the latest example of the network rolling out the red carpet for the NFL after the relationship between Bristol and the Shield hit a rough patch. If you turn on any Disney-owned network over the next three days, you’re likely to see some reference to the draft. It’ll be the closest thing in real-life to when Montgomery Burns took over all of television to get back his beloved bear BoBo.

The latest example of ESPN’s outreach to the NFL is sure to turn some heads in the sports media world. On Thursday and Friday, ESPN2 will simulcast the popular NFL Network morning show Good Morning Football from 7-11 AM ET, according to John Ourand of Sports Business Journal. Additionally, ESPN and NFLN personalities will cross over and appear on the other channel’s studio programming, all in the name of promoting the NFL Draft.

The simulcast of a league network show isn’t necessarily unprecedented. ESPN2 previously had a relationship with MLB Network from 2017 to 2018, where the Bristol network aired a simulcast of Intentional Talk after cutting back its own Baseball Tonight program. (That was a longer-term arrangement, though, and it ended late last year.)

However, even if it’s only for two days, ESPN handing over a four hour block of prime morning hours to one of their main competitors in the morning is surprising. Good Morning Football is widely revered as one of the best studio shows in sports right now that mixes analysis, humor, and pop culture extremely well. Basically, GMFB succeeded in organically creating everything ESPN has tried to spend millions of dollars manufacturing on Get Up. Doesn’t ESPN run the risk of its own viewers discovering GMFB, enjoying it more than ESPN’s own morning programming options (usually Get Up and First Take on ESPN, SportsCenter on ESPN2), and then not returning to ESPN’s networks after the draft?

Perhaps that could be the case, but clearly ESPN is valuing this simulcast as another chance to win over the NFL. This time last year, ESPN’s relationship with the NFL wasn’t doing so great. On one side, the NFL has always been rankled by ESPN’s legitimate journalistic efforts that continue to scrutinize the league’s behavior on a number of fronts. On the other side, ESPN is paying a billion dollars-plus for what is now often the third-biggest primetime game of the week on Monday nights.

The NFL even dug into ESPN’s audience by simulcasting the draft on Fox while there were rumblings that the NFL could also give them ESPN’s Wild Card playoff game. (The latter piece hasn’t yet come to fruition.) The ESPN-NFL relationship was at such an impasse that the impossible was becoming more and more plausible – NFL games could someday be off ESPN for the first time since the 1980s.

In the last year, ESPN has clearly put their business partnership with the NFL at the forefront. New president Jimmy Pitaro publicly said “strengthening our relationship with the NFL” was an emphasis of his, and there are a number of examples to prove just that from the crossover coverage of the NFL Draft and the Pro Bowl to more positive energy from the new Monday Night Football announcing crew. The last twelve months has been an all-out blitz of affection from Bristol trying to show the league that the two superpowers are better together than they are apart.

It’s no secret why ESPN is consistently going the extra mile for the NFL—their huge Monday Night Football rights contract expires in 2021, and there are plenty of potential suitors for NFL rights. ESPN clearly wants their relationship with the league to last for many years to come and are willing to do whatever is necessary to make it happen. They will just have to hope it is enough to hold off the competition for the next billion-dollar deal.