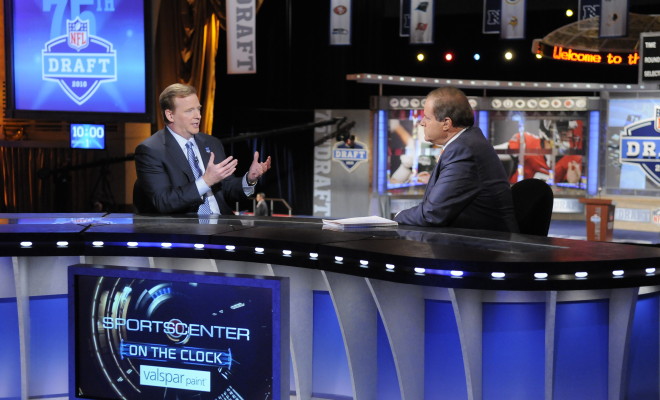 The rather rocky relationship between ESPN and the National Football League has now come to light. As we learned, the NFL is not happy with ESPN’s reporting on the league and the Worldwide Leader is perturbed over its Monday Night Football schedule (and paying $1.9 billion annually in the process), potentially losing its Wild Card playoff game to Fox and having a third network (Fox joining NFL Network and ESPN) broadcast the NFL Draft this year, once a proud exclusive for ESPN.

With all this in mind, it’s easy to think that ESPN and the NFL could be headed for a divorce.

The NFL and ESPN have been partners dating back to the early 1980s when the network began airing the Draft, thus making it a huge event in the spring. And when the NFL needed a cable partner in the late 1980s, it turned to ESPN. There’s no doubt that ESPN, through NFL Primetime and its constant coverage of the league, has helped the sport’s popularity to the point where it reached record ratings earlier in the decade.

ESPN has been a loyal partner to the NFL since it began airing games beginning in 1987 with an eight-game Sunday night package, expanding to a full 16 in 1998. Eventually, the network took over the venerable Monday Night Football franchise from ABC in 2006. ESPN was hoping that that it would have the premier primetime football franchise, but 12 years later, it hasn’t worked out that way.

According to ESPN tome author James Andrew Miller, officials with the Worldwide Leader have expressed their displeasure to the league over its weak schedule:

“…when ESPN agreed to pay $15.2 billion for its current Monday Night Football deal, some of its key executives believed they were buying the schedule of the previous MNF package, i.e., more often than not, the best game or at least one of the top games of the week. But Sunday Night Football got that pedigree, and Fox and CBS games since then have also generally been more desirable than ESPN’s matchups. With the advent of Thursday Night Football several years ago, ESPN’s Monday night schedule has been further diluted of quality matchups, and the network hasn’t been shy about voicing dissatisfaction.”

Not only did ESPN not get into the Super Bowl rotation, it didn’t get into the postseason until 2015 when it got the early Saturday afternoon Wild Card game and it wasn’t even the best matchup of the weekend.

As John Ourand wrote in Sports Business Journal, NFL executives have “described the relationship (with ESPN) as the worst they’ve ever seen,” thanks to the network’s reporting on league issues such as concussions, commissioner Roger Goodell’s salary, player protests, etc.

As incoming ESPN president Jimmy Pitaro prepares to take over the network, he has many issues to tackle, including this fractious relationship with the NFL. Previously, the prevailing belief has been that the NFL could put pressure on ESPN and the network would bow down (see Playmakers and League of Denial). Whether it was true or not, that reputation has held for a very long time.

ESPN and the NFL are still partners through the 2021 season, but with the NFL’s ratings decreasing in recent years and the MNF schedule still an issue with the executives in Bristol, one wonders if this relationship is headed for a tumultuous split. ESPN could decide that paying billions for 17 games a season may not be worth it and the NFL could look to another cable partner or even a tech company to take over MNF in the next media contract.

Or the two sides could put aside their differences and begin a period of healing. Right now, ESPN and the NFL are at loggerheads and it may take a long time to get back to where the two were once willing dance partners.

We’ll see where the relationship goes, but the two sides could elect to say “Shut up and let me go” in 2021.