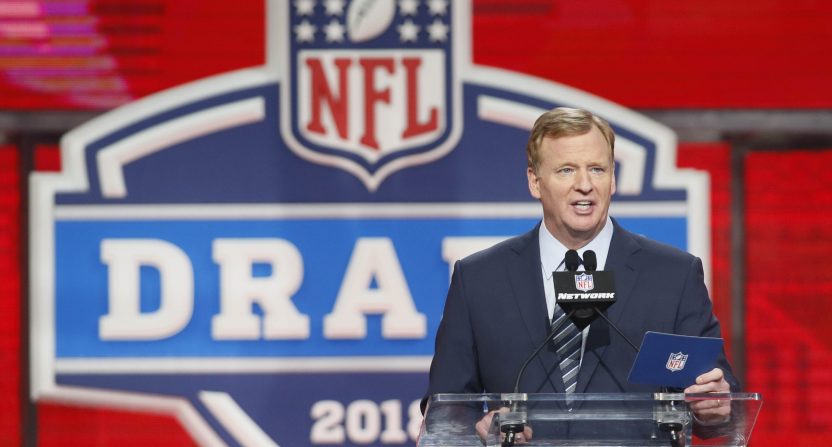 Last year, Fox aired a simulcast of the NFL Network’s coverage of the first two days of the draft. At the time, that was seen as a warning shot from the NFL to ESPN and Disney, as the relationship between the league and the network was at a low point.

New ESPN president Jimmy Pitaro has made no secret of his plan to repair that relationship, and based on today’s news that ABC will replace Fox as the league’s broadcast network partner for the 2019 Draft, it might be working. As ESPN announced in a release, ABC will be broadcasting all three days of the Draft, but it won’t just be a simulcast of the ESPN coverage:

ABC will be the exclusive broadcast home of the event and will produce its own distinct telecast for the ABC audience, separate from ESPN and NFL Network, during the first two nights of coverage. For the second straight year, ABC will simulcast ESPN’s presentation on Day 3.

The prime-time draft specials on ABC will be anchored by ESPN’s College GameDay, college football’s longest-running pregame show. ESPN and ABC personalities and other special guests will be part of the multi-night ABC presentation. The telecasts on ESPN and NFL Network will continue to offer the expert NFL analysis that passionate NFL fans have come to rely on every year.

“ESPN is constantly seeking opportunities to innovate and expand our coverage of major events and the NFL Draft is a perfect example of that. There is no better way to celebrate 40 years of working with the NFL to grow the Draft than to bring the considerable assets of The Walt Disney Company to Nashville,” said ESPN President Jimmy Pitaro. “With ESPN networks and platforms, and the addition of ABC as the exclusive broadcast home to the Draft, we will bring more resources than ever before as we introduce fans to the next generation of NFL players.”

Last year, ESPN ended up winning the ratings battle even with Fox entering the fray, and now the Disney family is being rewarded with the ABC edition, which could send the ratings numbers to new heights. As to the differences in the broadcasts, according to John Ourand of Sports Business Daily, the ABC version will be aimed at a more casual viewer:

ABC’s coverage will be tailored for the more casual fan, anchored by the “College GameDay” crew of Rece Davis, Lee Corso, Kirk Herbstreit and Desmond Howard. Davis, Corso and Howard were on ESPN2’s coverage last year, while Herbstreit was on ESPN’s main set for Day 1.

ABC will focus on the personalities and backstories of the draft picks, incorporating live musical acts into its coverage. Meanwhile, ESPN and NFL Network’s coverage will be more football-centric. ESPN’s coverage earlier this year was hosted by Trey Wingo with Mel Kiper Jr.and Louis Riddick. ABC will simulcast ESPN’s coverage on Day 3.

That’s certainly a big commitment from ESPN, and it will be interesting to see how the dual production path works in practice. Treating the Draft like a Megacast does make sense, though, given where it falls on the calendar and the nature of the event. Fox being cut out is another interesting factor, considering their obvious interest in live sports inventory.

Maybe this really is a sign that the league is as interested in repairing the ESPN relationship as Pitaro has been throughout his time in charge.