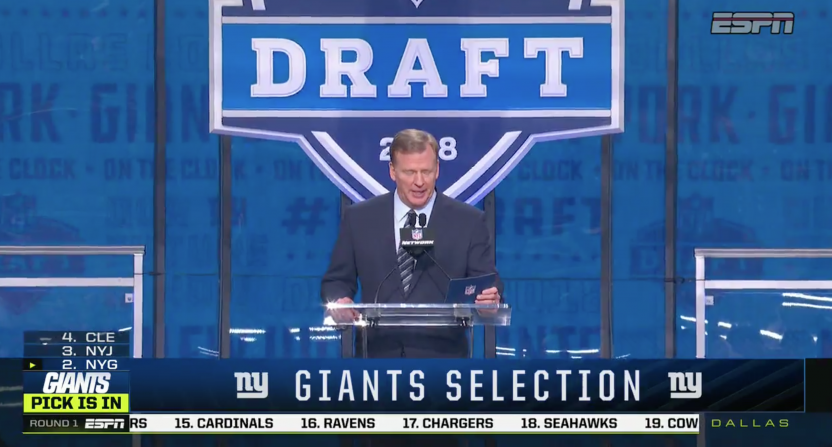 It seemed this spring as though everyone and their mothership was airing the NFL Draft. ESPN and NFL Network were set to broadcast the event as usual, while  Fox committed to simulcast NFL Network’s coverage (and lend Troy Aikman to the cause), ESPN announced it would produce an alternate telecast for ESPN2, and ABC agreed to air the ESPN broadcast of rounds 4-7.  It all seemed like a lot. Maybe too much.Well, with the draft’s first day in the books, we have a scoreboard on the inter-network battle for viewers. Per The Athletic’s Richard Deitsch, ESPN earned a 3.9 overnight rating for its coverage, while Fox pulled a 2.9, and NFL Network slid in with a 1.5.https://twitter.com/richarddeitsch/status/989877530193743872?s=19The final numbers, reported later in the day on Friday by John Ourand, also look somewhat favorable for ESPN (and more importantly for the league, the NFL as a whole).https://twitter.com/Ourand_SBJ/status/989972924084957185There are many different ways to spin this information. ESPN drew the best rating, but it was down 19 percent from last year, and its ESPN2 college-themed broadcast earned a mere 0.1. NFL Network took a bigger hit, down 21 percent, but in partnership with Fox, it succeeded in dethroning ESPN.Ultimately, however, these numbers feel like good news for ESPN, which held most of its audience even with Fox joining the draft fray. The fact ESPN beat out a network available in far more homes shows a certain brand loyalty viewers have for its coverage. Fox may eventually catch up as fans become more aware of its broadcast, but for now, ESPN remains on top.The other big winner here is the NFL. Because although over-saturation is a real problem for America’s most popular league, and although plans to eventually broadcast the draft on every major network as if it’s a presidential election sound thoroughly preposterous, this year’s first round drew a combined 8.4 rating across the four networks airing it, up 25 percent from last year’s 6.7. More networks meant more viewers, which meant more Americans obsessing over the NFL on a Thursday in April, which is the No. 1 goal of the draft to begin with.