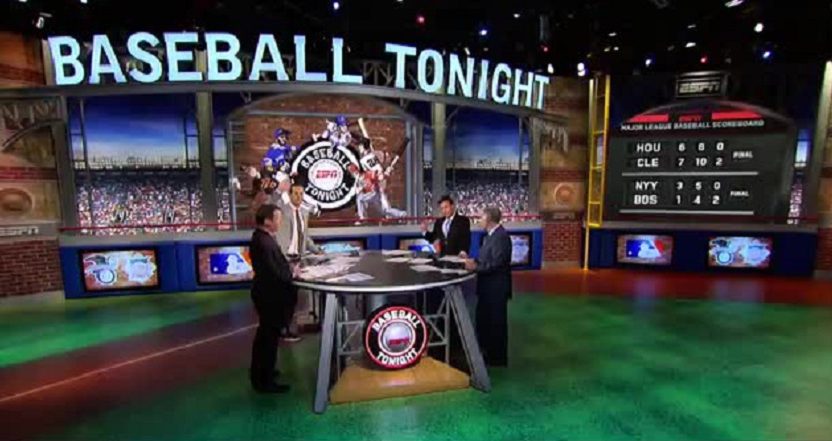 One of the surprising aspects of ESPN’s mass layoffs on Wednesday was how hard the network’s baseball coverage was hit. Longtime MLB writer and analyst Jayson Stark was among the most prominent names let go, ending a 17-year relationship.

As was the case with virtually every sport and department, writers and reporters whose work was largely seen online were deemed the most expendable in these latest layoffs. But the on-air talent that was let go on the MLB side indicated what Awful Announcing had heard for a few weeks now. Baseball Tonight, once a daily standard on ESPN (sometimes running two to three times per day), is being relegated to a weekly program airing before Sunday Night Baseball.

What we learned from sources was confirmed by Sports Illustrated‘s Richard Deitsch and eventually ESPN itself.

The show will continue. But I'd look for less editions and, obviously, less experienced staffers.

Deitsch mentioned in one of his tweets as the layoffs were taking place that there was a strong possibility ESPN would use some MLB Network programming in light of the Baseball Tonight cuts. That immediately raised eyebrows among fans and media observers. How exactly would that work? Would ESPN run a highlights show like Quick Pitch late at night that doesn’t need to be live?

ESPN quickly answered that question Thursday morning, announcing that MLB Network’s Intentional Talk would be joining the channel’s daily schedule beginning May 1. Intentional Talk will air from 4 p.m. to 5 p.m. ET on ESPN 2 — and that’s one hour before the show then airs on MLB Network, so it won’t be a rerun. (The show will run 30 minutes during baseball’s offseason.) Hosted by Chris Rose and Kevin Millar, the one difference the show might see in this new partnership is ESPN reporters and personalities making occasional appearances.

With Intentional Talk taking that 4 p.m. to 5 p.m. ET time slot, how will that affect the ESPN 2 late-afternoon schedule? Will NFL Live run for a half-hour from 3:30 p.m. to 4 p.m.? Could Jalen & Jacoby take up the full 3 o’clock hour? Would a rerun of NBA: The Jump still play in the afternoon?

How about this for an idea? Will a partnership between ESPN and MLB Network simply be restricted to Intentional Talk? Or is this a trial balloon that could open up other possibilities? Could some MLB Network talent eventually appear on ESPN? And what if that involved the announcing teams for MLB game broadcasts? That is total speculation, but with ESPN paring down its MLB talent, could it not be an option?

The bigger story is the fate of Baseball Tonight with Stark, Doug Glanville, Dallas Braden, Jim Bowden and Raul Ibanez laid off. The show was something of a standard on ESPN’s daily schedule when the network acquired the rights to televise Major League Baseball games in 1990. It almost felt like a celebration of baseball, the only show devoted solely to baseball, offering more commentary and analysis that could be fit into SportsCenter. And over the years, quite a bit of chemistry developed among the studio crew, despite various player and manager analysts rotating through while either between jobs or once careers ended.

But as ESPN acquired live rights to more sports — notably the NFL, NBA, and college football and basketball — baseball was increasingly de-emphasized on the schedule. Sometimes Baseball Tonight would air at 10 p.m. and midnight, but other nights, it wouldn’t be seen at all. Also having an obvious effect was MLB Network’s nightly MLB Tonight studio show, which looked in on every game being played and offered instant commentary and analysis. Baseball Tonight was no longer a novelty, and seemed less substantial in comparison to the multiple hours MLB Tonight could devote to baseball coverage.

Now, Baseball Tonight will only be seen once a week on ESPN, essentially a pregame show for Sunday Night Baseball that may feature highlights from action earlier in the day, but will likely be more devoted to Sunday’s game and perhaps take a wider picture view of the sport. With ESPN still featuring Wednesday Night Baseball, perhaps a Baseball Tonight-like highlights segment with a separate crew could be included on SportsCenter, like The Blitz on Sunday nights during the NFL season.

However, if you want a late-night baseball highlights fix, MLB Network is now essentially your only stop (in addition to FS1’s MLB Whiparound). As ESPN layoffs painfully demonstrated, most baseball fans were already making that their preference.