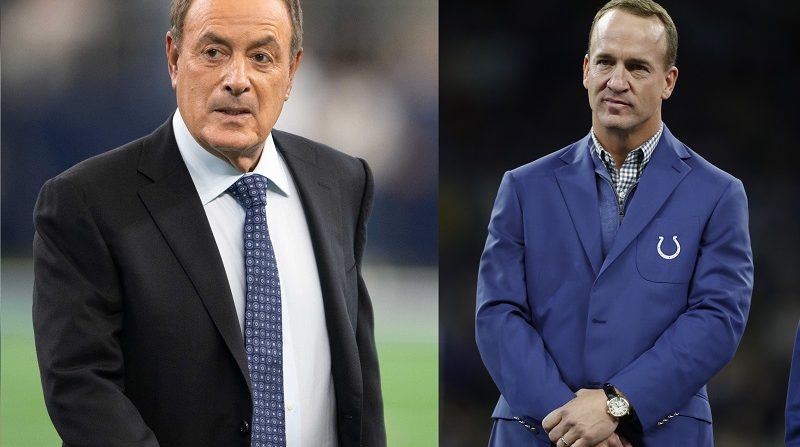 Peyton Manning retired four years ago, and networks have been chasing him for an analyst job seemingly every day of those four years, with no signs of stopping any time soon.

Shockingly, days after CBS re-signed Tony Romo, ESPN has been forced to pivot to other options in the Monday Night Football booth, and one of those options is (gasp!) Peyton Manning.

The New York Post reports that ESPN is (yet again!) targeting Manning as the new analyst for Monday Night Football, but in a new wrinkle, the tabloid is also reporting that ESPN wants to pair Manning with an unlikely play by play partner: NBC’s Al Michaels, who would need to come over in a trade, 14 years after initially being traded by ESPN to NBC.

There’s precedent for trades between the two network behemoths in recent years, too – back in 2013, ESPN was rumored to be considering trading Ryder Cup coverage to NBC for Premier League highlights. A couple months later, the deal was done, with Michelle Beadle also included, going back to ESPN from NBC. ESPN was also rumored to be considering an Ian Darke/Katie Nolan trade with Fox Sports, but ended up with both of them when all the smoke had cleared anyway.

However, there’s one tiny problem with the possibility of a Michaels trade all these years later: why in the hell would NBC do it? The obvious answer is the presence of Mike Tirico, a more than capable play by play replacement for Michaels who came over from ESPN (and Monday Night Football) in 2016. Tirico was supposed to call Thursday Night Football for NBC in 2016, but the NFL threw their weight around and pushed Michaels into the role before relenting in 2017. Tirico now serves as the host for Football Night in America (in addition to plenty of other roles at NBC). But two years ago, when the TNF rights moved to Fox from NBC, the Post reported that Fox was considering Tirico for its TNF commentary team with (drumroll) Manning. That, of course, didn’t happen, and the commentary gigs went to Joe Buck and Troy Aikman.

But aside from “hey, we have Mike Tirico!,” the reasons for NBC considering a trade are sparse, unless the NFL gives them a very hard shove. NBC shouldn’t want to improve one of its competitors broadcasts, unless they see this as an opportunity to acquire something of interest under the Disney umbrella. Would NBC want to bolster its hockey coverage with something like the Frozen Four? On paper, that may make sense, but would the five days of coverage be enough, given that NBC isn’t exactly a bastion of college hockey coverage. What about something like the Carabao Cup or FA Cup? Both would bolster NBC’s English soccer coverage, but losing them would damage ESPN+ and its soccer-heavy model, and NBC also didn’t seem too interested when the bidding for the rights to either competition came up the last time around.

Furthermore, why would Michaels want to leave NBC less than two years before the network’s Super Bowl LVI broadcast from LA’s SoFi Stadium? Last year, NBC traded Super Bowl LV rights to CBS for Super Bowl LVI rights so it could pair the 2022 game with the Winter Olympics. ESPN and/or ABC isn’t in the Super Bowl rotation, and the earliest game they could host if they force their way into the rotation in the next round of TV contracts would be Super Bowl LVIII in 2024, when Michaels would be 79.

All in all, this is quite a sticky situation with a lot of moving parts. Sure, ESPN might want to do this deal, but that doesn’t mean NBC or Michaels would have interest. And given Michaels’ age, we would probably need to have another conversation about the long-term future of MNF in the not so distant future, meaning all of this chatter would be for (yet another) a short-term fix.

As for Manning, less than a year ago he said 2019 wasn’t the right time to get into broadcasting, and that it may never be the right time. How damn long are we going to go through with this? If Manning shoots down ESPN’s advances once again this year, are we going to get another year of the Tess and Booger experiment and go through the same song and dance next year? Remember: 50 nos and a yes means yes!