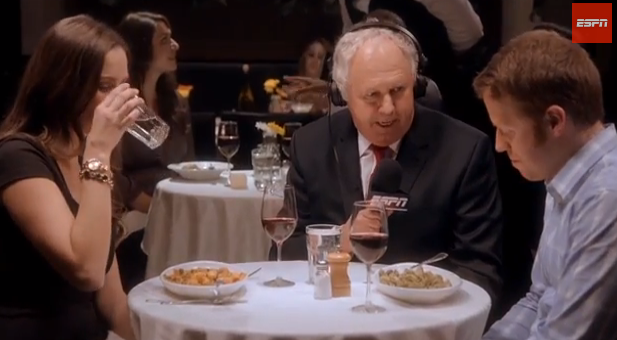 On Tuesday Ryan Glasspiegel of The Big Lead posted a very interesting report that Fox Sports 1 starlet Katie Nolan was almost traded to ESPN for Ian Darke.  Reportedly, Bill Simmons was high on Nolan for a role at Grantland, but negotiations broke down when Fox also wanted versatile reporter Marty Smith added to the deal.  While talent trades are rare in sports media, they do happen (most notably Al Michaels going to NBC from ABC/ESPN/Disney for Oswald the Lucky Rabbit, seriously, that’s a thing that happened).  Of note, Simmons had Nolan on his BS Report podcast and was unusually complimentary towards the FS1 personality and even promoted her new show* on Twitter.

PS: I think @katienolan is really talented. Would have been so much fun to work with her at Grantland. Alas. Her new FS1 show launches 3/15.

* No word on if said promotion of said Fox Sports 1 show earned Simmons another suspension at ESPN.

All that’s left for us now is to wildly speculate over what would have happened if the trade went down and who would have come out on top.  And wild speculation is what we do best!  Let’s say Fox would have agreed to take Nolan for Darke straight up and proceeded to employ the popular Brit as their lead soccer announcer and Nolan moves to Grantland and ESPN.  Who wins that trade?

What ESPN would gain

While opportunities might be limited on ESPN networks, Nolan could be a digital force at ESPN.  Her No Filter video series has been a success at Fox Sports 1 and with her unique style and cutting commentary, Grantland would be a perfect home for her.  For all their domination over the sports world, ESPN really doesn’t have a voice like Nolan that can deliver a thoughtful and viral commentary in just a few minutes.  Bill Simmons became a household name at ESPN with their unmatched reach, which is the main reason he should stay at the network when his contract expires.  And with Bristol’s audience dwarfing that of Fox on TV and online, Nolan could see her profile skyrocket.

What ESPN would lose

Honestly?  Not that much.  Darke is under contract through the 2016 European Championships.  Aside from a couple qualifiers here and there you’re not going to see much of Darke in the next year and a half on ESPN airwaves.

What Fox Sports 1 would gain

Immediate credibility with their toughest critics – soccer fans.  They’d gain the most popular soccer announcer to ever grace these shores.  They’d gain legitimacy.  And they’d finally be able to move past the failed Gus Johnson experiment and have the lead announcer they desperately need.  Soccer fans are rightfully skeptical of whether or not Fox Sports can deliver high quality coverage for a major international tournament like ESPN at the World Cup or week to week like NBC with the Premier League.  Darke’s acquisition would be a major statement of intent in the right direction.

What Fox Sports 1 would lose

Arguably the biggest breakout star of the network’s first year.  Katie Nolan has been one of the key distinguishing elements that separates FS1 from ESPN and brings something different beyond the hokey “one for fun” hashtag.  But in terms of ratings and viewership?  Crowd Goes Wild was cancelled after a year and as popular as Nolan is, it’s going to be tough to develop an audience on Sunday nights without some solid lead-in programming.

While we’re high on Nolan’s work and she’s been one of the few bright spots for FS1, the masses come to your network to watch games, not studio shows.  And the biggest weakness in Fox Sports’ rights portfolio for years has been their soccer coverage, especially in the broadcast booth.  Darke’s addition would have been answered prayers for a lot of soccer fans ahead of the 2015 Women’s World Cup and Fox’s taking of the baton from ESPN.  And between MLS, the Bundesliga, and the Champions League, Darke would be kept quite busy throughout the soccer calendar.  While both networks would clearly benefit, Fox Sports would win this deal by acquiring Ian Darke.