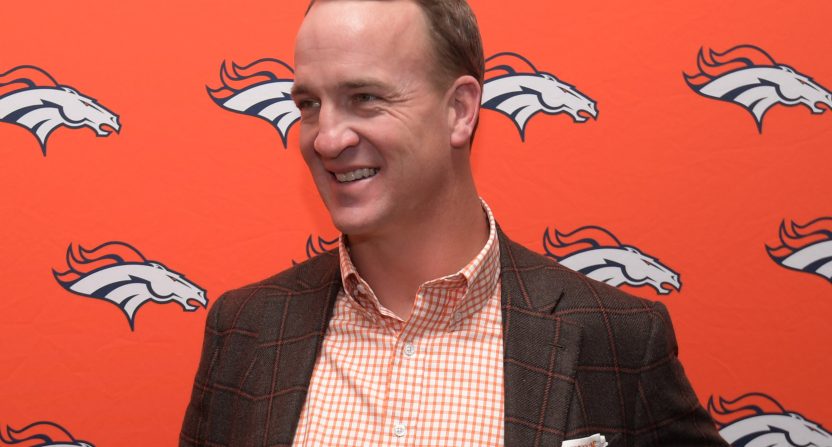 This year once again saw networks (particularly ESPN) trying to court Peyton Manning for a role on their announcing team, and Manning again declining. Despite ESPN leadership (including president Jimmy Pitaro and executive vice-president (content) Connor Schell) flying out to visit Manning in Denver in March, and despite ESPN+ partnering with Manning on both Detail and Peyton’s Places, Manning ultimately decided he didn’t want to be part of Monday Night Football this season. And his comments to Denver Post Broncos’ beat writer Ryan O’Halloran Thursday suggested a move to the broadcast booth may be far from inevitable:

"I talked to the Monday night football folks. I enjoyed talking to the them. I had great conversation. It wasn’t the right time this year. Maybe it will never be."

Those comments are particularly notable considering that from the outside, this would seem to be about as much of a “right time” as there could be. Monday Night Football is coming off a widely-criticized season, and particularly off a year where Jason Witten’s performance as their featured analyst was generally panned. Witten’s decision to leave to return to the NFL gave ESPN an opportunity to reboot that booth, and they were probably more desperate to gain an in-demand figure like Manning than they would have been before the Witten quagmire, and perhaps more desperate than they might be down the road. But Manning turned them down, so they just moved Booger McFarland from the sidelines to the booth.

Of course, there seems to be enough interest in Manning that if he does change his mind about game analysis down the road, someone will likely bite. Fox and ESPN both went after him last year, and ESPN tried again this season. And if he actually wants to do that, there will probably be takers. But this season seemed like a prime opportunity for Manning to jump into a prominent spot if he actually wanted one, and his decision to pass on that and “Maybe it will never be” comments seem to indicate he really isn’t all that interested in calling games. We’ll see if that changes down the road. But for now, you can expect to see Manning’s various other NFL projects on TV, and you’ll see him on plenty of in-game commercials, but you won’t see him actually calling a game.