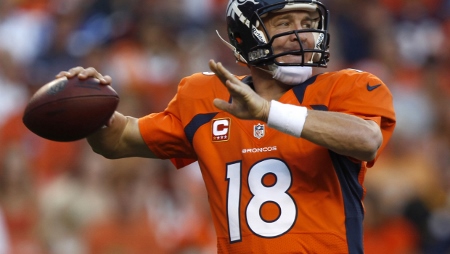 Now that Peyton Manning’s retirement has finally become official and he can ride off into the sunset together with Papa John, we can begin to speculate as to what comes next for the Sheriff.

* Before we go even farther, yes, ESPN.com actually went with the quirky Jon Gruden-inspired nickname in their headline about Manning’s retirement.  Wasn’t that just a weird Grudenism?  Or is there actually someone else on planet earth that calls Peyton Manning “the Sheriff?”

Anyways, the speculation has long been that Manning could do whatever he wants in his post-NFL career.  He could buy a stake in ownership somewhere, step into a general manager’s position, coach, or become the next Billy Mays.  A popular thought, though, has been that Manning would be a natural for televised football analysis and that the networks would all get into a bidding war for his services.

One of those networks made their first public overture to Manning on Sunday as ESPN spokesman Josh Krulewitz politely said that Bristol was “open to exploring that possibility” in acquiring the services of the future Hall of Famer.  Here’s those comments via The Sporting News:

“If he decides to pursue a career as a commentator, we would certainly be open to exploring that possibility with him,” said Krulewitz.

If he does become a TV analyst, I can see Manning easily fitting with Chris Berman and the crew on ESPN’s “Sunday NFL Countdown” or “Monday Countdown.”

The former GM who drafted Manning for the Indianapolis Colts, Bill Polian, is already an ESPN analyst. Ditto for Jeff Saturday, Manning’s former center with the Colts.

Would ESPN dump Jon Gruden on “Monday Night Football” in favor of a Manning-Mike Tirico team, or create a three-person MNF booth with Manning, Gruden and Tirico?

“That’s way way ahead of things,” said Krulewitz. “First he would have to decide if he wants to be a commentator. Then any conversation would ensue.”

ESPN might be open to exploring possibilities but let’s take a step back and examine whether or not that’s the best fit for either side.  With all the budget cuts ESPN has been making and the 10,000 NFL analysts already at their disposal, doesn’t Manning’s impact get muted somewhat, especially considering how much he’d demand in salary?  That is unless you stick him in the Monday Night Football booth with Jon Gruden… but just ask Ron Jaworski how that worked out for him.  Considering Gruden is already reportedly the highest-paid on-air talent at ESPN, the amount of money invested in just those two guys would be enormous for a cash-conscious ESPN.

ESPN is interested in Manning because this is what they do.  They go out and hire the biggest names in the newly retired class of NFL players, whether they’ll actually be good on TV or not (Emmitt Smith, Ray Lewis, now Charles Woodson) and then figure it out as they go along.  But pretty much every other network that televises professional football will similarly be interested in hiring Manning, and some of those other competitors may actually be a better fit too.