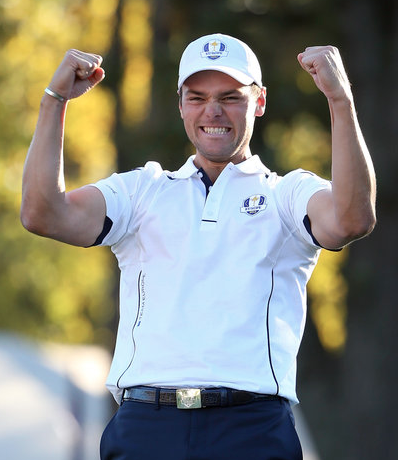 Trades are something that happen very rarely in the sports media world as networks compete with one another for sports rights.  We've seen some networks team up on certain packages to lock out another competitor (think ESPN and Fox joining forces to keep NBC out of the Pac 12) but rarely do we see the kind of wheeling and dealing that often makes things interesting.

One of those rare deals is reportedly happening very soon as Geoff Shackleford reports ESPN is trading Day 1 of next year's Ryder Cup to NBC for increased access to English Premier League highlights.

As with all the best trades in sports, the deal makes sense for both sides.

For ESPN, it gives them access to EPL highlights for shows like SportsCenter and ESPN FC.  Although ESPN hasn't been able to make a significant step towars major soccer rights since losing the World Cup to Fox, this is another sign their investment in the sport remains as strong as ever.  Expect to see much more of the EPL on SportsCenter thanks to this trade as the league continues to grow its footprint on this side of the Atlantic.  For NBC, it actually might help bring eyeballs to their coverage thanks to the added publicity on SportsCenter.

As far as the golf side of the equation is concerned, ESPN hasn't shown much interest in golf aside from Tiger Woods and the majors in recent years, so losing one day of Ryder Cup rights isn't a huge deal for them.  For NBC, it opens up the possibiilty of televising every day of the tournament on their broadcast network or perhaps showing Day 1 on Golf Channel, which would be a boon for that network.  Either way, it gives them total exclusivity for the event, which is something the peacock has been fond of having for their sports in recent years.

And for the record, it's not the first time ESPN and NBC have made a trade.  ESPN once traded Al Michaels to NBC for Ryder Cup rights, Olympic highlights, and a cartoon rabbit not named Bugs Bunny in 2006.

I wish we would see this more often amongst sports networks.  Just imagine the possibilities…