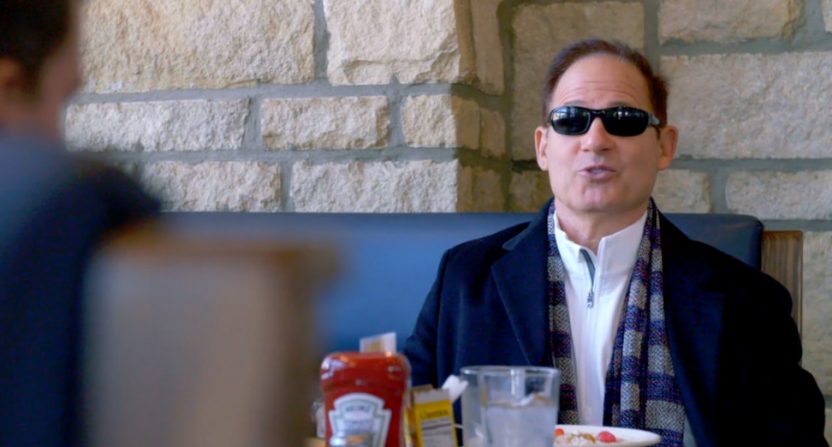 One of the more interesting things going on at Big 12 Media Days in Arlington, Texas this week (well, aside from the Longhorn Network’s social media activity) is the revelation of further details about the conference’s new third-tier streaming deal with ESPN+, which was announced in April. Big 12 commissioner Bob Bowlsby said Monday the streaming content there will be branded “Big 12 Now” and that it will include over 800 exclusive games a year. And Tuesday saw an even more interesting announcement of an 18-part behind-the-scenes series on Les Miles and Kansas that will premiere on the service next month, with a trailer that includes footage of Miles and Kansas athletic director Jeff Long talking before Miles officially took the job (and a clip of Miles accepting Long’s offer):

That’s a remarkable trailer, and it’s amazing that both Long and Miles allowed that kind of access during coaching negotiations. Maybe they agreed with promises that the footage wouldn’t be used for quite a while, but still, it’s extremely rare to get that kind of behind-the-scenes look at a coaching search. And that hire happened in November, long before April’s deal to create what’s now Big 12 Now, so this footage can’t originally have been intended for that specific platform. But Big 12 Now looks like a great fit for it, and it’s interesting that this is going to be built into an 18-part all-access series that also covers the Jayhawks’ spring game, training camp, and season this fall. The series is produced by JM Associates and Sport & Story, and it will premiere on ESPN+ in August. Here’s more on it from ESPN’s release:

Premiering exclusively on Big 12 Now on ESPN+ next month, a new 18-part series will give fans a comprehensive, behind-the-scenes look at Kansas Head Coach Les Miles and Athletic Director Jeff Long as they seek to raise the Kansas football program to national prominence. The series will include four preseason episodes in August, followed by weekly installments during the college football season. Filming began this offseason, before Miles was hired, and will cover the entire 2019 season from start to finish. A trailer for the series is available here.

In recent years the Jayhawks football program has struggled, averaging just two wins per season over the last 10 years. As Miles and Long work to improve the Kansas football fortunes, the show, produced by JM Associates and Sport & Story, will provide access to every decision and step along the way, from fundraising, contract negotiations, building the coaching staff, preparing the players and more.

“Jayhawks fans have waited far too long for a football team that is on the same level of success as the other athletic programs at the University of Kansas,” said Miles. “I’d like to thank Jeff Long for believing that I am the coach that can turn this team around. Having cameras behind-the-scenes all season is not something I am used to, but I look forward to sharing our journey on ESPN+ and my hope is that people can appreciate all the work that goes into building a contender.”

Benton Smith of the Lawrence Journal-World has some further details:

The first four episodes will debut in August, during preseason camp, and 14 more will follow throughout the season. An ESPN spokesperson said the episodes will last approximately 18 to 20 minutes, generally, but the first four installments may be a bit longer.

Before the material can feature game footage and in-season preparations, some of the episodes will show how KU went about hiring Miles, as well as how he got acclimated to his new job after spending more than two years away from the coaching profession, once LSU fired him four games into the 2016 season.

This seems like a solid initial series for Big 12 Now. There’s been a fair bit of interest in all-access college football series in the past, from Showtime’s A Season With (which put out seasons covering Notre Dame, Florida State, and Navy) to an ESPN+ one on Alabama (during camp only, though), and the all-access format in general has really taken off lately. Also, Miles at Kansas is the sort of thing that has appeal beyond just Jayhawks’ fans, as there’s a compelling story of trying to turn around a struggling program and a fascinating character in Miles (who did everything from acting to commercials to podcasts to game analysis and panel punditry between his exit from LSU and his hire at Kansas). And Kansas is a smart program to focus on here, as the Jayhawks’ Week 2 game against Coastal Carolina will be exclusively on ESPN+; that means there will probably be some Kansas fans signing up for the service for that, and now they have some shoulder programming focused on their school to check out as well, which might help convince them to stick around.

As per Big 12 Now in general, it’s interesting to see Bowlsby mention 800+ games. That’s presumably the total in 2020 when Iowa State, TCU, Texas Tech, and West Virginia join Big 12 Now; Baylor, Kansas, Kansas State, and Oklahoma State are the only schools in this year, and each involved school is expected to provide over 50 exclusive home events each year. (Texas and Oklahoma are not involved in this as home teams thanks to their existing third-tier deals with ESPN/Longhorn Network and Fox Sports regional networks/Sooner Sports TV., but they’ll still be on Big 12 Now for some games where they’re the road teams.) But yes, once those eight schools are all in, there will be a lot of content on this platform.

And the Miles/Kansas documentary series suggests the Big 12 is looking to do a bunch of shoulder programming there as well. Big 12 Now is not a linear conference network, but that may actually work in its favor in some respects; rather than having to spend budget programming whole days, they can perhaps put more money into a smaller number of high-quality series that will be available on demand. We’ll see how this series turns out, but it’s certainly got some intriguing elements. And it could be an indication of further similar projects to come on Big 12 Now.