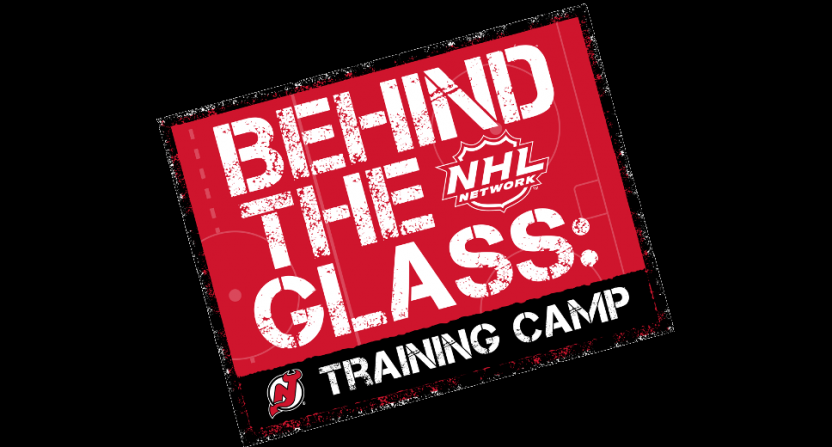 There have been plenty of all-access documentary series out there, and even some all-access hockey documentary series (particularly with the various ones leading up to the Winter Classic over the years), but one showing off the challenges of making a team in training camp (a formula that’s worked so well for HBO’s Hard Knocks on the NFL) is new. And NHL Network will be doing just that this fall, delivering a Behind The Glass: New Jersey Devils Training Camp in partnership with the Devils. The series debuts Wednesday, Sept. 26, and a trailer can be seen here:

The National Hockey League (NHL®), NHL Network™ and the New Jersey Devils® today announced the launch of a new four-part, all-access series titled Behind The Glass: New Jersey Devils Training Camp, premiering Wednesday, Sept. 26 at 7:00 p.m. ET on NHL Network. Making the first series of its kind focused on the NHL preseason, each 30-minute episode of Behind The Glass will offer fans an unprecedented look inside the NHL preseason through the lens of the Devils, who are coming into the 2018-19 NHL regular season following their first Stanley Cup Playoff appearance in six years.

…“Behind The Glass will give hockey fans a never-before-seen look at the demanding process of building and making an NHL team during the preseason,” said NHL Chief Content Officer and Executive Vice President Steve Mayer. “We’re excited to partner with the Devils and NHL Network on this all-new series that will uncover compelling stories, on and off the ice, and take fans places that cameras have rarely been allowed. We can’t wait for our fans to be in the room when final roster decisions are being made.”

“This will be a great opportunity for our fans, and hockey fans throughout the world, to get an exclusive inside look into who the New Jersey Devils are,” said New Jersey Devils and Prudential Center President Hugh Weber. “The entire organization is proud and excited to be involved in the series. It will allow viewers to witness another example of the culture and message that Ray Shero, John Hynes and our staff have been building for the past few years.”

The series is produced by NHL Network in association with NHL Original Productions, and it will not only showcase the over 50 players vying for 23 roster spots, it will also have plenty of content on notable veterans, including Taylor Hall (the reigning Hart Memorial Trophy winner as NHL MVP following a 39-goal, 54-assist season) and Brian Boyle (the reigning Bill Masterton Memorial Trophy winner for his inspiration comeback from leukemia). And the Devils are making a preseason/start of the season trip to Europe, which will see center Nico Hischier (the first overall NHL draft pick in 2017) return to his native Switzerland for an exhibition game against SC Bern and forwards Jesper Bratt and Marcus Johansson return to their native Sweden for the Devils’ Oct. 6 regular-season opener against the Edmonton Oilers. The cameras will be there to cover all of that.

The series kicks off on Wednesday, Sept. 26 with the first episode at 7 p.m. Eastern. Episode two premieres Monday, Oct. 1 at 7:30 p.m. Eastern. Episodes three and four follow on the next two Mondays, Oct. 8 and 15, both at 7:30 p.m. Eastern. We’ll see how this turns out for the Devils and NHL Network, but it’s certainly a notable project, and it’s focused on an interesting team; the Europe trip in particular might help this stand out. This might be worth keeping an eye on for Devils’ fans in particular, but also for hockey fans in general. And if it goes well, maybe we’ll see future training camp-focused Behind The Glass installments for other teams.