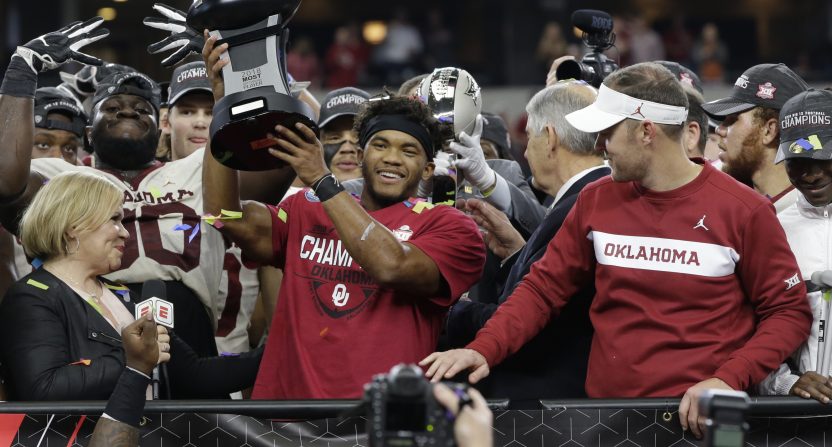 ESPN and the Big 12 have agreed to a new rights deal that will see ESPN and ABC carry three more football championship games through 2023, along with adding plenty of college basketball inventory to ESPN+.

The deal was reported by John Ourand and Michael Smith at Sports Business Daily:

ESPN signed a sweeping media-rights deal with the Big 12 that will see ABC or ESPN carry every football championship game through ’24 and will launch a Big 12-branded area on ESPN+. In the new deal, which includes three championship games and ESPN+ rights, ESPN will pay a total of around $40M. When this agreement is added to the current media-rights deal that still has six years to run, the conference will average $22M per year, sources said. A formal announcement is expected later today.

As part of the deal, ESPN picked up the rights to three football championship games in ’19, ’21 and ’23 that Fox had declined to buy. The conference had been trying to find a media company to pay in the high teens for those games. It will appear on either ABC or ESPN depending on scheduling.

The SBD report also mentions that adding college basketball inventory to ESPN+ is a big part of the deal:

Eight of the 10 schools will provide more than 50 exclusive events per year, including at least one football game, any spring football game and any basketball game that is not on an ESPN linear network. Texas, which has Longhorn Network, and Oklahoma, which has its own local rights deal, will not provide content to ESPN+. However, both schools will be featured on the streaming service when they are an away team and during conference championships outside of football and basketball.

That element of the agreement begins rolling out next year, as Baylor, Kansas, Kansas State, and Oklahoma State will all have games on ESPN+. It’s not yet clear whether this agreement will preempt the existing local distribution in place, or whether ESPN+ will be simulcasting those existing broadcasts, but either way it’s more live sports content on ESPN+.

ESPN confirmed the agreement in a release:

Under the expanded agreement, hundreds of additional Big 12 sports events annually will be presented under the new Big 12-branded offering on ESPN+, with each participating Big 12 Conference school assigning available rights to ESPN and delivering more than 50 exclusive events per year. The lineup will include:

The way this is being described sounds a bit like ESPN+ is going to serve as the de facto Big 12 conference network, which is an arrangement that makes sense. The Longhorn Network still stands in the way of the conference agreeing to a more traditional rights distribution, while ESPN gets to add a lot of inventory to ESPN+, and the kind of property that has the potential to draw lasting subscribers.

It’s also a likely blueprint for ESPN rights deals going forward. The bet on ESPN+ means just about any new property added is going to have some kind of ESPN+ tie-in, so we could see more of these in the near future as various conference rights deals come up for renewal.