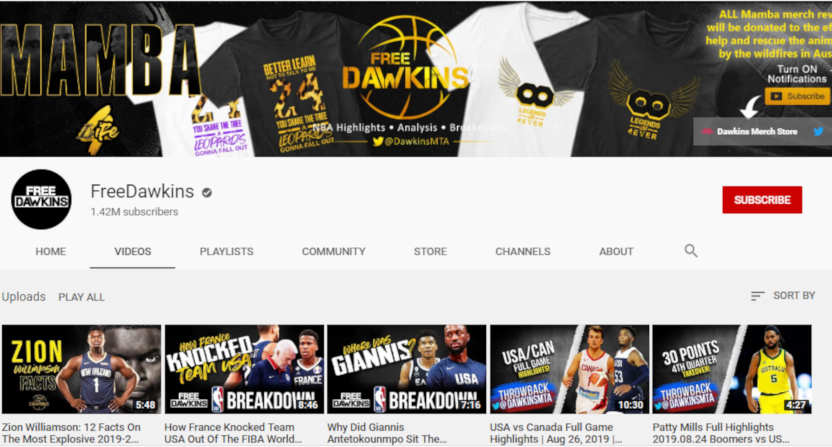 One of the most popular YouTube channels for NBA highlights and clips is FreeDawkins, which has been on YouTube since January 2015 and has 1.42 million subscribers for the main channel (plus 244,000 for VintageDawkins, focused on older clips, and 53,600 for SQUADawkins). This week saw all NBA content disappear from those channels’ public pages, with the main FreeDawkins channel now showing just seven videos from the 2019 FIBA World Cup, one video from a 2003 high school dunk contest, and one video of “12 facts on Zion Williamson.” (Many of the old videos appear to still be there in playlists, just set to private, but only the seven are accessible by the public.)

The disappearance of FreeDawkins’ NBA content has led to a lot of discussion on Reddit and other social media platforms, with a lot of people bashing the NBA and saying this seems inconsistent with commissioner Adam Silver’s comments at the 2015 MIT Sloan Sports Analytics Conference. There, Silver said the league tends not to go after unauthorized channels focused on NBA highlights, saying “for the most part, highlights are marketing.” And if that approach had indeed changed, that would be significant.

But an NBA source told Awful Announcing that they’re not involved with the FreeDawkins takedown in any way, and that the NBA’s overall approach to unauthorized highlights channels hasn’t changed since Silver’s 2015 comments. Here are those comments that Silver made in February 2015, via a Sports Illustrated article from Matt Dollinger (they’re at point #30):

​30. Why doesn’t the NBA crack down on people ripping highlights and putting them on YouTube? NBA commissioner Adam Silver explained: “Highlights are marketing.” Stealing highlights isn’t anything new. Silver said long before the NBA was in business with ESPN, SportsCenter used to steal its highlights all the time under news access rules and the interpretation of the first amendment.

“We’re incredibly protective of our live game rights, but for the most part highlights are marketing,” Silver said.

The commissioner said he would love for Twitter users to one day be able to click a button and purchase a game if they feel compelled after seeing a highlight.

Due to cable restrictions, the only way to purchase NBA games is by buying the right to watch an entire season through League Pass. But Silver envisions a setup where fans can buy games individually.

“Most people don’t want to consume that many games,” Silver explained.

That latter discussion of letting fans buy individual games (and also single-team streaming packages) became reality in June 2015, just a few months after Silver’s comments. And the NBA has since gone even further, announcing in September 2018 that they’d sell partial game options (including just the fourth quarter for $1.99) and announcing in March 2019 that they’d sell the final 10 minutes of games for 99 cents. So the idea of Twitter highlights producing actual immediate revenue for them is more of a reality now than it was when Silver made those 2015 remarks. And while after-the-fact YouTube highlights like the ones from FreeDawkins aren’t going to have people buy the games in question, the “Highlights are marketing” line from Silver still holds up; for example, if viewers watch a “Zach LaVine All-Time Game Highlights” playlist, maybe they opt to purchase some future game (or portion of a game) involving LaVine that they wouldn’t buy otherwise.

As SI’s Luke Winkie wrote in a 2016 piece on channels like FreeDawkins, “It seems like the NBA could shutter all these channels pretty easily if they wanted. Their case is ironclad; people outside the Association using its telecasts for profit is strictly prohibited, that’s not exactly in the fine print.” (That piece mentions that a 2016 SocialBlade estimate of earnings from the main FreeDawkins channel was something between $69,000 and $1.1 million a year, so there’s definitely profit to be had.)  If the NBA had changed their policies on people using their highlights, that would explain why all the NBA clips went away. But the above NBA source comments that they haven’t changed their policies and weren’t involved with the FreeDawkins videos going away suggest that takedown comes from another source.

It’s unclear what that other source is. Some past copyright takedowns have come from leagues, such as the English Premier League’s in 2014 (which saw Bleacher Report’s UK Twitter account suspended) and the NFL’s in 2015 (which saw the Deadspin and SBNationGIF Twitter accounts briefly suspended). The 2015 suspensions of those accounts were interesting, as the DMCA takedown notices showed; the NFL (through third-party firm NetResult Solutions) complained about specific clips, but didn’t request account suspension or termination, while the UFC asked for account termination of @Deadspin over a GIF of a Ronda Rousey fight,  and another third party, XOS Digital, went after @SBNationGIF on behalf of the Big 12 and the SEC.

The IOC also managed to get people banned from Twitter in 2016 over complaints around GIFs of Olympic highlights. There have also been plenty of suspensions originating from complaints by music rightsholders over copyrighted music in videos, which appears to be what’s behind suspensions of a lot of official college team Twitter accounts over the years. One of the most bizarre suspensions came in 2019, when NBC Premier League analyst Kyle Martino received a brief ban from Twitter for…posting video from NBC’s Fan Fest, an event hosted by the network he works for, which had the U.S. rights to the event in question.

So there have been lots of copyright-related takedowns over the years originating from numerous sources, and it’s not clear what’s behind this one. (If it is in fact a copyright takedown; that would seem to be the most likely thing here, but it’s not the only explanation.) But it’s interesting that the NBA is saying they didn’t have anything to do with this. For now, FreeDawkins is still posting NBA videos to Facebook; we’ll see if the YouTube content eventually returns, or if it’s gone for good.