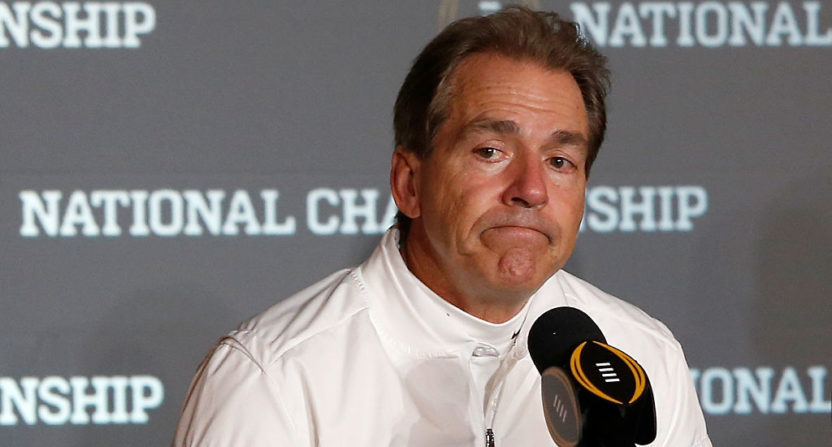 There are plenty of Twitter suspensions handed out, often for copyright claims, and those have previously hit college programs like Georgia (on the day of their spring game this year, no less), Missouri, Texas and South Florida, often thanks to the usage of copyrighted music in videos. Well, now the copyright takedown police apparently want Bama. The Alabama football team’s official Twitter account was briefly suspended Thursday (it’s back now), during SEC Media Days no less. And as expected, Twitter had plenty to say about that:

Guessing this will be handled “internally.”

@BamaFan135 see what happens when you let butch touch stuff?

That last one, a shot at former Tennesse head coach and current Alabama offensive analyst Butch Jones, is particularly funny. But Jones didn’t have anything to do with this (that we know of, at least). Michael Casagrande of AL.com writes that it’s again about a Digital Millennium Copyright Act claim over music, and that this is the fourth strike for the account this year (it was apparently previously suspended on April 10):

A remixed song used in a video posted by the account was pinged as a copyright violation that led to the Twitter timeout.

It was the fourth copyright strike against @AlabamaFTBL in 2018 after receiving two last year, according to the Lumen Database that tracks DMCA notices. The one filed Thursday did not list the copyright holder. The one allegedly offending Alabama football tweet was among 293 included in the complaint to Twitter that resulted in the suspension.

The now-deleted tweet in question was posted June 27 with a video of players working out.

As mentioned above, this is becoming pretty common for college football accounts. And it’s likely to keep happening from time to time, unless those accounts become a lot more careful with the music they use. And unlike, say, fights with LeBron James over the concept of a barbershop series, it’s a little harder to appeal this. But at least it’s a good opportunity to crack jokes about the program in question. Like, for example, this Lynyrd Skynyrd rewrite:

Well, I heard DMCA talk about us

I heard DMCA take us down

I hope DMCA will remember

Southern fans don’t need it around.

For the moment, though, DMCA takedowns are one opponent Nick Saban and the Tide can’t overcome.