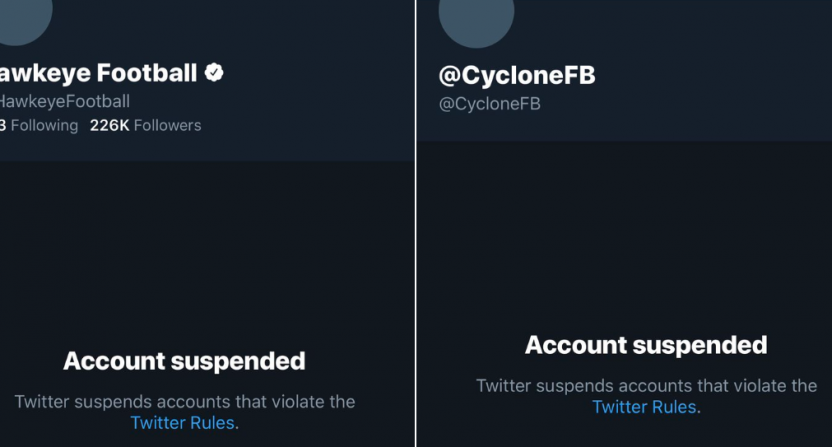 As of now, Twitter accounts for the University of Iowa and Iowa State University football programs are still suspended. They have been since at least Saturday morning, as well.

Now this is strange. Both Iowa and Iowa State’s official football Twitter accounts (@HawkeyeFootball and @CycloneFB) have been suspended.
No other Big Ten or Big 12 schools affected. pic.twitter.com/YyUBLruu6d

Tommy Birch of the Des Moines Register wrote about the issues on Saturday, including a statement from a University of Iowa spokesperson, who said the Iowa account was suspended for copyright infringement related to music in videos the account tweeted out in 2018.

A message read that “Twitter suspends accounts that violate the Twitter rules” when both were attempted to be viewed Saturday.

So, what’s up? Iowa spokesperson Steve Roe said in an email to The Register Saturday that the Hawkeyes had two accounts suspended: football and women’s gymnastics.

“Two University of Iowa Athletics Department official twitter accounts have been suspended due to music copyright infringement in a limited number of posts in 2018,” Roe wrote. “We are in the process of working with Twitter to resolve the issues and to ensure future posts are in compliance, and as a result, one of the accounts has been reactivated. We appreciate everyone’s patience and support of the UI Athletics Department social media accounts.”

Iowa State spokesperson Mike Green said the school was “currently looking into the matter with Twitter.”

Iowa’s gymnastics account is up and running now, though, meaning only the rival football programs are affected. It’s odd that only the Iowa programs would suspended as well, but here we are. This feels like an issue that will get ironed out soon enough, though.