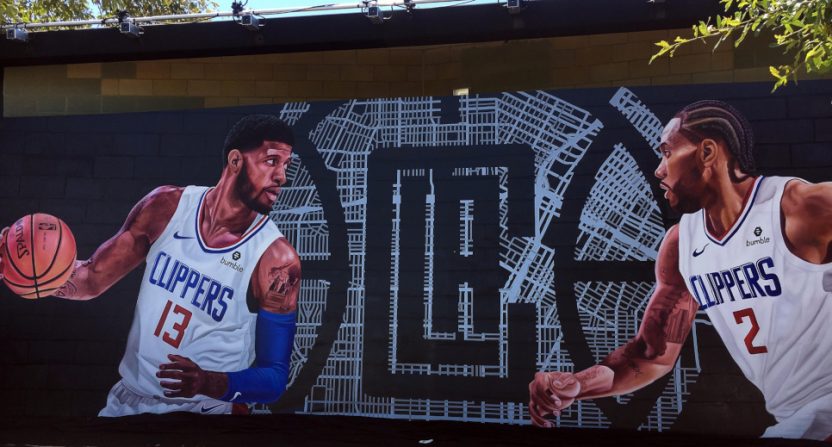 It’s the dawn of a new day in the NBA heading into the 2019-2020 season, as the league is maybe more wide open than it has been since the dawn of the superteam. This year, the sheer number of unprecdented superstar moves appears to have brought some deeper competitive balance to the league. Instead of just three to five teams thinking they have a legitimate shot at a title, there are upwards of a dozen teams (Lakers, Clippers, Warriors, Rockets, Bucks, 76ers, Celtics, Blazers, Nuggets, Jazz, Nuggets, Nets) or more that will consider themselves contenders.

That means that it should be the most exciting and intriguing regular season we’ve seen in some time. And with the national television schedule released on Monday for ABC, ESPN and TNT, we’re here to make sense of it all for you to be prepared ahead of the upcoming season.

1) Pour one out for the Knicks

With all that out of the way, let’s start with a non-contender – the New York Knicks. It was just a few years ago that NBA fans were relegated to suffering through over 20 Knicks games on national television throughout the course of the regular season. However, four consecutive 50-loss seasons and the inability once again to sign a marquee free agent have led the Knicks to the bottom of the association. The Knicks even struck out in the lottery in their hopes of getting Zion Williamson and had to settle for Duke teammate R.J. Barrett.

This year the Knicks have a paltry three nationally televised games. That’s right, three. They’re in the same neighborhood as the Hawks, Hornets, Cavaliers, Pistons, Grizzlies, Suns, and Wizards in that department, and they won’t be adding to their league-high number of Christmas Day games. It’s a shock to see the NBA’s biggest team in its biggest market being a complete afterthought, but that’s what James Dolan’s visionary leadership will get you. (That, and fights with media outlets.) At least Knicks fans will be able to sell themselves on Giannis Antetokounmpo’s free agency in 2021!

2) The center of the NBA universe is California

There are a lot of teams who might consider themselves favorites for the upcoming season, but it’s clear who the networks are putting the most faith in to carry interest throughout the year. The Lakers, Clippers, and Warriors will all see at least 26 games on ABC, ESPN, and TNT throughout the season. When you include NBA TV, the three clubs will see nearly half of their games played on national television with the Lakers actually exceeding the 50% mark.

National TV breakdown for all 30 teams. (ABC included this time, apologies.) Lakers have the most, Cavs and Hornets the least. pic.twitter.com/7yA3Ku5RpP

The Battle of Los Angeles also gets two prime slots on the calendar on Opening Night and the primetime slot on Christmas Day. It’s no surprise that the Lakers and Clippers would be the focus of the national television schedule, with Anthony Davis teaming up with LeBron James for the purple and gold and Kawhi Leonard leaving the NBA champion Raptors to buddy up with Paul George for the Clips. (A mural at L.A.’s Green Meadows Recreation Center celebrating that is seen at top.) In fact, all four Lakers-Clippers matchups are slated for national television, with two on ABC, one on ESPN, and one on TNT.

And while the Warriors may actually not make the Finals for the first time in five years, they’ll still have a championship nucleus of Steph Curry, Klay Thompson, and Draymond Green, plus the addition of D’Angelo Russell. Regardless of how the playoffs go for them, they’ll be a major attraction throughout the season.

Although Kevin Durant moved from the Warriors to the Nets, the balance of power remains in the NBA’s Western Conference as it has for much of this millennium. Six of the top eight teams in the Las Vegas odds to win the NBA title are in the Western Conference, with only the Bucks and Sixers breaking the west’s domination. Even beyond the top teams out west, there are still others that will be very successful (Portland), entertaining (Sacramento), or featuring the game’s top young stars (New Orleans).

However, having the top teams out west isn’t great for the league’s television partners, especially as many Western Conference games in nationally-televised doubleheaders have often tipped off at 10:30 PM ET. By the time those games start the second half, two-thirds of America has long been in bed. This year, the NBA is moving up many doubleheader times for both ESPN and TNT, with an obvious eye to showcasing the top teams out west in timeslots that are friendlier to those in the East (but more challenging for some western fans).

Lakers-Pelicans (Nov 27), Rockets-Thunder (Jan 9), Blazers-Rockets (Jan 13), and Clippers-Lakers (Jan 28) are just a few of the games that will tip off an hour or half hour earlier than normal to give east coast basketball fans a chance to watch some great basketball while passing out on the couch. And that should perhaps help with the ratings, which fell five percent for national broadcasts (and four percent for local broadcasts) last year.

No team saw their national profile increase this offseason like the New Orleans Pelicans. Not only did they finally finalize a trade with the Lakers for Anthony Davis that got them an insane haul of young talent and draft picks, but they also landed Zion Williamson, the most influential rookie to enter the league since LeBron James. Think that’s an overstatement? Check out ESPN’s college basketball ratings last year anytime Zion was on the floor.

The Pelicans may not be a playoff team right away, but much like LeBron’s rookie season in Cleveland, Zion will be on television a lot. The Pelicans have 20 games on ABC, ESPN, and TNT this season including marquee slots on Opening Night, Christmas Day, and two ABC Saturday night games.

With the amount of player movement happening this offseason, the networks are taking advantage of the high number of player return games we’ll see this season. Among those games that you may want to circle on your calendars…

Unfortunately, the biggest offseason move probably won’t be commemorated in the same way. Nets-Warriors could also be added to the list if we were going to see a healthy Kevin Durant, but that seems unlikely at this point.

Still, with this many must-see games throughout the 2019-2020 season, this should be one of the best NBA seasons in recent memory. The regular season may not mean a lot to casual fans, but it’s hard to envision a scenario where the NBA doesn’t see some positive ratings news for 2019-20.