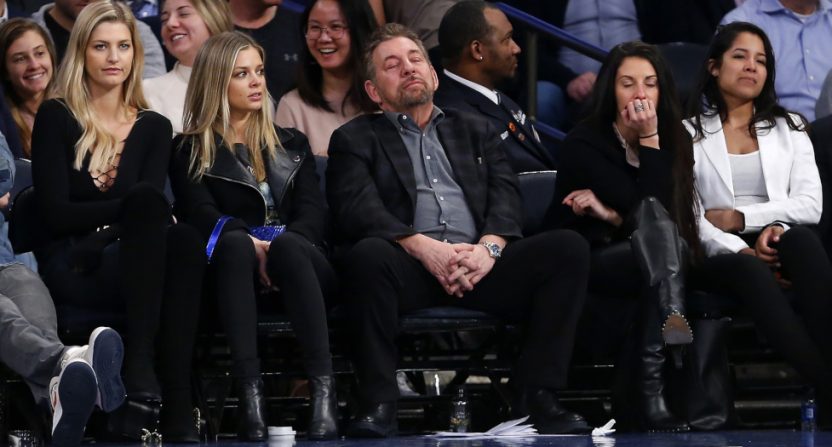 The long fight between the New York Knicks and the New York Daily News has reached some resolution thanks to NBA intervention. The Knicks have long been upset with the paper, complaining about what they see as negative coverage, and they’ve kept them out of some media events as a result. That included a press conference with team president Steve Mills in December and a few incidents since then (including a March conference call and press conference), and it really blew up into the spotlight Friday after the team invited everyone else who covers them to a press conference with their new draft picks (R.J. Barrett and Ignas Brazdeikis) but kept the Daily News out.

That led to high-profile public criticism for the Knicks and owner Jim Dolan (seen above looking nonplussed courtside during a March game) from prominent media figures such as Marc Stein, Howard Beck, and Chris Mannix, as well as from the Pro Basketball Writers’ Association, and it’s now led to the NBA fining the Knicks and forcing them to comply with media access rules moving forward:

The NBA announced today that the New York Knicks have been fined $50,000 for violating the NBA’s rules regarding equal access for media.

The Knicks did not allow the New York Daily News access to their post-draft press conference on Friday, June 21 while allowing all other credentialed media who cover the team to attend.

The organization has agreed to comply with NBA Media Access Rules moving forward.

It’s not especially clear why this incident triggered NBA intervention and previous ones didn’t, especially as the December and March situations also appeared to have the Daily News as the only outlet not invited. But perhaps the Knicks were able to argue that there were some other credentialed media outlets they didn’t invite those times, or perhaps there are different restrictions around those events (such as December’s interview with the team president, which wasn’t specifically tied to a news event) as compared to the first official press conference with new draft picks. Or perhaps the Knicks’ previous moves didn’t create enough controversy to come to the attention of the league office. At any rate, the league’s now stepped in, and it’s notable that this isn’t just a fine, but also an agreement that the Knicks will follow those access rules going forwards.

Update: Here’s a statement from the Knicks:

The Knicks acknowledge that we did not comply with the NBA’s media policy, and made an error in interpreting Friday’s announcement as an invite only event.  As we do throughout the year, we have and will continue to provide access to credentialed media as per the League’s policy.

This situation will be interesting to keep an eye on, as there’s quite the past of the Knicks fighting with the media. Beyond run-ins with the Daily News, Dolan claimed in March (in relation to banning the Daily News and Knicks’ writer Stefan Bondy in particular) that “certain journalists actually wish ill will toward the team,”  and he accused Ringer founder Bill Simmons of “trying to destabilize” the franchise. Dolan also went to war with WFAN and parent company Entercom last fall over comments from WFAN’s Maggie Gray, pulling all ads from their airwaves, and he called Fox executive chairman Rupert Murdoch directly in October 2017 to complain about a FS1 subway ad campaign criticizing the Knicks (Fox eventually pulled the ads).

None of those issues are directly related to access, but they help illustrate the degree to which Dolan and the Knicks care about media reports. ESPN’s Ian O’Connor wrote last December that “Media paranoia is an indisputable part of the building’s playbook,” and that the Knicks keep clip-file dossiers on those who cover them. And that sort of approach means this may well not be the last media access controversy involving that team.

There’s a long history of sports organizations trying to ban reporters or outlets who they feel are too negative or who report things they don’t like, but it usually doesn’t end well for the organization. Dana White and the UFC found that out with their 2016 ban of Ariel Helwani (and their subsequent reversal), and Bradley University wound up in a giant controversy ahead of March Madness this year for short-lived restrictions on local reporter Dave Reynolds’ access. And there have been plenty of other attempts to curtail access for specific reporters or outlets over the years, with most eventually reversed.

But those reversals usually only come after a storm of negative publicity, such as what happened here. Teams would probably be smarter to try and not pull these moves in the first place, but there are always organizations that want to try and influence how the media cover them. It doesn’t really work, though, as outlets are often quite capable of covering a team well without in-person access (and that coverage really doesn’t make the team look better). But it’s still important for outside journalists and journalistic organizations like the PBWA to follow these attempts to restrict access, and to raise hell when teams try to restrict someone’s access. In this case, and in many other cases, that outcry appears crucial to actually getting a result, and to preserving journalistic access going forward. Now we’ll just see if the Knicks do actually play by the rules.