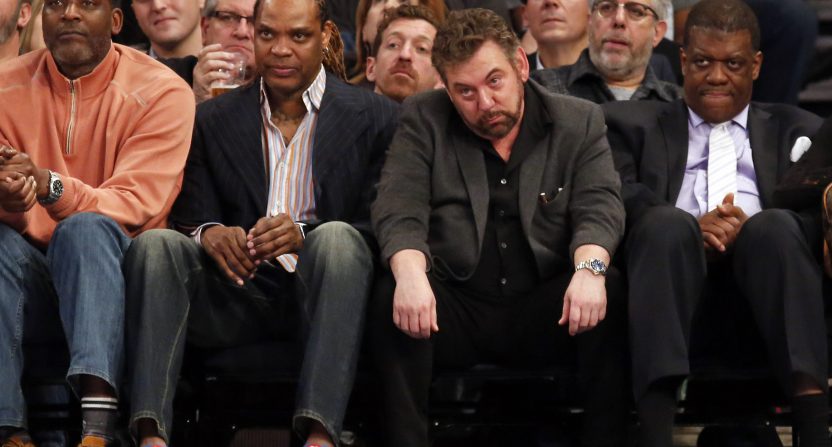 Earlier this summer, WFAN host Maggie Gray went off on Knicks owner (and MSG head) James Dolan after Dolan released a hacky song many assumed to be about sexual misconduct allegations against his former friend Harvey Weinstein.

Now, MSG is reportedly retaliating against WFAN and Entercom, WFAN’s parent, via a variety of measures, including not allowing Knicks or Rangers players to appear on WFAN. This is via Andrew Marchand’s story in the New York Post:

In retaliation for a summer rant by WFAN host Maggie Gray, Dolan’s MSG has ordered all of its businesses across the country to shut down working with Entercom and banned Knicks and Rangers players, as well as MSG broadcasters and personnel, from appearing on the station, according to officials involved in the decision.

In Gray’s summer rant, she called Dolan a “vile piece of trash,” among other things. The Dolan takedown was brought on because Dolan, with his band, JD and the Straight Shot, released a song called, “I Should’ve Known,” perceived to be about producer Harvey Weinstein, his longtime friend, who has been accused of raping and sexually harassing dozens of women. Gray thought it was hypocritical in light of the Garden having been found liable for a hostile work environment in the Anucha Browne Sanders sexual harassment suit in 2007.

Gray’s rant did get a touch personal, and it also contained some quality burns:

“You are a vile piece of trash,” Gray said about the 63-year-old Dolan on the show she hosts with Chris Carlin and Bart Scott. “You let Isiah Thomas call this woman [Anucha Browne Sanders] the b-word so many times she sued your ass, and she won! And then what did you do? In 2015, you brought Isiah Thomas back into the building to run the Liberty of the WNBA. You are a human embodiment of an online troll. People on Twitter couldn’t even come up with something that stupid …

“I might never get back into The Garden, even with a press pass, after this, and I don’t give a crap. I’d rather not step into that building that’s owned by this hypocrite and this disgusting, disgusting human. Yeah, you should have known. You did know. I forgot for 30 seconds just how embarrassing James Dolan is. Never again. Take your stupid song and everything you stand for, and shove it up your colossal rear end. I’m done with the Knicks.”

Gray ended up apologizing on the air for the tone of her comments last week, while standing by the content, though apparently that didn’t sway Dolan from his revenge quest. Via the Post, this is the MSG statement on the matter:

“Entercom aired a hate-filled rant directed towards MSG, its employees and its Executive Chairman in August of this year,” Kim Kerns, an MSG spokesperson, told The Post. “They chose to take no action to remedy this until the start of this season. Only after learning they would not receive special access to players and coaches did they elect to offer an insincere half-hearted apology. We wish them no ill will. However, we decline to carry on a business relationship. We will continue to afford Entercom league-mandated access only.”

It actually kind of feels like they wish Entercom some ill will, at least, doesn’t it?

Speaking of ill will, we have former WFAN personality Mike Francesa, who has always been quite fond of Dolan, and who decided to go off on a massive rant today in the wake of this report.

Look out below! The big fella is in a bad mood today, and I think we know why if you saw my last RT. pic.twitter.com/ukslAZ8dj3

Take a peek under here and you'll find @MaggieGray. pic.twitter.com/nI9OXIpgjn

So, we have James Dolan being so thin-skinned that he can’t let it go when a radio host decides to take him to task for his historical lack of institutional control when it comes to sexual harassment that he wages a war on an entire broadcasting company, even after an apology. We have Mike Francesa ranting at clouds. And we have WFAN unable to bring on players from either the Knicks (who are bad) or the Rangers (currently in last place in their division.)

In other words, a Monday in New York.