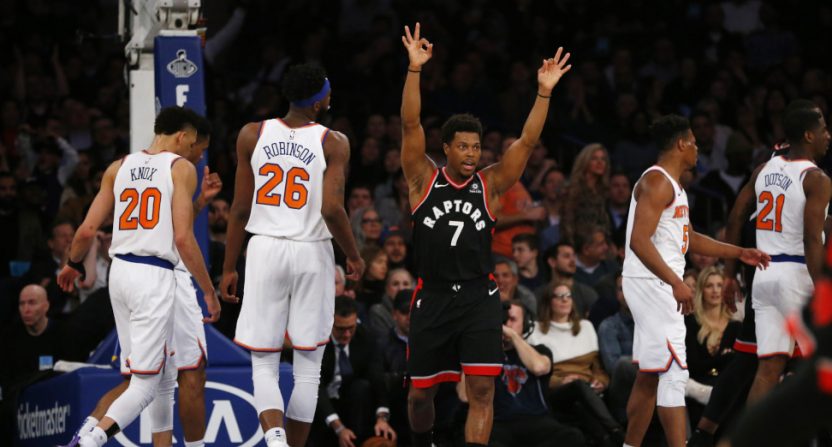 The NBA’s Christmas Day game matchups are always interesting, as those tend to be some of the highest-rated regular season games they show, so there’s an emphasis on desirable matchups. But there’s always a balance between team performance (which has a lot to do with national interest in them) and market size (which matters for the amount of local viewers they can bring), and this year, that balance appears to have shifted towards performance.

There are some notable exits from the 2018 lineup, especially the New York Knicks. The Knicks went a NBA-worst 17-65 last year and haven’t made the playoffs since 2013, but they play in the top media market and have played in Christmas Day games in 53 of the 71 years the NBA has done this. That’s more than any other team; the Lakers are second with 45 appearances. Meanwhile, the Oklahoma City Thunder, the Portland Trail Blazers, and the Utah Jazz are out as well.

On the other side, notable additions include the Toronto Raptors and the New Orleans Pelicans. The Raptors are the reigning NBA champions, but they’re also a team without a local U.S. TV market and a team that’s only played on Christmas once before. Meanwhile, the Pelicans have highly-hyped rookie Zion Williamson, but play in the 50th-largest U.S. TV market and have only played on Christmas twice. The other teams added are the Denver Nuggets and Los Angeles Clippers. Here are the matchups for 2019, as per ESPN’s Adrian Wojnarowski, Tim McMahon, and Malika Andrews:

The Milwaukee Bucks will travel to Philadelphia to play the 76ers on Christmas Day, league sources tell ESPN.

So six of the teams there are carryovers from 2018: the Warriors, the Rockets, the Lakers, the Celtics, the 76ers, and the Bucks. All except the Lakers were playoff teams last season, and the Warriors were conference champions, while the Bucks were conference finalists. Interestingly, the Western Conference finalist Trail Blazers were dropped, but the NBA champion Raptors were added, and the Nuggets and Clippers were both playoff teams last year too. (So were the dropped Jazz and Thunder, but the Knicks certainly weren’t with that NBA-worst 17-65 mark.) And while the Pelicans were 33-49 last year, there’s a lot of intrigue around them with Williamson.

Thus, this looks like a stronger slate of matchups from a perspective of drawing in national viewers. However, it will be interesting to see how the ratings go in New York without a New York team playing (especially given the Knicks-on-Christmas tradition), and how the ratings turn out for Celtics-Raptors (while the Raptors set Canadian records in the playoffs, their run had a lot to do with diminished Finals ratings in the U.S. thanks to the lack of a local market). At any rate, the Raptors can’t complain about not getting a national U.S. TV slot this time around.

We’ll also see when these games slot in; Clippers-Lakers and Rockets at Warriors are both in Pacific Time, while Denver’s in Mountain Time (however, last year saw the MT game with the Jazz go last, after the PT Lakers-Warriors game) and Philadelphia and Toronto are both in Eastern Time. Last year’s time slots were noon Eastern (Bucks-Knicks, ESPN), 3 p.m. Eastern (Thunder-Rockets, ABC), 5:30 p.m. Eastern (Sixers-Celtics, ABC), 8 p.m. Eastern (Lakers-Warriors, ESPN), and 10:30 p.m. Eastern (Blazers-Jazz, ESPN); we’ll see if this year’s follow that pattern or if they’re shaken up a bit. At any rate, there should be some interesting ones here.