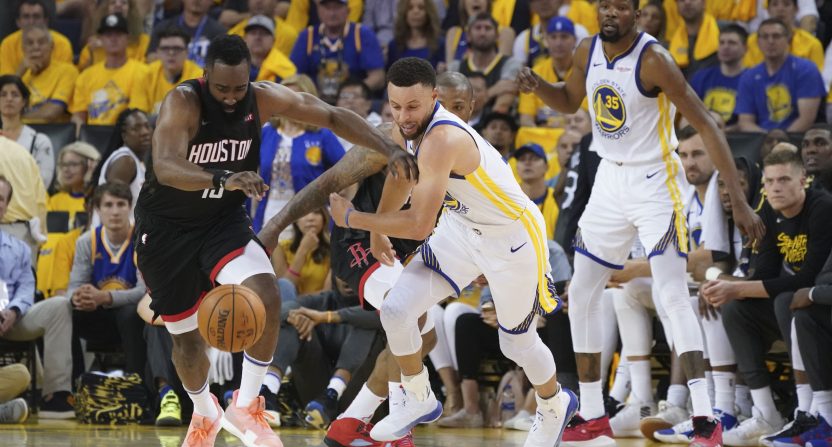 The NBA has been riding ratings highs for a few years now, but this season will reportedly be a drop overall.

According to John Ourand and John Lombardo at Sports Business Journal, the league saw a 4% decrease in local television ratings this season, thanks in part to the dismal state of some big-market teams, including the Bulls and Knicks.

The New York Knicks (down 38 percent on MSG) and Chicago Bulls (down 24 percent on NBC Sports Chicago) had two of the four biggest local TV ratings decreases this season. The Bulls’ 1.36 rating is the team’s lowest in 13 years.

Not surprisingly, the biggest ratings decline came in Cleveland where the departure of LeBron James from the Cavaliers caused Fox Sports Ohio ratings to drop 58 percent. Conversely, James’ new team, the Los Angeles Lakers, posted a 31 percent ratings increase on Spectrum SportsNet — the team’s highest since 2013.

According to the data, more teams (15) went up than went down (12) in the year-over-year ratings, which means those big market teams hurt the overall numbers quite a bit. It wasn’t just the local broadcasts that suffered this season, either, as ratings for nationally televised games took a hit as well.

Game telecasts across ABC, ESPN, TNT and NBA TV in 2018-19 (1.2 million average viewers) were down 5 percent from last season, which was the best audience since the 2013-14 season. NBA games this season were still up 3 percent from two seasons ago. Individually, each network saw a drop for 2018-19.

Early playoff returns are also somewhat disappointing, though maybe to be expected; the majority of first-round series weren’t competitive, and LeBron and the Lakers are sitting at home. That’s not a recipe for big ratings early on. The Warriors posted the top local rating in the NBA, which isn’t really a surprise. But their numbers on NBC Sports Bay Area actually fell again, continuing a trend:

The defending NBA champion Warriors had the league’s highest local rating, posting a 7.42 on NBC Sports Bay Area. Still, this year’s rating was down 11 percent, suggesting that “Warriors fatigue” could be affecting the team’s ratings. This marked the third consecutive season that the Warriors’ local ratings declined.

Should the league be sounding the alarm over the 4% decline? Probably not yet. The aversion to competitiveness shown by the Knicks and Bulls is clearly a big anchor on the league’s local numbers, and seeing more teams go up than down is a good sign overall. The Warriors fatigue is also probably real, but that problem might solve itself this summer with Kevin Durant an impending free agent.

The playoffs look likely to feature teams like Denver, Portland, and maybe Toronto and Milwaukee making deep runs; that might not mean ratings gold this year, but it does lay the foundation for more teams to be familiar to national fans going forward. That could pay dividends if the league’s current power structure changes.