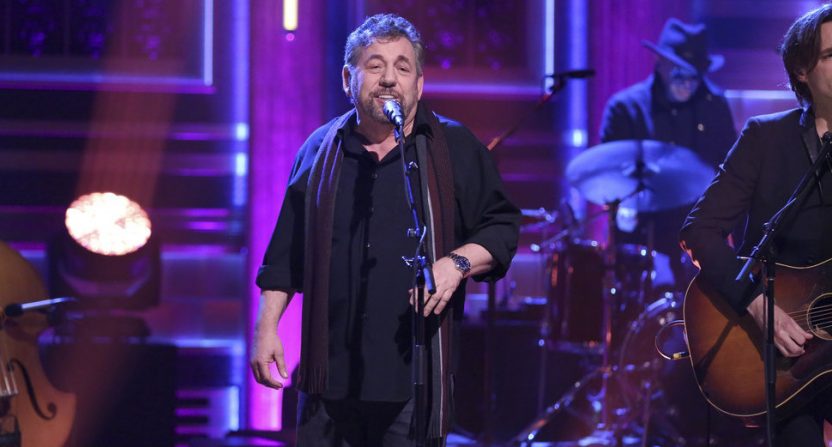 New York Knicks’ owner Jim Dolan is in the news yet again, and this time, it’s for some negative comments about certain members of the media. After a Knicks’ fan told Dolan “Sell the team” on Saturday and Dolan responded by banning the fan from Madison Square Garden for life, there’s been plenty of criticism of Dolan in the New York media. Dolan (seen above with his band JD and the Straight Shot on The Late Late Show with Jimmy Fallon in 2016) appeared on ESPN New York’s The Michael Kay Show Tuesday to address some of that, but he also had a bunch to say about why he banned the New York Daily News (and Knicks’ reporter Stefan Bondy in particular) from press conferences, and about how he thinks Ringer founder Bill Simmons is tampering with his team. Here are those quotes, from James Herbert of CBS and Mike Vorkunov of The Athletic:

pressed about this, dolan said, "i just don't get the bad optic thing." he went on to say. "the reporters that hate the team — hate the team, I mean, I'm literally, it's not just me, they hate the team, and by the way the team doesn't really love them either, why do they come?"

James Dolan on @BillSimmons saying he's considering selling Knicks:
"There are teams that do not want us to get free agents. Some in particular. He’s very close friends with the GM of one team. What they’re doing is they’re trying to destabilize because they know we’re favored." pic.twitter.com/GbaThmnwx3

James Dolan joins @TMKSonYES to discuss the recent incident at MSG, and notes, "I am not selling the team." pic.twitter.com/rZiHrKmmap

And Simmons responded with his own commentary on Dolan’s ownership:

Clearly — the biggest lure for future free agents is the perennially stable Knicks franchise, all those playoff wins and the leadership of owner James Dolan. A new owner might scare them off. https://t.co/VAHBiWDlPH

This is a whole lot of drama, but it’s particularly interesting to see Dolan not only excluding certain journalists like Bondy for “wishing ill will” towards the team, but then also specifically saying Simmons has an agenda to “destablize” the Knicks. Those are both bold claims, and ones not particularly supported by what’s out there. And it’s also fascinating to see Dolan think that criticism of his team must be agenda-driven, rather than just because his team is bad.

But Dolan has long been extremely sensitive to media criticism, from calling Rupert Murdoch to axe a negative FS1 ad campaign to having all of MSG battle WFAN over comments from Maggie Gray to keeping clip-file dossiers on reporters who cover the Knicks, Rangers and Liberty. And this is just the latest move on that front. It’s notable to see Dolan officially go to war with the Daily News and Simmons, though, and that seems unlikely to assuage outside concerns about his ownership.