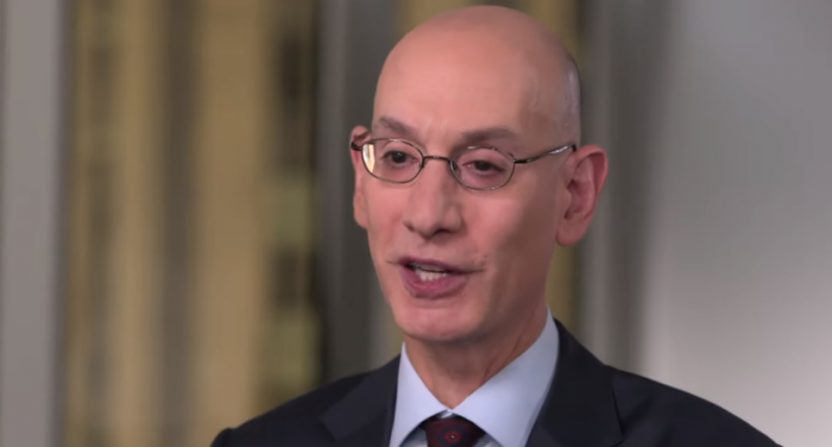 NBA ratings had some declines this year, with some of those ascribed to LeBron James heading west to join the (eventually non-playoff) Los Angeles Lakers. Along that front, there were some complaints from East Coast fans and media that games they wanted to watch (especially those with LeBron) were starting at a time later than they preferred, a complaint often raised by media members in other sports. And that’s now led to NBA commissioner Adam Silver telling NBC’s Today (of all places) that his office will talk to teams this summer about possibly moving games up. Here’s his full 26-minute interview with Today‘s Craig Melvin; the key part of the western comments comes around 20:10:

Here’s a partial transcription of that:

“Face it, LeBron is one of the biggest stars in the world, and he also played in the East.

And so, the reason I look a little bit tired is a lot of our games are in the West, and it’s late at night. And I recognize most people choose to go to sleep at a reasonable time. And so, from a rating standpoint, not having LeBron in the playoffs, not having him in the East, has clearly impacted ratings.

…A lot of young people who are our core fans, I’m sure you see this in your business too, aren’t necessarily subscribing to cable and satellite the way they did historically, so that’s something we’re very focused on. But we have enormous confidence in our product.”

After that, Melvin asks if the current West Coast dominance (the Warriors are appearing in their fifth-straight Finals and have won three of the last four) is “not necessarily that good for business,” and Silver responds:

It’s not bad for business. I only say, sometimes I forget, fifty percent of television households in this country are in the Eastern time zone. And so if your West Coast games start at 10:30 at night in the East, you’re invariably going to lose a lot of viewers around 11, 11:30. I mean, you can just chart it. You see how many television households turn off around 11:15, 11:30 at night, just because people have to get up for work in the morning.

I mean, it is something we can address. We’re talking about it. I mean, it would obviously be less convenient to those fans on the West Coast if we played even earlier. I mean, just think about people getting to those arenas after work if you start a game at 6 p.m. local time in the West. It’s not the most convenient thing. It’s not as convenient for a television watcher on the West coast, either. But when you look at the league from a national standpoint, it may make sense to play a little bit earlier in the West. And that’s something we’re going to talk to our teams about this summer.”

It’s interesting to hear this kind of talk, as game times seem pretty solidly established by this point. And as Silver notes, any sort of change here would be problematic for West Coast fans, both those who attend games and those who watch on TV. The current start times may not be perfect, especially for East Coast viewers of West Coast teams, but they’ve been designed as a compromise between local attendance, local TV ratings and national TV ratings, and it’s far from clear that the underlying factors there have been altered enough to necessitate a change (and specifically, that the movement of one particular player like LeBron is worth making that kind of change).

Also, later start times during the regular season and the early rounds of the playoffs have some national TV merits too, especially when it comes to doubleheaders. It may make sense to move up some games when it gets to a only-one-game-a-night stage, like the conference finals, but it’s not like the regular season or those early rounds only offer West Coast games. In fact, part of the complaint here seems to be that more people in the East now want to watch the West Coast teams rather than the teams in their own time zone. But that seems like at least partially a competitive balance issue rather than a start time issue. And that balance might swing again this summer, especially if teams like the Knicks and Nets can make some free agent splashes.

And while there may be some national logic to moving West Coast games up, that may not sit well with West Coast teams and their fans. It’s also far from a guarantee that moving West Coast games earlier improves national TV ratings; it can boost East Coast ones while hurting West Coast and Midwest ones. For example, consider MLB’s move with Sunday Night Baseball this year, where they bumped those games up an hour (to 7 p.m. ET) and took some ratings declines as a result in exchange for less complaints from players who have to play elsewhere the next day, East Coast fans who have to go to work the next day, and cranky old media members who hate games after their bedtimes. MLB seems fine with that tradeoff, but it’s worth noting that it is a tradeoff; just bumping games earlier doesn’t necessarily mean they’ll draw better ratings.

But it is notable that we’re in an era where leagues seem more willing to tweak game times from what’s typically worked, whether that’s over TV issues, in-game issues or not. In addition to the MLB move, the NFL moved up its primetime games last season, albeit only slightly (from 8:30 to 8:15 or 8:20 for Monday Night Football and Sunday Night Football respectively, and from 8:25 to 8:20 for Thursday Night Football). So there are certainly leagues willing to play around with the TV times, and maybe the NBA will join them.

And it’s notable that Silver’s saying the league office will talk to the teams about this, even if that’s no guarantee any move will actually happen. We’ll see if anything comes of this, but it’s fascinating that the NBA’s considering TV time moves, and that this move appears to be at least partly about where LeBron’s playing. Talk about one player’s impact on the league.