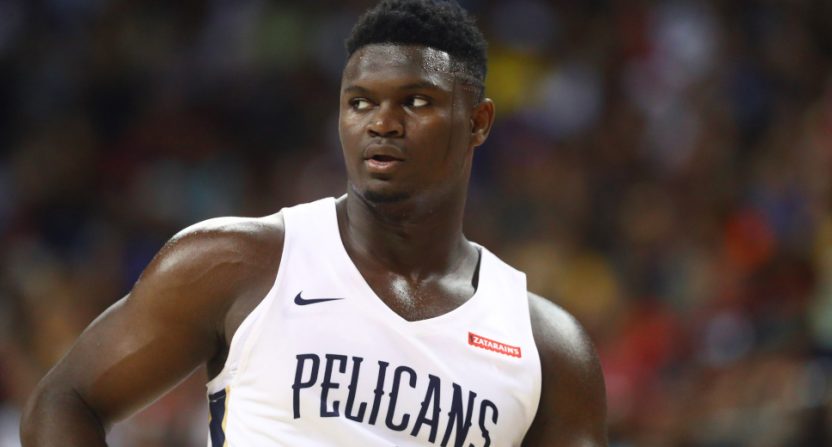 The 2019-20 NBA season presents some interesting conundrums for broadcasters, as there’s seemingly a lot of national interest in teams like the Toronto Raptors (the defending champions) and New Orleans Pelicans (now with first-overall draft pick Zion Williamson) that have no local market or a small local market respectively, and relatively little interest in bad big-market teams like the New York Knicks. With the ABC/ESPN Christmas Day schedule that leaked last week, we saw both the Raptors and Pelicans featured there (for the second and third times in their history respectively) and the Knicks dropped. And now, the full release of the NBA on TNT schedule has the Pelicans with more games there, appearing seven times versus four last year. It also has a massive jump for the Los Angeles Clippers (now with reigning NBA Finals MVP Kawhi Leonard), who went from four TNT games to 11.

Those Pelicans games include a couple of prominent matchups. First, they play on Opening Night against the Raptors, the first game of a doubleheader with the Los Angeles Lakers and Clippers. They also play on Martin Luther King Jr. Day against the Memphis Grizzlies, the first game of a tripleheader that also features the Lakers and Boston Celtics, then the Golden State Warriors and Portland Trail Blazers.

Meanwhile, the Raptors actually declined from eight TNT games last year to five this season despite being the defending champions, but they have a prominent spot against the Pelicans in that first half of the Opening Night doubleheader on October 22. (The second half is Lakers-Clippers.) And this is a long way from the one TNT game they got in 2017-18, back when general manager Masai Ujiri called it a “bunch of BS” that they weren’t on national TV more. (They also have six games on ESPN, up from four in 2017-18.) And while the Knicks rose from one TNT game last year to two this year, that’s still well below the national exposure they’ve received at times despite their on-court struggles.

The most frequently-shown teams on TNT will be the Lakers and Warriors, with 12 appearances each, but that’s actually down from the 14 and 13 TNT games they respectively had last season. The Clippers are next with 11 appearances this year, up from last year’s four. The Milwaukee Bucks, Houston Rockets, Celtics and Blazers each have 10 appearances this year, which is a rise for the Bucks and Blazers (eight and six respectively last season), but a drop for the Rockets and Celtics (15 each last year). The boost for the Bucks and Blazers is also notable considering that those markets aren’t huge, but those teams both did well (conference finals appearances) last season; that fits with the overall trend of the NBA’s national scheduling seeming to emphasize performance this year.

Another interesting element here is the way that some of these times will be shifted to try and boost East Coast viewership. Last year saw significant NBA viewership declines (26 percent for the TNT games by November, 18 percent by February, 12 percent for the season, a five percent drop for all national broadcasts for the season, and a four percent drop for all local broadcasts), and some of that was blamed on LeBron James moving west. That also led to commissioner Adam Silver saying in May his office would talk to teams about starting nationally-televised games at an earlier time to benefit East Coast audiences, saying “It may make sense to play a little bit earlier.” And that’s now happened, mostly for ESPN games but also for some TNT games. Here’s what the league’s schedule release says there:

We’ll see if those time shifts wind up making much of a difference to the ratings, and we’ll see just how many people tune in to watch the increased broadcasts of teams like the Pelicans. But hey, Williamson made a huge difference in college basketball and Summer League ratings, so betting on him probably isn’t a bad idea.