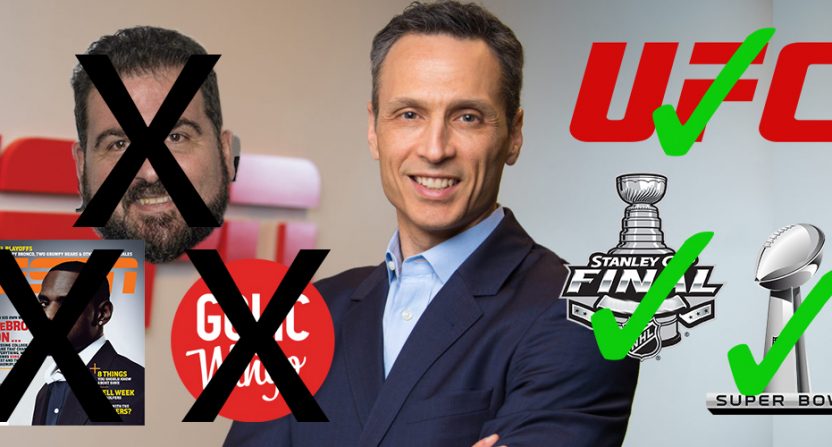 A little over three years ago, Jimmy (or James? It’s not exactly clear what he prefers to go by) Pitaro was announced as ESPN’s new president. I’d argue that over the last two decades plus, no three year period has seen both the company and the larger media landscape change as much as Pitaro’s first three years at the helm.

ESPN today both looks different and feels different. It’s like my home now after 19 months of cohabitating. It’s changed…a lot.

But unlike my home, which 99 people out of 100 would say has drastically changed for the better, is ESPN actually better for consumers?  I rarely find myself on the fence on anything, but this is one I’ve mulled writing about in both directions over the last few months. Here are the cases for both.

To be concise, ESPN is smaller now. On one front, there were layoffs, but also contracts were not renewed. This resulted in positions being eliminated without tripping the layoffs alarm.

There are fewer people covering sports at ESPN. There are fewer people or, at the very least, less experienced people, behind the scenes. The amount of non live event content (more on this later) has trended the wrong way. Some of the content that has survived the cord cutting and pandemic aided purge has been moved behind the growing ESPN+ paywall, making once-free content unavailable for non-subscribers.  For those who pay up, ESPN might indeed be better than it was three years ago, but even that is no given.

30 for 30 output has decreased. OTL (as a standalone show) is no more. Key executives central to those series and other, more journalistic endeavors are gone. So are Bob Ley, Trey Wingo, Mike Golic, Ryen Russillo, and Dan Le Batard. Tom Rinaldi headlines a pretty significant (and growing) list of long-term ESPN personalities that have landed at Fox. High Noon, the ambitious daytime show hosted by Bomani Jones and Pablo Torre, is no more, and we’re close to putting Michelle Beadle on the side of a milk carton at this point.

In terms of first run original content (outside of live events), ESPN2, ESPNU, and ESPNEWS have largely been decommissioned. It’s almost exclusively all reruns now. The company’s social accounts have morphed from being informative to engagement-thirsty viral video recyclers. ESPN the Magazine is now a thing of the past.

On most fronts outside of live sports, there has been a lot more subtraction than addition. For many ESPN feels like a restaurant that has slimmed down their menu and a lot of the things you used to order are gone. Because of this, ESPN now feels smaller and less cool. It’s not aging as well as it once did. On the heels of this winter’s layoffs, morale was described by many as being the lowest it’s ever been (although, let’s be fair: 2020 was a nightmare and wreaked havoc just about everywhere in the world).

The case that ESPN is in decline is not a tough one to make. But paradoxically, that may not be the case, and ESPN may actually be on its way to ascending to new heights.

The case that ESPN had endured some turbulence, and is now on its way to unseen relevancy and business success

As much as my friends in Bristol (if I have any? did I ever?) stewed reading the last section, this one is perhaps easier to make.

In December, ESPN announced they had acquired one of the crown jewels of the sports media world in CBS’s SEC Game of the Week. Since then, ESPN has also announced a new deal with the NHL, and one somewhat more significant deal: their new agreement with the NFL. The NFL deal brings two Super Bowls to ABC, an exclusive game to ESPN+, a second annual playoff game, and flex scheduling for Monday Night Football, among other details.

All of those parts of the deal are quite significant to ESPN. The added value ESPN is getting in this TV deal alone is potentially the biggest positive development for the company in a decade. And while they did pay more for these items, the percentage increase was far lower than what other networks paid for their equally prized extensions. Considering the rocky relationship with the league Pitaro inherited when he became ESPN President, this was the culmination of incremental relationship building with the NFL. And we may not be done yet, as many believe the NFL Sunday Ticket will leave DirecTV and become a major tent pole for ESPN+ sometime down the road.

That brings us to the other core strategic area of the Pitaro era, which is streaming. According to many insiders, ESPN’s streaming strategy had become a growing sense of friction between Burbank (Disney) and Bristol (ESPN) under John Skipper. There are some wild, partially confirmed and partially refuted, stories on the matter. While Burbank has taken a much more active role in ESPN’s streaming strategy, I don’t think it can be argued that the joint custody situation with ESPN+ has largely worked and over-performed expectations in its infancy.

ESPN+ is now at the core of the company’s ongoing business strategy, bolting on whatever sliver of live rights they can onto the platform (NHL, MLS, Big 12, ACC, UFC, and now the NFL, along with countless others) and filling in the cracks with original programming and written content, though I imagine the traffic and viewership there is nominal, but likely keeps just enough subscribers from unsubscribing once their sport of choice hits the offseason.

Pitaro inherited the collapsing cable bundle. Through their most recent TV deals, ESPN and Disney will be able to not only continue to prop their cable business, but will likely bring in a ton of money through elevating ABC’s retransmission fees (ABC was the only network without Super Bowls and regular NFL games, hence a lower fee) and continuing to advance ESPN+’s significance and reach (the “Tri-Cast” model is being celebrated by fellow sports media nerds like it’s the first available COVID vaccine).

Putting aside personal tastes, nostalgia, and loyalties, the Pitaro era at ESPN (from a pure business strategy and execution perspective) has been pretty flawless. We’ve seen layoffs, cost cutting, and growing new revenue streams. Somewhere, Lane Pryce is smiling. Meanwhile, competitors seem to be fading in the distance as more rights deals shift towards and ESPN. NBC decided to shutdown their national sports network, Fox is parting with their Thursday Night Football package, and CBS will be without power 5 college football once their SEC deal winds down.

Ultimately, your view on whether or not ESPN has improved depends on the sports you watch the most and the personalities and programs you most cherish. Another central factor is if you’re subscribed to ESPN+ and are happy with that value, or mad that you had to spend the money for whatever additional content you get with that. Depending on your situation, you may be ahead or you may be behind there. I’m still processing that myself.

But just like commissioners of leagues and conferences are not beholden to fans, I think it’s fair to say Disney is quite satisfied with Pitaro’s stewardship of ESPN (Disney’s stock is up nearly double since he’s been there). The financial peril that some less than serious sports media prognosticators warned of hasn’t come and doesn’t seem to be coming. Instead, the Super Bowl is.