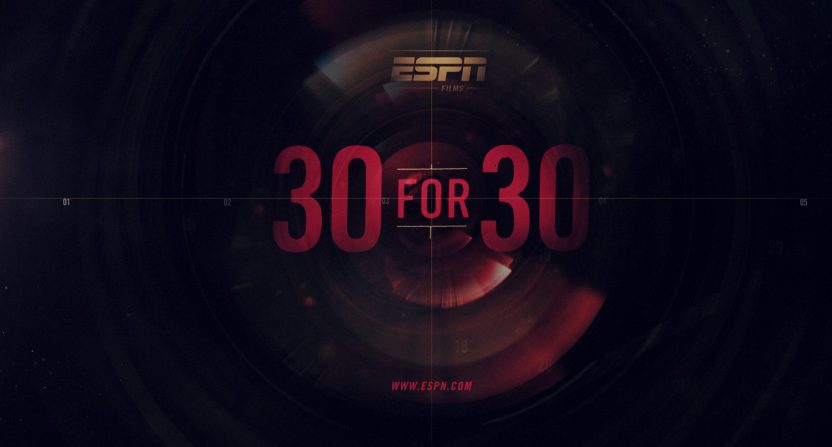 IT'S OFFICIAL! Our next film "The Last Days of Knight" will premiere and start streaming April 12 on ESPN+ pic.twitter.com/lU70gUyl3X

As a fan of the series (and the documentary space in general), I was a bit alarmed by what’s shaping up to be a calendar year where we may only see one new installment air on ESPN. With that in mind, I took some time to look back at the past, present, and future of 30 for 30. 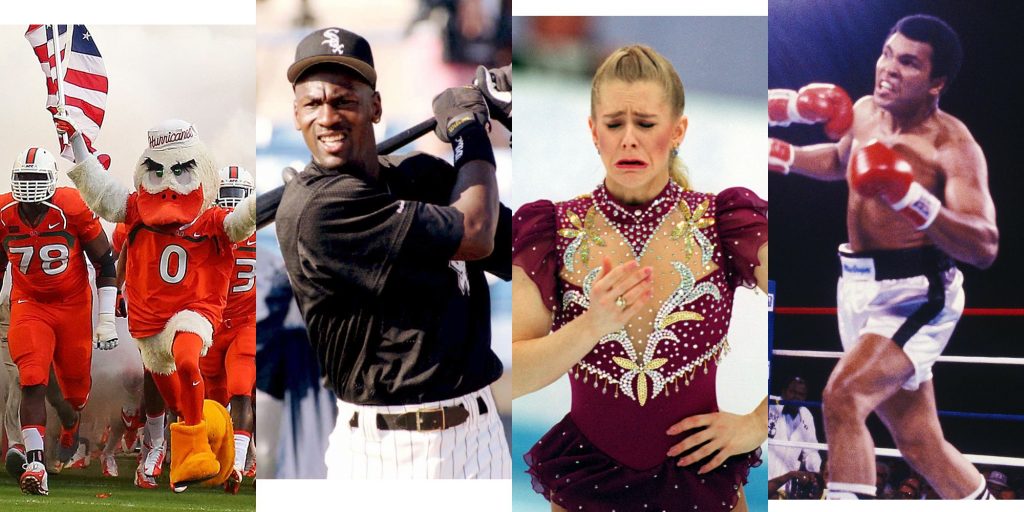 ESPN started 30 for 30 in October of 2009 with the aim of releasing 30 documentaries (obviously). The amount of 30 for 30s depends on your methodology for counting.  My count is at 98, which includes the 13 films released under the ESPN Films Presents banner, a branding dilemma for ESPN they’ve since sorted out.

My count of 98 includes the last installment on ESPN+, while also counting OJ Made in America as one film (ESPN originally counted it as five, but then removed it as a 30 for 30 later on) and not counting the suspended Down In The Valley.

If you look at the release schedule by year, it looks like this.

So from an output perspective, 30 for 30 has been *extremely* consistent over the years. Quality wise, at a high level, I’d say 30 for 30 has been consistent throughout, with about a quarter of the films being great, half being anywhere from really good to OK, and then maybe the last quarter grading out between meh and outright misses.

While having stretches of around half a year without a new film has been certainly occurred a few times for ESPN, usually that drop in activity was followed by a super busy fall schedule of new releases.

Is 30 for 30 beginning to throttle down?

We’re almost at 100 films. There were supposed to be only 30, so perhaps the series just creatively has to begin tapering off output. Is this what we should expect going forward? I raised the question with vice president and executive producer of ESPN Films and 30 for 30 Libby Geist and luckily, this seems to just be an unique outlier.

“I think how often and how many we put out going forward is something we’ve talked a lot about. This year is definitely an outlier. As you know, we’ve dabbled in docuseries with Enhanced, we have a Basketball Love Story coming up, which we can get more details to you in a few weeks about that rollout. We sort of leaned into our podcasting…and certainly ESPN+ has been a factor in some of the decisions we’ve made and frankly, the resources put towards the department ESPN Films.

I think this has been an interesting year only because we’ve been spread out in a few different directions. Obviously, 30 for 30 has been quiet this year, but those projects I just listed are truly the reasons why. I can tell you that we’ve got probably fifteen 30 for 30s  – and those are one or two hour 30 for 30s – in various stages of production right now.  I think what I want and hope you can help me do, is to say “we very much understand the value of 30 for 30 and how strong that brand is, so although we’ve been spread a little thin this year, we are going to announce soon a slate of some big projects that our 30 for 30 fans are going to get excited about.”

There’s much more to come, but I think we know the value of big stories, and for us, big directors and the right directors is important. We’ve got those lined up and I think we’ll come back to you next year in a big way.”

(you can check out more from my interview with Geist here)

But will new installments actually air on ESPN or be marooned on ESPN+? 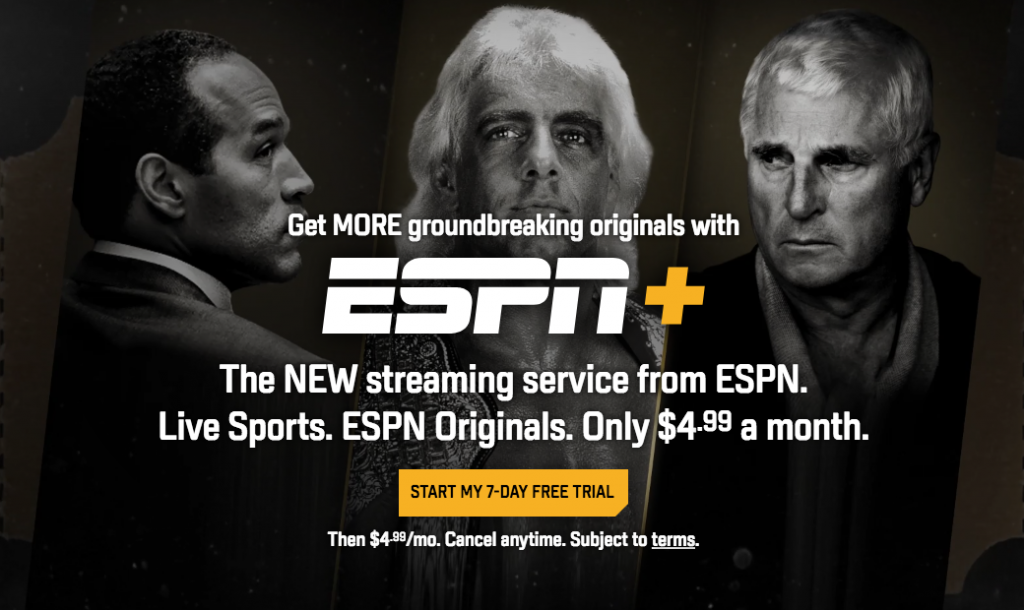 I’ve dug into this question a bit. There are certainly rumors out there that we may see some, and perhaps even all, new installments debut on ESPN+. Geist shared with us on what we could see there, although I got the sense the decision has not been made yet and could come further down the road and will likely be influenced by those higher up on the ESPN/Disney org chart.

“It’s always been stated to us that 30 for 30 is a huge draw for ESPN+, especially in these early days as we are trying to lure subscribers. So that was very intentional on the first days of Plus. We’re still figuring out our strategy there. I can tell you that for me, TV is a really important place for 30 for 30 and its fans. So, I think TV is definitely in the future for, I would say, most if not all of the 30 for 30s coming up.  We do still have to figure out a little bit of a strategy there. You’ll probably see at least one more 30 for 30 on Plus again in these early days as we try to figure things out and lure people there. Beyond that, we feel pretty strongly that TV is a really important place in terms of exposure and just getting eyeballs and excitement around 30 for 30s. I would say that is more of using 30 for 30 as a draw towards Plus in these early days than a long term plan.”

Geist would later tell me that the 30 for 30 and ESPN Films content, like their new Alabama training camp series, had been measured as the number one reason people were subscribing and watching ESPN+.

The reality is that ESPN+ is ESPN’s biggest priority right now and if 30 for 30 moves the needle there, it will be a tightrope to walk in terms of putting beloved content behind that new pay service to lure new subscribers while also maintaining the enthusiasm, notoriety, and authority that the brand currently enjoys on cable TV.

Not as active in the fall anymore 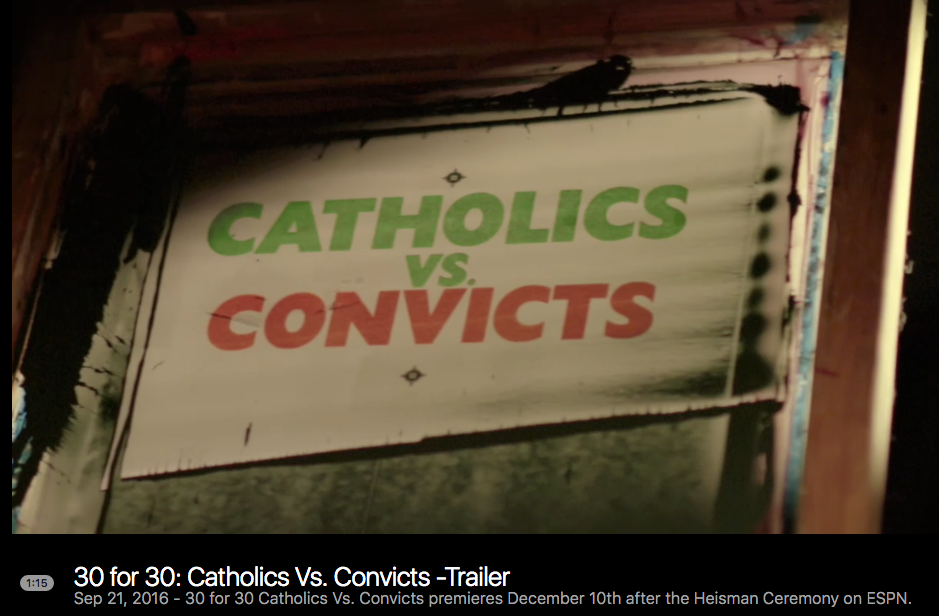 ESPN’s busiest month has been October, with 29 releases occurring in that month. From 2009-2015, ESPN would roll out a fall run in which an installment would air weekly for a period of four to eight weeks, depending on the year. Depending on the length of the run, it could include the tail end of September and the early parts of November.

ESPN would usually then cap the year with a football themed 30 for 30 following the Heisman ceremony in early December. That time slot has served up some of the better installments in terms of the quality of those films as well as how they performed from a ratings perspective.  The network didn’t have a film air after last year’s Heisman and won’t this year due to boxing live rights obligations.

ESPN’s weekly fall release runs look like this by year, with below showing how many weeks in row ESPN aired an installment (the network hasn’t done this since 2015).

I miss the weekly releases in the fall, or moreso just the weekly runs in general. Spring, winter, summer…it doesn’t matter. The reliability of having those releases was nice and allowed me to plan watching them with friends.

This will be the third year in a row (barring a late surprise) that we’ll be without an extended run of new installments and looks to be the second year in a row without a post Heisman installment, which has historically been where ESPN has put out some of their best installments.

If ESPN does ramp up the output of 30 f0r 30 back to the nine or so film range per year we’ve grown accustomed to, a big question will be if we’ll see a return of weekly runs of new installments.

A lot of people say they are “boycotting ESPN”. We don’t need to get into why, as that’s a whole other topic, but the “boycott” itself is usually framed like this: “I’m boycotting ESPN, except for live games…and also 30 for 30s.” Some people will go on to say they’ll still watch SVP’s SportsCenter, or name another show or two that they’re selectively not boycotting.

Boycott espn? I don't watch that shit unless there's a game or 30 for 30 on

This is all funny because this “boycott” doesn’t hurt ESPN’s bottom line much at all, given that if you still have the channel and watch live games, they’re still making $10 a month off of you and might be losing a few pennies because you’re now watching Hannity or MLB Tonight or Law & Order instead of SportsCenter.

I wasn't watching ESPN anyway outside of 30 for 30 so a boycott ain't difficult for me.

I point this out because 30 for 30 has broken through with consumers. Even people who hate ESPN enough to pretend they are boycotting the network still can’t boycott the network because they need to watch certain games, and well, shit…those sports documentaries they make are pretty good too.

When people talk about businesses, they use the term “moats” to describe if their core business is protected from enemy forces. ESPN’s live rights are *by far* their biggest protection from the bursting cable bubble, Netflix, and people just staring at World Star Hip Hop videos on their phones.

Oh man. The new 30 for 30 schedule looks great. I may have to finally end my boycott of ESPN. It won't be easy.

But 30 for 30 is the second-most-referenced thing ESPN does outside of live games, and it’s something they only air less than a dozen times a year. The more casual sports fans probably can’t tell you the channel number other sports channels are, but can probably tell you their top three 30 for 30s.  For a sliver of sports fans, 30 for 30 is really the only non-live game thing they will watch and thus, nixing them or putting them on a streaming service is more or less chopping down one of the remaining legs in their content strategy. Without 30 for 30, some of these folks could actually become *real* boycotters and that’s something ESPN should consider as they mull the future of the series.

ESPN has been a good steward of the brand in an ever-changing media landscape, but I fear another year that mirrors 2018 in terms of reduced output and availability of the series would cause significant deterioration to the brand’s prestige going forward. Luckily, it seems it isn’t in the cards for now, but it’s something we’ll obviously keep a keen eye on going forward.