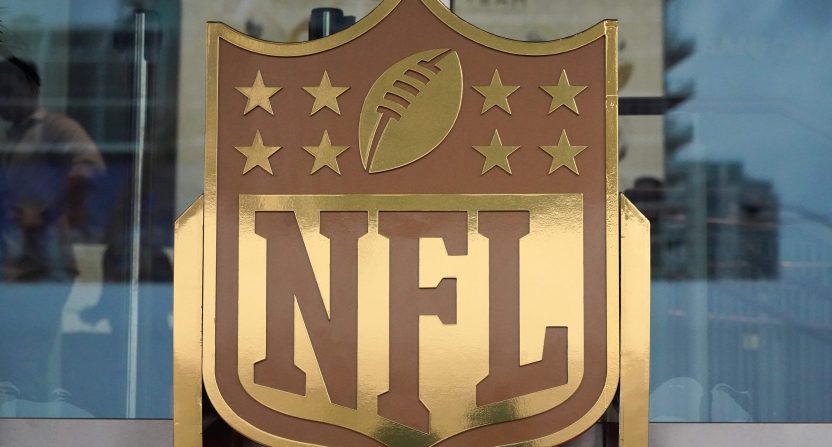 The NFL’s next round of media rights deals is now official, apart from Sunday Ticket and mobile deals. The league announced that news Thursday afternoon, with those new broadcast contracts set to run from the 2023 season through the 2033 season (however, some of them have provisions that kick in as soon as this season). And these deals with CBS, ESPN/ABC, Fox, NBC, and Amazon are largely as expected from past reporting, the most notable new detail being the total value of $10 billion per year reported by John Ourand of Sports Business Journal.

That’s close to double what the league got for these particular deals in the last round ($1.9 billion from Disney, $1.76 billion from Fox, $1 billion from CBS, $950 million from NBC, a total of $5.61 billion). But that was with a non-exclusive TNF deal with a big broadcast component, maximizing reach rather than revenue. The networks and Amazon are also each getting some more out of this new deal (particularly digitally). So while it’s a big price increase, there are also some new benefits for the networks and Amazon.

It’s worth noting that this release does not include a new deal for Sunday Ticket (currently with AT&T/DirecTV, $1.5 billion a year, running through 2022-23) or for mobile deals (Verizon, $500 million a year, through 2022-23). So there could be even more money for the NFL when those deals are done, whether they’re with their current providers or with other ones (in particular, there have been rumors about Sunday Ticket heading to ESPN+, Apple, or Amazon). It also doesn’t mention NFL Network, but Ourand’s report indicates that that network is likely to still carry enough Thursday and Saturday games to meet its distributor contract minimums, which fits with previous reporting.

There’s a lot of money here for the NFL, especially with this coming before a Sunday Ticket deal. Alex Sherman of CNBC has the dollar figures for each network and Amazon:

The NFL has a deal! Scoops here:
*Amazon gets full exclusivity for $1b per year (as CNBC had reported)
*NBCU paying about $2b for Sunday Night Football
*ViacomCBS paying $2.1b for AFC
*Fox paying $2.2b for NFC
*Disney paying abt $2.7b for ESPN/ABChttps://t.co/UYYR8xSrkr

Under these new deals, Fox, CBS and NBC will retain their Sunday-focused packages, ESPN will keep Monday Night Football (but will get some further ABC content as well, including more MNF simulcasts and two Super Bowls, and will get some ESPN+ content), and Amazon will be the big new figure, taking over Thursday Night Football exclusively. Here’s more from the NFL release:

With these agreements, the NFL has expanded its digital footprint to reach a broader audience while maintaining its commitment to keep all NFL games on over-the-air television. The new agreements will begin with the 2023 season and run through the 2033 season.

“These new media deals will provide our fans even greater access to the games they love. We’re proud to grow our partnerships with the most innovative media companies in the market,” NFL Commissioner Roger Goodell said. “Along with our recently completed labor agreement with the NFLPA, these distribution agreements bring an unprecedented era of stability to the League and will permit us to continue to grow and improve our game.”

And here are some highlights from each network’s release, starting in alphabetical order with CBS, which is touting expanded streaming on Paramount+, occasional extra playoff games, three Super Bowls, and more:

The new agreement, which begins with the 2023 season, allows for CBS Sports to broadcast and stream more Sunday afternoon games than ever before and also includes an expanded schedule of games featuring teams from the National Football Conference (NFC). In addition, the schedule is highlighted by 10 CBS doubleheaders, including the NFL’s most-watched window Sundays at 4:25 PM ET, eight singleheaders and the annual Thanksgiving Day game. CBS Sports will broadcast three Super Bowls over the length of the deal, including the first in the new agreement, Super Bowl LVIII in 2024, as well as Super Bowl LXII in 2028 and Super Bowl LXVI in 2032.

The CBS Television Network and Paramount+ will also present a full slate of playoff games each season, featuring the AFC Championship game, one Divisional game and one Wild Card game. A second Wild Card game will be added to the CBS Sports lineup during the 2024, 2029 and 2033 seasons.

…Paramount+ has been granted new and expanded rights for the streaming service, allowing for the flexibility to distribute NFL games on both the premium tier at $9.99 and the new $4.99 ad-supported tier that will debut in June. The rights begin with the 2021 season and extend throughout the length of the new deal to 2033.

Super Bowls Accentuate Expanded Postseason Offerings
ABC/ESPN will carry two Super Bowls (2026, 2030 seasons) as part of a rotation between the NFL’s media partners, marking the first time that an ESPN-NFL agreement included such Super Bowl rights. ABC last televised the Super Bowl in February 2006 (2005 NFL season). Also, ESPN will present more playoff action, adding an annual divisional round game to its schedule, which will continue to include a wild-card matchup.

…Monday Night Football To Include Three Weeks With Multiple Monday Games; Saturday Action Also Coming
ESPN will increase its regular-season schedule by 35% — six more games per year (from 17 to 23). It will include an ESPN game on Monday nights (including three weeks with a separate game on ABC), a Saturday doubleheader the season’s final week and the Sunday morning game on ESPN+. Monday Night Football, which has been aired on ESPN in primetime since 2006, remains cable’s most-watched series.

The added two Saturday games will take place during the final week of the regular season and will showcase matchups with playoff implications. Both of those games will be simulcast on ABC and ESPN.

Here’s how ESPN announced this on NFL Live:

With the new agreement, which begins with the 2023 NFL season, NBC and Peacock, NBCUniversal’s streaming service, will present Sunday Night Football through 2033 – a span of 28 seasons for NBC as the home of the NFL’s premier primetime package (since its 2006 debut). In addition, beginning with the upcoming 2021 season, Peacock will stream all NBC Sunday Night Football games and the Football Night in America studio show. Peacock will also produce a new exclusive, expanded postgame show following SNF each week.

Peacock will also serve as the exclusive national home of six NFL regular-season games – one each year from 2023-28 (giving NBC Sports an additional regular-season game in those seasons) – and will launch a virtual NFL channel, highlighting classic games, as well as NFL Films’ series, library, and archival content, which will all also be available on demand. NBC Sports will have the option to incorporate enhanced and interactive features in game presentations to be streamed live on NBC digital platforms, including Peacock.

Meanwhile, Amazon is taking exclusive control of Thursday Night Football, which will now be seen only there (except for the teams’ local markets, where games will remain on broadcast). So all of this adds up to significantly more money for the NFL. And that’s with some rights deals still to come.