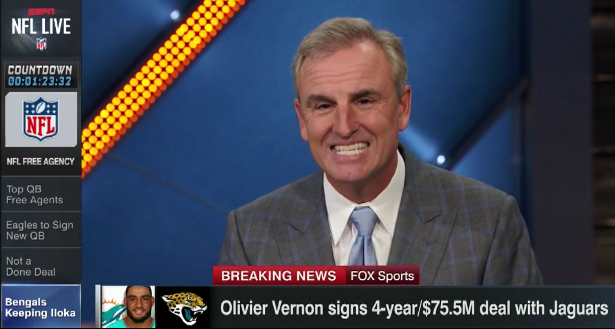 After more than 20 years at ESPN, Trey Wingo’s time with the network is finished.

As reported by the New York Post‘s Andrew Marchand, Wingo is being let go with no current on-air role available and his contract set to expire at the end of the year. His tenure as co-host of ESPN Radio’s morning show with Mike Golic ended on July 31, due in part to Wingo’s reported desire to stop working the early-morning shift. ESPN Radio subsequently overhauled its daily lineup, complete with a new morning show.

With that, there was no place left in the network’s TV or radio programming for Wingo to land. Letting him go before his contract officially expires appears a bit heartless, but ESPN may have felt that there was no other realistic option.

Can confirm,as @AndrewMarchand noted, that ESPN is not retaining Trey Wingo (who was solid on draft and narrating highlights on Monday reincarnation of NFL PrimeTime). With Wingo leaving ESPN radio & Rutledge, Ponder, Kolber holding ESPN's NFL studio jobs, nothing for him to do.

If he wanted to return to NFL Live, that was no longer an option as the network relaunched the show with a new lineup hosted by Laura Rutledge. Sunday NFL Countdown and Monday Night Countdown already have hosts in Samantha Ponder and Suzy Kolber, respectively. Additionally, leading ESPN’s NFL Draft coverage was reportedly viewed as an annual, three-day event that the network could find someone else to host and didn’t warrant a new contract.

Marchand reports that Wingo would like to move to NFL Network, which is certainly understandable with his experience hosting NFL Live and ESPN’s coverage of the NFL Draft. As of yet, however, the interest doesn’t appear to be mutual. But that can certainly change as negotiations take place and numbers are exchanged.

Outside of ESPN, it’s difficult to see where Wingo could be a fit besides NFL Network. Maybe NBC’s Football Night in America when Mike Tirico makes his inevitable transition to calling Sunday Night Football? But exactly when that happens is uncertain and Liam McHugh could easily take over that role. And NBC Sports Network’s daily lineup is full.

Other possibilities at different networks, perhaps covering different sports, might end up being roles that haven’t yet been created or established. (What if Turner were to get Thursday Night Football, for example?) Maybe something with Amazon as the streaming outlet tries to expand its TV and audio sports content?

Could Wingo end up anchoring local sports in a city where he might like to finish his career? That could be the best option.