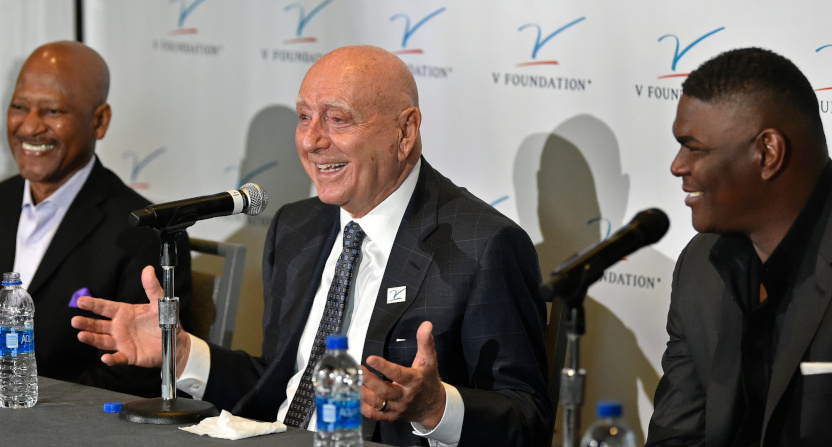 It’s been a rocky-at-times year for famed ESPN college basketball broadcaster Dick Vitale, who revealed he had lymphoma last October and kept working through his cancer treatment, but then had to take time off and then eventually shut down his broadcasting for the season thanks to dysplasia on his vocal cords. But things have been trending upward for the 82-year-old Vitale recently; he tweeted in February that his vocal cord surgery was successful, he tweeted in March that a scan showed no cancer, his 17th annual V Foundation Gala Friday raised a record $11.1 million (a massive jump over even the $6.5 million the gala raised last year; Vitale is shown above at that event between Rod Gilmore and Keyshawn Johnson), and he’s now been selected as this year’s recipient of the Jimmy V Award for Perseverance.

That award will be presented live during the ESPYs broadcast on ABC on July 20. And it’s particularly special considering Vitale’s connections to award namesake (and his ESPN college basketball broadcasting colleague) Jim Valvano, which including presenting Valvano with the Arthur Ashe Courage Award at the 1993 ESPYs (which led to Valvano’s famed speech). Here’s more on that from an ESPN release:

The ordeal, and the honor, is all the more poignant and symbolic considering that at the very first ESPYS in 1993, Vitale presented his great friend Jim Valvano with the Arthur Ashe Award for Courage, after which Jimmy V delivered the unforgettable acceptance speech that in many ways still epitomizes the spirit of the ESPYS, and led to the creation of the V Foundation for Cancer Research. In the years since, Dickie V has been one of the leading voices of the V Foundation. He has long hosted a gala that’s raised nearly $55 million for pediatric cancer research and the Foundation.

Said Vitale: “When I received the call from Jimmy Pitaro about receiving this award, I was absolutely blown away. I remember that day almost 30 years ago, when I stood on stage at the first ESPYS, introduced Jimmy V and witnessed him give that incredible speech we all remember. I reflected on his speech many times during my seven-month battle – ‘don’t give up, don’t ever give up Dickie V’ – and I remembered my mother and father, who taught me never to believe in ‘can’t’. Jimmy V was special and his legacy lives on. I am so grateful to receive this tremendous award in his honor.”

Vitale’s history at ESPN goes back to the very beginning. He called the first-ever college basketball game the network aired, Wisconsin at DePaul on December 5, 1979. Since then, he’s called more than a thousand games, his thorough knowledge of the sport brought forth in an enthusiastic, passionate, and never boring style. His “Vitale-isms” have taken on a life of their own, with “Awesome, baby!,” “Get a T.O., baby!”, “PTP’er” (primetime player), M&M’er (a mismatch), “Diaper Dandy” (freshman star), and many more all becoming part of the vernacular.

“Dick is one of a kind,” said Pitaro, Chairman, ESPN and Sports Content. “He has embodied the spirit of the Jimmy V Award for Perseverance his entire career, and his fight against cancer has been no different. He has taken his struggle as an opportunity to help others, to help people to understand the challenges and to remove the stigmas and false assumptions. It’s fitting that we will present this award to him almost 30 years after he stood by Jimmy V’s side on the ESPYS stage, and it is an honor to add Dick to the distinguished list of winners of this award.”

ESPN has done a lot to honor Vitale over the years, including recognizing him with an on-air tribute during the 15th annual fundraising V Week this past December. Here’s that tribute, which includes ESPN personalities speaking about Vitale’s impact and Vitale speaking about how much Valvano meant to him, and why that’s led to his new life mission to raise money for kids battling cancer:

It’s neat to see Vitale now being recognized at the ESPYs, as that show is all about raising awareness and funds for the V Foundation. This is an important cause for Vitale, and it’s cool to see his company honor him this way. Vitale adds to a long list of notable winners of the V Award, including NC State women’s basketball coach Kay Yow in its first year (2007), Rutgers football player Eric LeGrand in 2012, ESPN anchor Stuart Scott in 2014, Turner Sports sideline reporter Craig Sager in 2016, former Buffalo Bills’ QB Jim Kelly in 2018, high school coach Rob Mendez in 2019, and triathlete Chris Nikic last year. And it’s interesting to see Vitale get an award named after someone that meant so much to him.