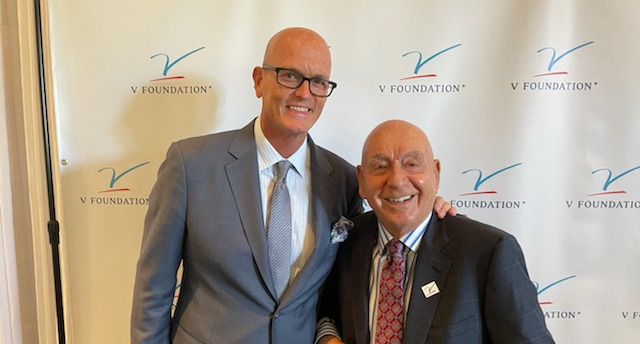 While many people know Dick Vitale for his long-running college basketball commentary on ESPN, what he considers even more important is his work raising money for pediatric cancer research. As Vitale told AA earlier this year, he’s “totally obsessed” with that effort. And the latest expression of that was the 16th annual Dick Vitale Gala, held Friday night in Sarasota, Florida, which saw Vitale raise $6.5 million, even more than the $5 million target he set. Here’s more on that from Doug Fernandes of The Sarasota Herald-Tribune:

But with the pandemic forcing many to tighten their purse strings, and with reduced attendance at this year’s Gala cutting deep into the event’s bottom line — a table of eight cost $10,000 — Vitale had no choice but to turn up the heat.

In tears, he said he was sorry.

“Begging and pleading for dollars because of the pandemic,” Vitale said. “I want to apologize to so many people.” He referred to a note he had gotten from a parent — “Please keep doing what you’re doing,” it read. “Because I don’t want to be one of the moms and dads putting on a suit and going to a funeral for my child.”

“The stories I hear,” Vitale said. “A lot of people just don’t get it. They don’t understand (cancer in children) hits home and it’s brutal what it does. People constantly praise me like they did here. I don’t deserve that praise.”

One of this year’s featured honorees was Vitale’s ESPN colleague Scott Van Pelt (seen above at the event with Vitale). He had quite the comments about the event and Vitale to Fernandes:

“He’s one of one,” he said. “There’s no one like that man. A lot of you, myself included, got to know him because of basketball. But his legacy in the world is not basketball. It’s this. It’s this night. It’s his singular passion.

“I have no idea what I’m being honored for. I don’t feel worthy, but I feel moved and honored to be here and to lend my voice, my time and my support to this cause. Five million bucks. That’s what Dick wants to get and I’m here to do anything I can to make sure that number starts with the five.”

A lot of what we cover in the world of sports is pretty silly overall, but there are also things that do actually make a huge difference. And Vitale’s galas, which have now raised more than $44 million total towards pediatric cancer research, certainly seem to fall in that category. It’s cool to see that these are still happening, and that they’re making a difference. And they’re also providing a cool opportunity for some kids who are survivors, as with Vitale’s All-Courageous Team: 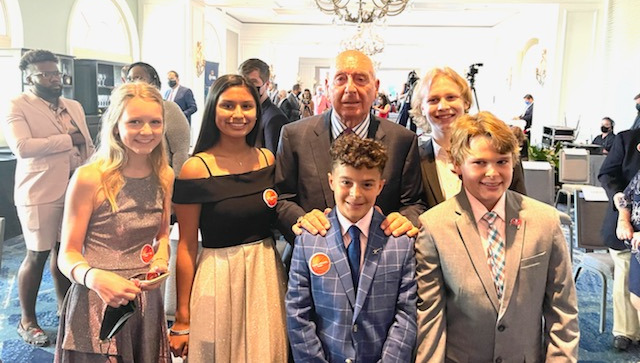 Here’s a statement Vitale sent AA on this year’s event:

“I am in absolute awe of all the people that responded in such a positive manner to assist us in raising $6.5 million for kids battling cancer . A big thanks to Mary Kenealy and Janet Allen for doing an amazing job, since they had to deal with many regulations due to the pandemic. Also a thank you to Shane Jacobson, our new CEO, who has really been very positive in his desire to get us funding from corporate and university groups for pediatric cancer research.”

“Now a genuine super thanks to all those that joined our team and donated $100 or more . Every dollar makes a difference, but I must give my sincerest thanks to those that went way beyond. Every championship team needs role players to win and also must have stars. Yes, my national championship team consisted of fabulous role players, and I had several superstars in Mark Pentecost and Mat Ishbia. Mark and his wife Cindy have annually been flat out solid gold superstars, as they have been so generous with 7 figure donations for several years, with Mark the founder and CEO of IT Works. Joining us this year was Mat Ishbia, a corporate leader who has taken United Wholesale Mortgage to great heights, who joined the 7 figure club in donating.”

“Also major six figure donors such as Constellations, Jeff Vinik and the Lightning, Buster Posey, Craig and Joellen Mettille, Dan Doyle, Derek Thompson, WWE-Stephanie McMahon, Cody Foster, University of Florida Pediatric Research, and Richard Wahl.  Yes, I am in awe of the way all the people have assisted us at The V Foundation with our goals to provide funding for pediatric cancer research! Love all that are on our team! Let’s start the ball rolling for May 6, 2022 & our 17th Annual Gala. Remember, you can donate at dickvitale.com.”

These events are doing a lot to raise the profile of pediatric cancer research, and to raise money for that research. And it’s cool to see that this is such a continued passion for Vitale. There’s a lot of good that’s coming from this, and it’s nice to see such a prominent sports figure continue to be so invested in an important charitable cause.