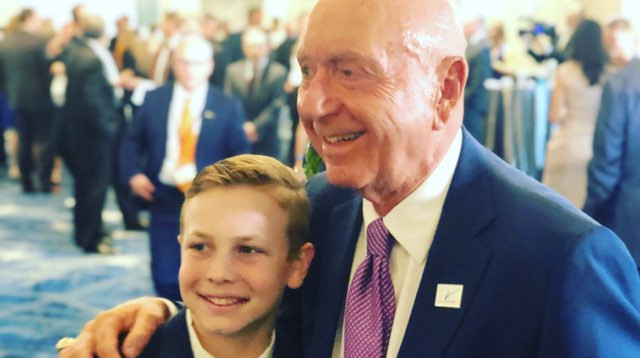 ESPN college basketball analyst Dick Vitale is known for many things; his 1963-79 coaching career, his four decades and counting as a prominent ESPN analyst, his passion for concerts and Tampa sports (particularly relevant at the moment ahead of Sunday’s Super Bowl LV), and his long–running efforts to raise money for pediatric cancer research. Vitale’s latest endeavors on that front include his 15th annual Dick Vitale “Passion For Pediatrics” Gala last September (held virtually, it raised a record $7.4 million for the V Foundation, bringing that total to more than $37 million over 15 years), his upcoming 16th annual gala (planned for this May), and his repeated donations of all of his proceeds from his books (most recently including “The Lost Season”). Vitale recently spoke to AA about his charitable work, and he said that’s what he cares about most at this point in his life (he’ll be 82 in June).

“I’m totally obsessed with raising dollars for kids battling cancer. My life is now in its final chapter, and the people who have been so good to me over the years, fans, ESPN, all the people I’ve worked with over 42 years, that’s half of my life now with ESPN. I’ve had a lot of success and a lot of honors have come my way, Hall of Fames and broadcasting and basketball and various others. I just feel that at this state of my life, I want to give back. I love young kids, I love young people.”

Vitale said a personal connection with one family that really sparked this cause for him.

“For me, really when I got obsessed about [pediatric cancer research] was that we had a neighbor here, a beautiful young girl named Payton Wright, who lost her life to cancer. (Vitale wrote about her for ESPN.com.) That was about 15 years ago. This is going to be the 15th year of my gala, and one of my first galas was dedicated to Payton and raised a million dollars to battle the kind of cancer [medulloepithelioma, a rare type of brain cancer] that she lost her life to. When I went to the funeral, I was emotionally a wreck, watching the mom and dad. They were in their 30s with three beautiful kids, a great life, and all of a sudden, bam.”

Wright’s cancer began with just knee pain, but it spread to her spine and her brain. Vitale said watching her battle convinced him he needed to raise money for research to help others.

“I watched that little girl become paralyzed, I watched her become blind, I watched her lose her life. It just tore my heart out. And I vowed that I would start doing things for kids.” 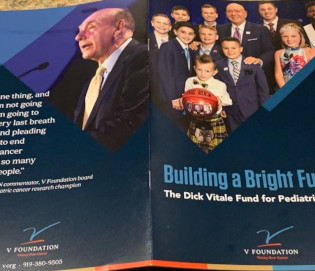 “The first guy I called up was [Duke coach] Mike Krzyzewski, we had a gala, we raised a million dollars. That was my first big gala. And since then, so far, we’ve raised $37 million. And this year we have our gala on May 7; last year was virtual, raising money virtually, and there are so many people supporting us, we raised more than $7 million virtually last year. And all this money from the books goes into that pot and goes toward that goal. I’ll be honest with you: my team that I work with is so dedicated to this, my wife, my daughters, Mary Kenealy Events, they run all the different things I do, they do a phenomenal job. We work 24/7 at it, we really do. It is constant, constant, and we get great support; Mark Cuban came up big for us, the WWE with Stephanie McMahon and her people came up big for us.”

Vitale said it’s crucially important to hold pediatric cancer-specific fundraisers, as pediatric cancers tend to get much less funding from general cancer funding pots. And he said he thinks there are countless inspiring stories from kids fighting cancer.

“Kids, that’s our future. I know these families so well, I get to know them on a consistent basis, we have Dickie V’s Courageous Kids. I’ve got one, a neighbor right now, Weston Hermann, he’s in his fourth battle. He’s 13 years old and he was doing great, and all of a sudden, he came down again when he went for his quarterly checkup, they said the cancer came back to his brain. He’s in his fourth battle with brain cancer at 13, and they have to do 52 weeks now of chemotherapy. The kid is a fantastic, not good, fantastic hockey player, plays with all the older kids.”

“When I got to meet them, I was in a restaurant, my wife and I, a couple years ago. This couple comes walking in and said ‘We hate to bother you, we wanted to just come over and just thank you for what you’re doing, raising money for kids, because we’re living it, and our son Weston has brain cancer.’ So I said ‘Why don’t you come out here and join us for dinner?’ And they did, and after about an hour or so, the dad shows me a video of his son playing hockey, and oh my God, the skill at 10 years old!”

“So I got in a call to a very good friend, Jon Cooper, who’s the head coach of the Lightning. He’s just a great guy. So I get him on the phone and I say ‘Jon, I need a favor, any chance, any chance you can send me a beautiful Lightning shirt with his name on the back and number one?’ And Jon is such a terrific guy, he says ‘Come on, Dick, jersey? Let the kid come up and skate with us!'”

“He’s 13 now, he’s an eighth-grader, and he’s been doing his chemotherapy for a couple of months. And after he comes out of chemo, he goes to the doctor and goes ‘I’m playing hockey tonight.’ …His dad calls me up and tells me ‘Weston right now is throwing up all over.’ And I didn’t know what to say, to be honest with you; he wants to be a normal kid. And he goes out and plays and scores three goals and two assists! He’s such a beautiful kid.”

Cooper has done a lot on the pediatric research front himself, including starting an annual “Coop’s Catch for Kids” fundraiser back in 2016. In 2018, at that third fundraiser, Nick Kelly wrote about it in The Tampa Bay Times, and about the part Vitale played in helping to get it rolling:

Said Vitale, “You know he can coach, but he is a quality human being. He cares about giving back.”

That became clear when Vitale and Cooper met a few years ago at one of Vitale’s annual galas. Cooper called Vitale shortly after. He wanted to do something like that and asked if Vitale could speak at it.

Vitale said yes and has said yes each year.

“I come here because I know what he’s doing,” Vitale said. “He’s helping kids. To me, there’s nothing greater in life than if you can bring a smile to someone’s face.”

…Not long after, Hermann took part in a Lightning morning skate. He was also the star of last year’s Coop’s Catch. Now closing in on a year in remission, Hermann was a featured guest again this year.

So those two Tampa figures have certainly made a difference for a lot of kids, including Hermann. And Vitale’s committed to continuing to try to make a difference for kids across the U.S., and that’s what keeps him writing and keeps him selling these books through his site so he can keep sending donations.

“You go to DickVitaleOnline.com and get autographed copies, and every dollar I would make off those books, every dollar, goes to kids.” 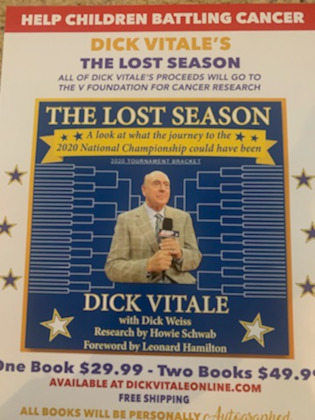 He said this latest one, The Lost Season, was particularly fun for a chance to work through hypotheticals for last year’s canceled NCAA tournament with two long-time collaborators, Dick “Hoops” Weiss (a 2018 NSMA Hall of Fame inductee) and researcher Howie Schwab (of “Stump The Schwab” fame).

“I’ve done a number of books with Hoops Weiss, and he’s just such a guru when it comes to college sports. We’ve had a great relationship over the years. Howie, I’ve known for years, he’s the research expert. …I love the game so much and it’s given me such an incredible life, and when we found out there wasn’t going to be a NCAA tournament, we thought ‘Why don’t we do a book about the lost season?’ They all agreed, and it was like therapy, talking about what could have been or what might have happened.”

The 2020-21 college basketball season isn’t lost (yet), but it has seen lots of postponements and cancellations over COVID-19, and it has seen major changes for even the played games, including few to no fans at games and announcers like Vitale working from home. Vitale said he certainly misses the energy of a packed arena and the chance to connect with people there, but he said those challenges are miniscule compared to what many are dealing with.

“People wonder why I’m so obsessed, and I tell them ‘I’ve spoken at several funerals.’ I’ve spoken all over the country through the Washington Speakers Bureau for many years, corporate lineups, black-tie events, political banquets, you name it. The toughest speech ever, ever, is when a parent asks you to speak at a funeral for their child. …[Raising money to help sick kids] is not just a one-time thing, it’s the story of my life now.”

[The Lost Season is available through Vitale’s website. All photos here supplied by Vitale.]