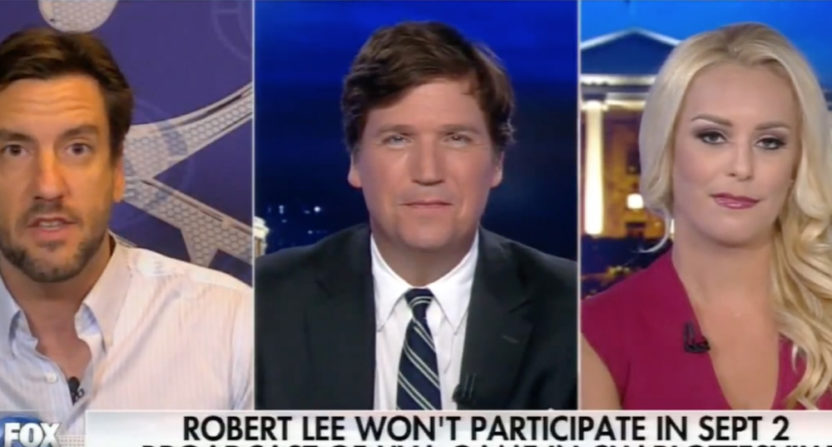 It’s far from new to see Clay Travis taking shots at ESPN, something he did even before joining Fox in 2013 and continued while his Outkick The Coverage site was affiliated with them (it hasn’t been since July; Travis is still a host on the Fox Sports Radio brand, but that’s run by Premiere Networks, and that’s his only current tie to Fox).

However, the Travis-ESPN feud has ramped up considerably of late and it’s gaining attention well outside of sports media circles, especially after Travis broke the news of ESPN reassigning announcer Robert Lee and then went on Fox News and CNN to criticize the move and say it proved ESPN was a “far left-wing network.”

A regular response to stories we’ve written about Travis over the years was “Who is Clay Travis?”; that’s not the case recently, with publications from The Daily Beast to Uproxx to Slate discussing the Travis-Lee story and its continuing fallout in detail and high-profile ESPN figures either directly or indirectly blasting Travis. And that’s before you get to the conservative media outlets discussing Travis’ latest ESPN takes, from Breitbart to Fox News. Or the amounts of attention Travis gets on Twitter for anything he posts about ESPN.

Travis’ criticisms of ESPN have always received some attention, but that seems to have gone to a whole new level following the Lee saga, and it’s carried this discussion from the sports media realm to the general sports realm. If you’re among those hoping such fodder fizzles out, it seems highly unlikely that Travis’ criticisms of ESPN are going to diminish any time soon nor will the attention his comments receive.

For Travis, there appear to be good business reasons for regularly going after ESPN. ESPN VP (corporate communications) Mike Soltys told Robert Silverman of The Daily Beast “We looked at one point, and over a two-month period, half of his top 10 most trafficked stories were critical of ESPN and most of them talked about our alleged liberal bias.” Travis didn’t respond to The Daily Beast’s questions about if that stat was true, but from the outside, his ESPN coverage certainly appears to draw plenty of social engagement and outside media attention.

There are a lot of people who want to read about ESPN’s supposed left-wing agenda, and many of them turn to Travis for that. And he’s even made his anti-ESPN campaign into merchandising, selling MSESPN shirts with a no symbol as part of his new Outkick VIP subscription service.

That Outkick VIP package is interesting here, as it’s more proof of Travis expanding beyond just a sports personality with a website and becoming someone who can really sell things to his followers. We’ve seen some efforts along those lines before, such as his lawyer referral service Outkick.law (which doesn’t seem to exist any more, but a cached version can be found here) or his legal continuing education courses through OutkickCLE.com, or his store of Outkick gear, or the $50,000 he lost on an attempt to sell SEC-colored pants (really), but the VIP package is particularly geared towards getting readers to engage with him more and more; it includes scheduled events with Travis in markets around the country, Travis’ gambling picks, further gambling insights from Todd Fuhrman, personal profiles, and message boards.

This focus on really boosting his personal brand isn’t new for Travis, but it’s ramping up lately, especially with the VIP subscriptions. And it’s notable in light of Silverman’s headline calling Travis “the Alex Jones of sports“. There are plenty of differences between Jones and Travis when it comes to politics, but Travis’ attempts to really build his own brand through non-conventional media channels, while directly engaging with readers and selling them products and subscriptions, sound like a lot of what’s been said about Jones.

And one of Travis’ most compelling brands is “the critic of liberal ESPN.” That’s something that’s not only brought him a lot of attention, but a lot of engaged and devoted followers. There are many who like the narrative of the little guy taking on the big company, too, and who support Travis for doing so. And there are many who don’t like ESPN, so if Travis can be an alternative to it in some ways (something FS1 has mostly failed at), that gets him fans too. So don’t expect him to turn away from that path any time soon.

The challenge for ESPN is that there really isn’t any way to respond to this. They tried essentially ignoring Travis (and others claiming they’re left-wing, such as Travis’ former FS1 colleague Jason Whitlock) for a long time, but it didn’t make those criticisms go away. They’ve tried various refutations of those points, whether from ESPN executives or surveys. Numerous ESPN on-air personalities have blasted the “left-wing” narrative, but it hasn’t stopped it. And even a fiery e-mail from ESPN senior vice president (corporate communications) Chris LaPlaca complaining about how Travis portrayed an “Africans Abroad” segment that only aired in Africa just led to Travis posting that on Twitter, and continuing the feud there.

It seems unlikely any conceivable approach from ESPN will stop Travis’ criticisms. Even if they did have a case to complain about certain things he’s doing (like selling those “MSESPN” shirts), that would probably bring Travis more attention, and cause ESPN more harm than good. And even if they went and hired a bunch of right-wing figures (for what it’s worth, they did just extend Will Cain, and they’re even bringing Hank Williams Jr. back), it seems improbable that ends the “MSESPN” talk. The growing reality is that there are a lot of people who hate ESPN, and who regularly want to read pieces or listen to discussions on how it’s too liberal, and Travis is probably the leading provider of that content at the moment.

Nothing ESPN can do will stop the criticism from Travis and others entirely. Their best hope is probably just to avoid particular flashpoints like the Lee reassignment that give these criticisms wider attention. And it’s possible that they’ll be able to avoid some. But there will still undoubtedly be some decisions that draw controversy, and sports fans can likely expect to hear Travis and others blasting liberal ESPN over those moves and more for quite a while to come.