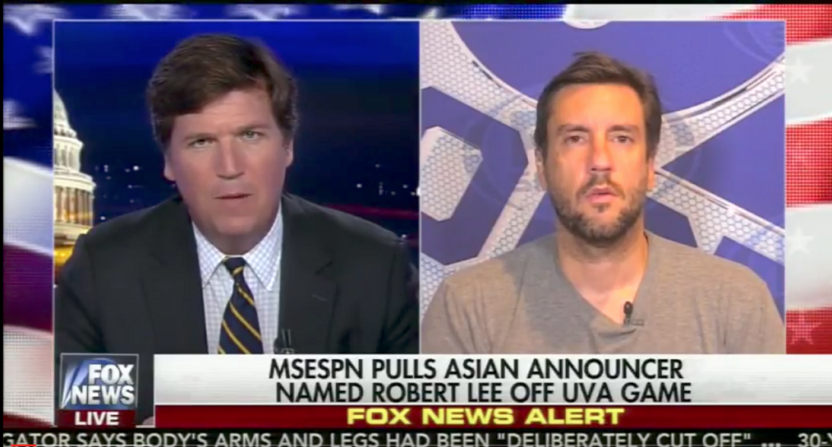 Coverage of the events in Charlottesville have dominated the national news of late and for the most part, sports hasn’t been a large part of that national coverage. That changed tonight, as news broke that ESPN has pulled play-by-play broadcaster Robert Lee from calling Virginia’s season opener against William & Mary.

ESPN issued the following statement on the personel change:

“We collectively made the decision with Robert to switch games as the tragic events in Charlottesville were unfolding, simply because of the coincidence of his name. In that moment it felt right to all parties. It’s a shame that this is even a topic of conversation and we regret that who calls play by play for a football game has become an issue,”

The news was originally broken by Outkick the Coverage and was later confirmed by ESPN in the statement above. Clay Travis, who wrote the original story for OTC, said he spoke with a senior employee at ESPN who made it clear this wasn’t a demand from anyone, and that it instead was a personnel decision and switch.

The decision at first didn’t seem to be a big story given the low profile nature of Lee within ESPN’s talent ranks and the low interest in the game, which would air regionally and involved a sub-bowl division team.

Travis then appeared on Fox News to discuss the news, and in the hours since, the personnel change has become major news, particularly for conservative-leaning news outlets.

Fox News oddly went to air with ESPN labeled as “MSESPN,” a regular nickname Travis calls ESPN when commenting on the network’s perceived political leanings. I’m guessing they just used what was in Travis’s article, but who in cable doesn’t know what ESPN’s name is?

While ESPN is taking a lot of bad publicity here, let’s be honest in that they found themselves in a tough situation here. If Lee did broadcast the game, some viewers would likely have taken offense to the one-in-a-100,000 coincidence. The network clearly opted to try to avoid that situation by quietly moving him to another game, except that the move leaked out and now they’re dealing with this worst possible scenario of another news story that allows conservatives to shake their fist at the sports network.

Richard Deitsch also reported that Lee was actually involved in the decision and was supportive of it.

Company spokesperson Keri Potts says they did not mandate that Robert Lee change his assignment.

Company says that Lee (a young broadcaster who works for ESPN3) was more comfortable not doing this assignment.

I requested an interview Robert Lee. ESPN says he's not talking at the moment. (Young guy. Can honesty understand why here.)

While ESPN is taking it in the teeth right now, it’s not hard to imagine keeping Lee on the game would have drawn similar backlash, but from the other side of the political news spectrum. If Lee preferred being moved off of the game, this probably isn’t worthy of the attention it’s currently getting. Most broadcast teams aren’t publicly announced as assigned to specific games until days before games, especially when they are as small as UVA against William and Mary. No offense to either school or football program, but UVA vs. W&M isn’t exactly Alabama vs. Florida State.

Ultimately, it boiled down to ESPN having to pick between two options, neither of which were good. You have to imagine they’re not thrilled with this being leaked out and having to be on Defcon 1 on the PR front, as they again have to deflect criticism about their political leanings. Depending on your political leanings, this could be another damning example of ESPN catering to a progressive liberal agenda, or perhaps them shrewdly looking to avoid what could be viewed as an insensitive and obtuse slight in the wake of an upsetting current event. People will likely be passionately divided on how significant the move is, because simply we live in times where we seem to be passionately divided on all things, and now that extends to a previously unknown announcer getting switched from one shitty football game to another.

UPDATE: New York Magazine’s Yashar Ali tweeted out an email from an ESPN executive with a statement on the Robert Lee controversy.

Just received this email from an ESPN executive re the Robert Lee controversy. pic.twitter.com/OuBORlWO9f

The NCAA continues to blame the messengers and the messaging without looking at the message itself.

Boomer Esiason revealed on-air Tuesday that he was interviewed for a forthcoming HBO documentary on the fall of his longtime WFAN partner.

The NCAA continues to blame the messengers and the messaging without looking at the message itself.

Boomer Esiason revealed on-air Tuesday that he was interviewed for a forthcoming HBO documentary on the fall of his longtime WFAN partner.