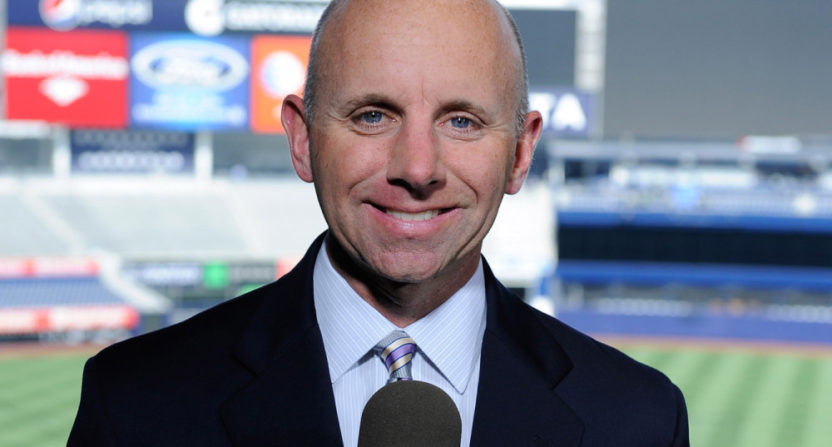 The idea of ESPN being overtly political and overtly liberal has received a lot of attention in recent years, especially following a 2015 ESPY award for Caitlyn Jenner (a registered Republican, by the way). Many critics, particularly Clay Travis and Jason Whitlock, have blamed all sorts of ESPN business struggles on the company’s supposed political slant, sparking angry responses and commissioned surveys from Bristol. But it’s interesting that many prominent people inside ESPN don’t think there’s any sort of corporate political slant or political pressure.

Jeremy Schaap and Bob Ley made comments along those lines in May, with Schaap saying “I don’t think that’s true in any way, shape or form” when asked if ESPN’s financial issues had anything to do with politics. Now, Monday Night Football announcer Sean McDonough has discussed how he’s never heard ESPN executives say anything about politics (other than seminar suggestions of politics as a subject to mostly avoid), and how this idea of ESPN pushing for left-wing political commentary strikes him as “a bunch of nonsense.”

Bennett asks “I wonder as a broadcaster who has convictions, who cares about certain political aspects, do you fight with the balance of wanting to use your platform, if that’s the right way to describe it, to touch on certain topics, with the other side of just wanting to call a ballgame and offer that outlet, as you called it?”

McDonough responds “Yeah, I know there’s been a lot of attention in recent years about ESPN and the supposed political leanings of the company or the network. You know, I’ve been there for a long time and I have never been involved in any one conversation with any management person about it. Other than seminars when they’ve told us that generally good topics to stay away from are religion, politics, whatever it might be. I think most of us, you don’t want to use profanity. It’s just things that are common sense. And to me, I don’t think…people tune in to watch the game, and I think we should just stay with the game.”

“Now, if there’s somebody in the game whose wife just got elected as the mayor of some big city or something, I think it’s fine. That’s not really delving into the political world; it’s a legitimate, pertinent topic that pertains to someone in the game. But I just never go there, and I don’t think it’s my place to go there. And I don’t think people who watch Monday Night Football want to know what I think about immigration, or tax reform, or whatever the case may be. I just think it’s out of place.”

“But I do think the whole notion of somehow ESPN is handing down directives to those of us on the air about what our political thoughts ought to be, that’s a bunch of nonsense. No one’s ever told me ‘You need to be liberal, you need to be conservative, you need to be a moderate,’ whatever. What they would prefer is that we keep it to ourselves for the most part. And I understand that and I’m totally comfortable with that.”

McDonough makes a lot of valid points there, and he particularly illustrates the problem with the idea of painting ESPN as an inherently and thoroughly liberal organization. It’s worth remembering that ESPN is a giant company, and one that does a lot of different things. Much of its content is game coverage, and it’s hard to criticize most of that as really political in one direction or the other.

There are moments where game coverage gets controversial, especially around discussion of situations where athletes have been accused of domestic violence (Bennett and McDonough discuss the Brent Musburger-Joe Mixon one, and McDonough’s own approach to calling Mixon’s games, immediately after their politics conversation), but that’s more of a social issue than an explicitly political one, and even the recent anthem protests have mostly just been noted rather than debated or analyzed during games. And the furthest an ESPN game broadcast ventured into actual politics recently may have been Win Butler’s mention of healthcare and the upcoming U.S. election at the 2016 NBA celebrity all-star game, which prompted Sage Steele to quickly cut him off and say “We’re talking about celebrity stuff, not politics.”

Of course, there has been more discussion of political and social issues on other ESPN broadcasts, especially during the ESPYs and occasionally on certain studio shows. And some of that discussion has been straightforward opposition to certain right-wing initiatives like North Carolina’s HB2 bathroom bill, and some of it’s been individual hosts and analysts expressing criticisms of particular politicians like President Donald Trump. It can even be argued that ESPN’s studio shows as a whole currently air more left-wing than right-wing opinions.

However, that’s probably a function of ESPN’s on-air talent becoming younger, more female, and more multicultural (groups where the current president is polling lower than he does with white men) rather than any specific mandate, and it should be noted that ESPN airs some views very supportive of the current administration as well, especially from Will Cain about Kevin Durant and the White House. But even if you add it all up, there isn’t a ton of political discussion of any sort on ESPN. There’s some on studio shows, especially when the sports world touches on political issues, but it’s far from constant and far from daily.

What about behind-the-scenes moves? The latest accusation of ESPN’s liberal bias is the reassignment of announcer Robert Lee from one barely-viewed streaming-only game to another one, which led to Fox News appearances from Travis and McHenry to bash “MSESPN” (as Travis calls it), but that’s been criticized from the left as well and has been described by the company as a decision made to avoid memes and mockery.

As per hiring and retention, it seems highly unlikely McHenry lost her job because of her conservative beliefs (she was part of a wide wave of NFL cuts, and ESPN stuck with her through the video of her ranting at a parking-lot attendant, which seems like a much bigger issue than her being conservative), and Dan Le Batard recently made the argument that ESPN’s more likely to hire conservatives now due to the perception of their company being liberal. That makes some sense, especially considering executives’ recent praise for Cain’s “different and provocative” point of view (he’s long been an outspoken conservative, and was a political writer and TV host before joining ESPN). It doesn’t mean ESPN’s constantly leaning left or right; it does mean they probably want on-air personalities from both of those sides.

Overall, McDonough’s comments go to show how silly the “ESPN is so liberal” narrative is when applied to the whole company. Yes, there are liberal viewpoints sometimes expressed on ESPN, and perhaps more frequently than conservative ones. But so much of the company’s programming, and the game broadcasts in particular, have nothing to do with politics. And suggesting that ESPN executives want their on-air people leaning left is especially absurd; they seem more sick of the “liberal ESPN” narrative than anyone, and more eager to avoid it. The overall summation of ESPN’s politics feels much closer to what McDonough says here; “What they would prefer is that we keep it to ourselves for the most part.” That sounds about right, even if it doesn’t fit with the critics’ narrative.