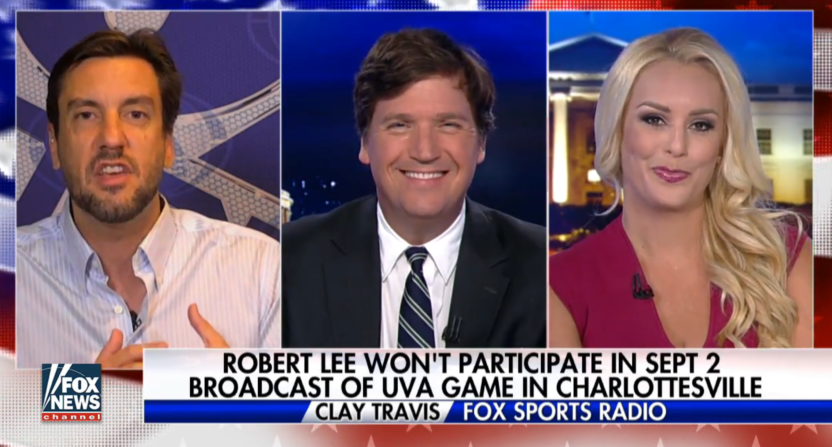 A simple assignment switch for a little-known play-by-play broadcaster has become a major headache for ESPN.

ESPN took flak Tuesday for moving a broadcaster named Robert Lee off a Virginia-William & Mary football game in Charlottesville, days after explosive clashes over the town’s decision to remove a statue of Confederate general Robert E. Lee. Critics claimed the network’s decision was an example of excessive political correctness, while others viewed it as an innocent attempt to dodge social-media mockery of the bizarre coincidence.

Well, we gained some insight into ESPN’s thinking Wednesday, thanks to an internal company memo obtained by CNN’s Brian Stelter. In the memo, ESPN president John Skipper says the network was not concerned about offending anyone and was instead worried Lee’s name might “create a distraction, or even worse, expose him to social hectoring or trolling.” He said the decision was made after consulting with Lee, who was also worried about the reaction and preferred to call the Pittsburgh-Youngstown State game he was eventually switched to.

Skipper also took a not-so-veiled shot at longtime ESPN antagonist Clay Travis, who broke the story about Lee switching assignments on his website, Outkick the Coverage. Travis portrayed the story as an example of ESPN’s chronic fear of offending over-sensitive viewers and said the network was seeking to “avoid offending idiots.” Skipper, in his memo, wrote that he was “disappointed that the good intentions of our Charlotte colleagues have been hijacked by someone with a personal agenda.”

Travis promptly appeared on Fox News’ Tucker Carlson Tonight, where he criticized ESPN for having an agenda:

“This is the problem with ESPN and their leadership. They talk to us like we’re a bunch of idiots and imbeciles and sell us crap and expect us to see it and think, ‘Oh my god, how lucky we are that ESPN is treating us this way.’

“This is not true. This is a lie. … ESPN is the most powerful sports media company in the world. If they come to an employee, who might make $75,000 a year and rarely ever gets to call college football games, and they say, ‘Hey, we’re a little bit concerned because you have the same name as Robert E. Lee in Charlottesville, do you really believe the guy making $75,000 a year makes the decision about whether he’s going to call the game?”

Travis tweeted that he “lobotomized” Skipper in the segment.

Hey @espn, if John Skipper, your president, isn't on Twitter please let him know I just lobotomized him live on @foxnews. Video coming.

It seems a bit silly that so many people have such strong opinions about this without hearing from Robert Lee himself. Is it so hard to believe that the guy would prefer to quietly call a Pittsburgh-Youngstown State game rather than risk a barrage of memes if he worked the game in Charlottesville (given that he didn’t know the decision to switch his assignment would become public)? As Travis says, it seems absurd that ESPN would fear offending viewers so much that they’d pull Robert Lee off a game in Charlottesville. So might it be that there was, in fact, a gentler motive?

Whether or not ESPN had any sort of nefarious intention in moving Lee off the Virginia game, this whole controversy does demonstrate just how distrustful some viewers are of the network. To Travis and many others, it’s absolutely impossible that ESPN made this decision to protect an employee and instead incontrovertible fact that it sought only to serve some sinister agenda.