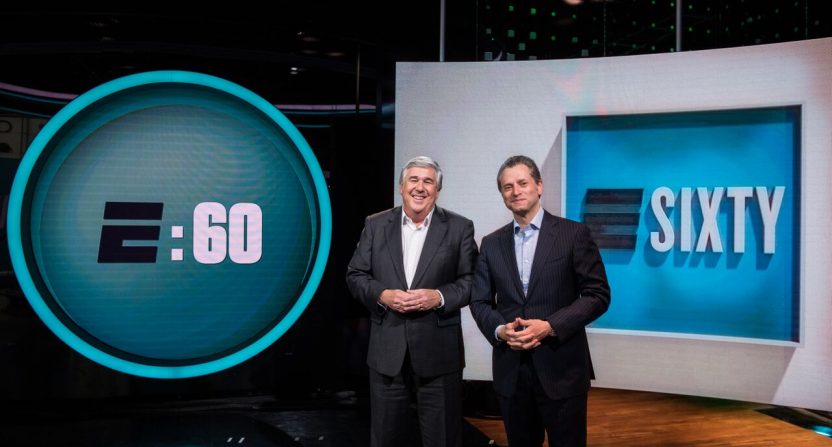 With ESPN’s recent layoffs and ongoing operating income declines, many have made the argument that their struggles are because they’ve “become too political” (which really seems to mean “they’ve become too liberal”).

That line has been advanced by a number of competitors in particular, with Fox’s Jason Whitlock and Clay Travis especially going in on it (Whitlock in an op-ed for fellow Rupert Murdoch company The Wall Street Journal that somehow managed to blame ESPN’s so-called political shift on Deadspin, Travis on his own site), it’s provoked polls saying that Republican voters’ satisfaction with ESPN has plummeted, and it’s been disputed by Disney CEO Bob Iger, but it’s still driving much of the conversation.

However, veteran ESPN presences Bob Ley and Jeremy Schaap don’t think it should be.

Schaap and Ley are doing a bit of a media tour to promote their work together on the new permanent E:60 (Sundays at 9 a.m. Eastern) as well as on Friday episodes of Outside The Lines. They spoke to our Matt Yoder earlier this week about ESPN layoffs, journalism and storytelling, and covered some similar topics with For The Win’s Nina Mandell in a piece published Friday, but went further on one front there, directly addressing those criticisms of ESPN being “too political” and taking on Whitlock specifically:

As for the theories (especially from Twitter trolls) that ESPN’s trouble came from politics?

“I don’t think that’s true in any way, shape or form,” said Schaap. “I don’t think there’s any data to support it. I know that it’s a narrative out there. I saw Jason Whitlock wrote an op-ed in the Wall Street Journal about it. But I don’t buy it. I know we are living in a time where things are being politicized in sports in a way that they haven’t been. And that’s not caused by ESPN, that’s what we’re seeing.”

He pointed to Colin Kaepernick’s protests and NBA players wearing ‘I can’t breathe’ shirts as examples.

“I can’t imagine people are cancelling their cable because we’re covering news stories,” he said.

“So anybody who talks the narrative that there’s a political bias and that leads to business difficulties, I think that shows what political view they’re coming from,” he said.

Ley and Schaap seem largely right here. The primary issues for ESPN are exploding rights fees (which have nothing to do with any political views expressed on-air) and declining subscribers. The subscriber issue could potentially be about politics, but appears to be more about cord-cutting in general and how many people are abandoning full-price cable packages.

Yes, if someone doesn’t like what ESPN is doing, that might be a factor in their decision to abandon cable altogether if they might not otherwise, but it’s probably not the biggest factor for most of this subscriber loss. It’s also worth noting that it’s not possible to unsubscribe from ESPN directly in most cable bundles, given its placement (usually on the expanded basic tier), and that many might be also giving up right-wing channels like Fox News if they did axe ESPN.

Now, there’s no question that some people are unhappy with ESPN’s perceived left-wing slant (as that above poll suggests), and there’s also no question that ESPN’s policies on politics have changed, from “No politics” (which was never fully enforced to begin with) to “commentary is okay if you’re not in hard news, especially when politics impact sport.” It’s also not in dispute that it’s much harder to have political “neutrality” these days, given the polarization of America and the constant intersections of politics and sports.

ESPN’s corporate approach can be disagreed with, as can their individual personalities’ politics, and some who disagree may wind up cancelling cable (or taking smaller but still significant actions, such as watching less ESPN, reading their site less, using their app less and so on). But Schaap is right that there’s no data we’ve yet seen to support politics being a major factor in any of ESPN’s current struggles.

Ley’s point of “no nefarious plot” is also interesting. The “no nefarious plot” comments seem accurate; it’s really hard to imagine ESPN intentionally setting out a corporate-level plan to go left or cover politics more, knowing it would alienate a lot of people. They’re a bottom-line oriented division of a bottom-line oriented company, and as Michael Jordan may or may not have said specifically, “Republicans buy shoes too.”

But commenting on sports in 2017 is going to lead to somewhat-political comments one way or the other, especially when it comes to issues seemingly centered around politics such as Colin Kaepernick’s anthem protests and subsequent inability to find a job, or NCAA action against North Carolina over anti-trans legislation.

It should also be noted, as many debating Hamlet have discussed, that inaction can be action in its own way. Similarly, not covering the political aspects of an event can itself be a political statement (in particular, if it comes to implying that something controversial is not, or that something is not news; for example, not covering Kaepernick’s protest at all would also seem political). So even without a plot, ESPN (and every media outlet) probably winds up being at least somewhat political to one side or another. And there is a case to be made that the sum total of comments by all ESPN personalities on all platforms may swing more liberal than conservative (it certainly doesn’t mean there aren’t conservative ones too, though).

But this political slant, real or imagined, isn’t necessarily a major factor in ESPN’s struggles, as Ley and Schaap point out. And repeatedly insisting that it is without providing evidence probably says more about the critic than the target of their critique.