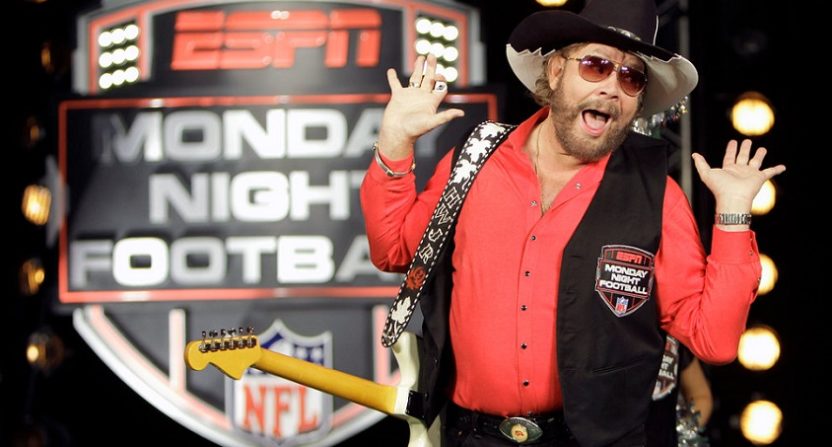 If you’ve been thinking that something’s been missing from ESPN’s Monday Night Football telecast over the past six years, the network agrees with you. Ron Jaworski in the booth? Better games on the schedule? Or Hank Williams Jr.’s theme song?

ESPN apparently thinks it’s the latter. As reported by USA Today, the network is bringing back Hank Williams Jr. and his “All My Rowdy Friends Are Here on Monday Night” opening theme for this season of Monday Night Football. The theme will make its return for the Sept. 11 season opening telecast between the New Orleans Saints and Minnesota Vikings.

Williams Jr.’s theme, based on his song “All My Rowdy Friends Are Coming Over Tonight,” was added to Monday Night Football in 1989, the 20th anniversary season of the program. The theme had been a signature part of the MNF telecast for the next 20-plus years, with lyrics tailored to that week’s matchup.

With a theme song making the game feel like an event, other networks have added opening themes to their own broadcasts, such as “Waiting All Day for Sunday Night” performed by Faith Hill, then Carrie Underwood, for NBC’s Sunday Night Football. Last season, Underwood wrote a new theme for SNF, titled “Oh, Sunday Night.” (Opening themes probably haven’t worked as well for Thursday Night Football, with the likes of Pentatonix and Priyanka Chopra performing.)

But really, none of those themes compare to Hank Williams Jr.’s. Maybe you got sick of the song over the years, or grew tired of seeing Williams at the beginning of the broadcast. But it was a signature theme that signaled Monday Night Football was on, and ESPN apparently wanted to bring that feeling back to the broadcast.

“It was the original,” [Stephanie Druley, ESPN’s senior vice president of events and studio production] told USA Today. “It belongs to Monday Night Football. It really is about returning to what fans know. It’s a Monday night party and that’s what we’re all hoping to get back to.”

What’s intriguing about bringing Williams Jr. back is that ESPN originally let him go in 2011 because of controversial remarks he made about President Barack Obama during an appearance on Fox News’ Fox & Friends program. If you’re not familiar with the incident in question, here is how Richard Sandomir explained it in the New York Times:

The controversy began Monday on “Fox & Friends,” a morning show on the Fox News Channel. Williams criticized Obama, a Democrat, and House Speaker John A. Boehner, Republican of Ohio, for their round of golf over the summer, saying it would be like “Hitler playing golf with Netanyahu,” referring to Benjamin Netanyahu, the Israeli prime minister.

When one of the show’s hosts said he did not understand the analogy, Williams said: “I’m glad you don’t, brother, because a lot of people do. They’re the enemy: Obama! And Biden! Are you kidding? The Three Stooges.”

ESPN has been under criticism over the past year or more for letting liberal politics seep into its programming. Depending on what you choose to believe, that perception has played a role in lowered ratings and decreased revenues. So some will surely look at bringing back Williams Jr. as an attempt to placate those who think ESPN has become too liberal. Or, given Williams  Jr’.s politics and appeal, it’s an overt attempt to reach out to an audience that’s turned away from the network over the past year.

Or maybe it’s just bringing back a catchy theme song. If you were sick of Hank Williams Jr., six years is a pretty long time to get over any weariness toward “All My Rowdy Friends Are Here on Monday Night.”

Williams filmed the new opening this past weekend in Nashville, and the theme will include two additional musicians (of a more contemporary appeal, shall we say) to give a 2017 look to the proceedings. Those acts have yet to be announced (ESPN says they’ll be revealed later in the week) and will be featured in each Monday Night Football opening. Anyone care to take any guesses as to who might be joining ol’ Hank for the MNF opening? He’s not a musician (that we know of), but I’m personally rooting for Jon Gruden to be a part of the opening number.