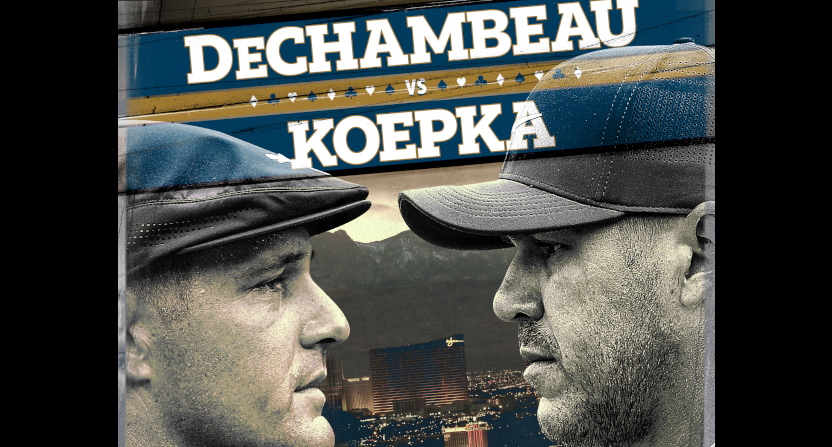 The last two editions of Turner Sports’ The Match have involved teams with one pro golfer and one athlete from outside of golf. The third Match earlier this year saw Phil Mickelson and Tom Brady take on Bryson DeChambeau and Aaron Rodgers, while the second one in 2020 saw Tiger Woods and Peyton Manning versus Mickelson and Brady. However, the first version in 2018 was strictly a one-on-one golf duel between Woods and Mickelson. And Turner’s now returning to that format for the fourth Match, which will air Nov. 26 (the Friday after Thanksgiving, the same date as the first one) on TNT, and which will feature oft–feuding pro golfers Brooks Koepka and Bryson DeChambeau. Here’s more from a release:

TNT will exclusively televise the 12-hole event, to be held the day after Thanksgiving — Friday, Nov. 26, with live coverage beginning at 4 p.m. ET from Wynn Las Vegas, home of top-ranked Wynn Golf Course, the only golf course on the Las Vegas strip. TNT’s presentation of Capital One’s The Match will also be simulcast on TBS, truTV and HLN.

DeChambeau won in his first time competing in Capital One’s The Match — pairing with Aaron Rodgers—this past July, when they topped Phil Mickelson and Tom Brady. Winner of the 2020 U.S. Open and an eight-time winner on the PGA TOUR overall, DeChambeau is currently the No. 7-ranked player in the World.

This will be Koepka’s first appearance as a competitor in Capital One’s The Match, though through his foundation he donated $100,000 to COVID-19 relief efforts during Capital One’s The Match: Champions for Charity in May 2020 in connection with a memorable front-nine birdie from Brady. Koepka also owns eight PGA TOUR titles, including four Major Championship victories over a three-year span: the 2018 and 2019 PGA Championship and 2017 and 2018 U.S. Open.

…Live coverage of the match play event will once again feature unprecedented access with players having open mics throughout the entire competition, including the capability to communicate directly with their competitor and the broadcast commentators.

It’s interesting to see this go back to the golfers-only format, especially as the last two golfer/football player ones have done very well in the ratings. (We don’t really have a good ratings source for the first one, as it was intended as a B/R Live PPV event, but that had so many issues that they wound up making it free.) The second Match in particular averaged 5.8 million viewers, the most ever for a golf event on cable.

But the head-to-head format here makes some sense given the competitors. Woods, Mickelson, and DeChambeau seemed pretty light-hearted when they were playing with football players, and even Woods and Mickelson were ribbing each other in friendly fashion when they went head to head, but there’s a large body of evidence that Koepka and DeChambeau can’t stand each other (which was notable when they were teammates during the U.S.’ recent Ryder Cup win), to the degree of the PGA Tour even coming up with penalties for fans to protect DeChambeau’s feelings about “Brooksy” taunts.

And that rivalry is certainly notable, especially for those who aren’t already hardcore golf fans (which is a lot of the audience for any installment of The Match). And it will be fun to see these two going head-to-head over 12 holes. And that might have been diluted if each of them was paired with a non-golf athlete. This way, it will just be about them. It’s also interesting to have this returning to Vegas (location of the first Match), but at a different course right on the Strip (the first was an 18-hole event at the MGM-owned Shadow Creek Golf Course in North Las Vegas, while the second was at Medalist Golf Club in Hobe Sound, Florida and the third was at Stone Canyon Golf Club near Tucson, Arizona).

Another thing that will be worth keeping an eye on here is what kind of surrounding coverage WarnerMedia comes up with. Several past editions of The Match have featured a large amount of shoulder coverage, including a Range Battles pre-show on Bleacher Report this last time and a different Bleacher Report pre-match show around the second one. The Match is something that’s featured a lot of Turner personalities, from Brian Anderson and Adam Lefkoe through Charles Barkley and Samuel L. Jackson, and it’s been a way for WarnerMedia to bring in a lot of the different things under their umbrella (even if they’re no longer part of AT&T these days, and now merged in with Discovery). We’ll see what they do with this one.