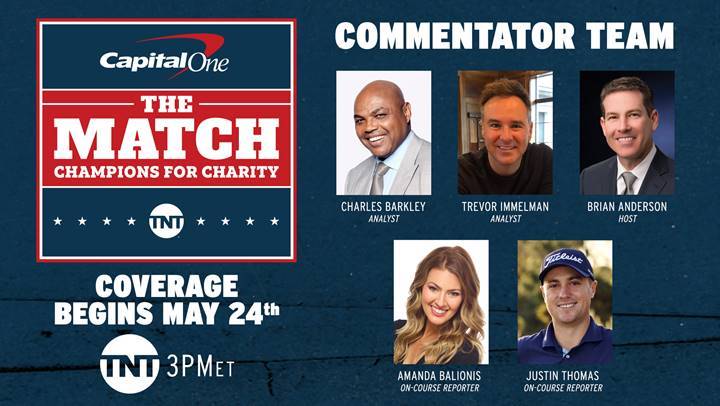 While last weekend’s TaylorMade Driving Relief golf special on NBC had Mike Tirico and his team of analysts broadcast the action away from the course, Sunday’s Turner-produced, star-driven charity golf event this Sunday will have the broadcasters on site.

Capital One’s The Match: Champions for Charity (which we’ll call The Match from here on out) will feature Tiger Woods and Peyton Manning going against Phil Mickelson and Tom Brady with at least $10 million going towards COVID-19 relief. The broadcast will be from 3-8 p.m. eastern from Hobe Sound, Florida on TNT, TBS, TruTV, and HLN and will have Brian Anderson doing play-by-play from Florida along with analysts Charles Barkley and Trevor Immelman, and reporters Amanda Balionis and Justin Thomas.

Like other sports and entertainment events in Florida, including the UFC and WWE, the athletes and broadcasters are going to have to navigate the health and safety issues that come with the coronavirus pandemic. In a phone conversation this week from his Wisconsin home, Anderson told Awful Announcing that he’s received enough assurances that he’s willing to fly down to call The Match.

“We’ve gone through all the safety measures, and I definitely wanted to hear from Turner Sports about what their plan was, and everything I heard was great,” Anderson said. “We’ll certainly exercise all the CDC protocols, and we’ve got a long list of things [to do] when we get there. I feel confident about it, for sure. I appreciate all the hard work they’ve done to try and make this thing happen.”

Anderson said he passed along the measures Turner has planned to good friend who serves as the head of the infection disease division at several hospitals and was given the thumbs up. While he’s enjoyed spending more time with his family than he ever normally would have given his full calendar of events calling baseball and basketball, Anderson is more than ready to get back in the proverbial booth.

“I can’t wait to be able to put something on TV for people to enjoy,” he said.

And that includes his first ever in-person broadcast with Barkley, which he’s excited about.

“I get a front row seat,” Anderson said. “I can’t wait to hear what he has to say, and I’m always entertained by Charles.”

Then there are the golfers themselves, some of the greatest athletes of their generation. They’re all going to be mic’d up and have IFB earpieces, which should lead to some really fun and interesting conversations. Woods and Manning have played a lot of golf together, Anderson said, but seeing how Brady and Manning go outside their comfort zones and how Mickelson and Woods help the two legendary quarterbacks on their golf games is something Anderson can’t wait to see.

“Not to mention the trash talk,” Anderson said. “I’m not so into the trash talk, but it just comes up at events like this. We’ll be ready to hear that. Golf isn’t really a trash talk sport, but these kinds of events kind of lend more to that, more like with your buddies on the golf course.”

Last Sunday’s NBC broadcast was criticized by my AA colleague Jay Rigdon for being overproduced and perhaps not focusing on the actual golf enough, but Anderson said he was impressed that the network was able to pull the telecast off altogether.

“Even the criticism is welcome these days, because it means we’re kind of getting back to normal,” he said. “What I was focused on is the flow and technology and how it looked and sounded. And I thought it was fantastic. I have nothing but praise for them. The content decisions, I’m not even concerned about that. We have our own thoughts and what we’re doing.”

That will include Turner’s own share of features and pre-produced segments for a five-hour broadcast, but also plenty of ebbs and flows and time to just lay out and let four of the most famous athletes on the planet use their mics, interact and do their thing.

“From the booth perspective, it’s just trying to absorb all that and know when to get in, when to get out,” Anderson said. “I need to make sure we hit all of our markers in terms of sponsorship, but really I’ll let the players drive the bus in this case and adjust accordingly.”