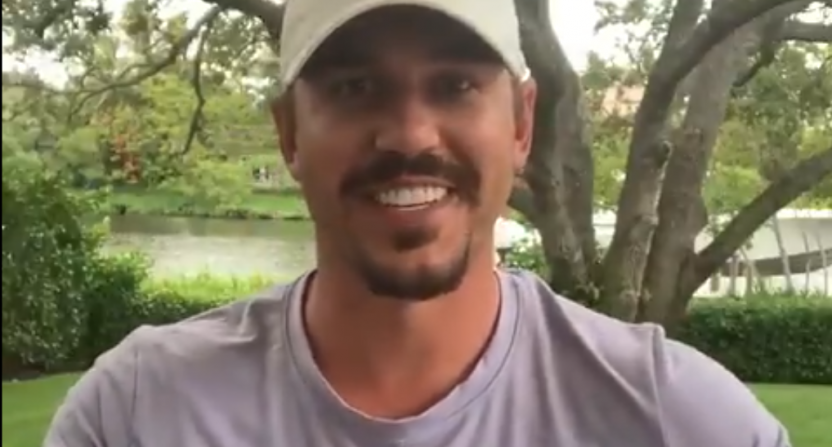 During the social media feud aftermath of the leaked Brooks Koepka-Bryson DeChambeau video, Bryson insinuated that he was living rent free in Koepka’s head.

That was after Koepka apologized to Aaron Rogers, who will be playing with Bryson in the next version of The Match this summer. Brooks responded with this:

That’s a clip of a fan at the PGA jokingly calling Bryson “Brooksy”, which led to Bryson suggesting that fan be tossed. Today that was very relevant again, as some fans at the Memorial (presumably at least somewhat close to the overserved line, although it’s hot in the Midwest right now so that line is pretty low) referenced that video and called Bryson “Brooksy” again.

Bryson, or someone in his camp, spent the round having those fans ejected, with Twitter lighting up with pictures of fans being escorted out by police.

Every single person yelling “let’s go brooksy” at Bryson is being pointed out by both Bryson and his caddie and being escorted out of the Memorial tournament by police. If that’s not considered rent free then nothing is. @PFTCommenter

Whoa. Sure seems like someone has, in fact, given the directive to remove anyone from the crowd who yells “Brooksie” in Bryson’s direction.

At least three fans have been removed on the front nine (he started off the back). Security is going into the crowd to have fans removed. pic.twitter.com/eAmLNkEqDC

So, that’s not great from Bryson, the world’s biggest example of someone who wants all the attention in the world from media, fans, and the world at large, but only if it’s sycophantic. We learned that last year when he went on a rant about how networks should be doing more to protect his brand, and not to, you know, broadcast and cover a sport.

Koepka isn’t in the field this week at the Memorial, which meant he was in prime position to watch things unfolding. That led to this video response:

Capping off a long day with @MichelobULTRA! Thanks for all the support today. Also, we’ve got something for you… pic.twitter.com/kwtwXg3Kqb

So there’s a bit of a “Aww, it’s a crummy commercial!” element to that video, but it’s more than made up for by the delighted way Koepka says “It’s Brooksy!” at the beginning. Offering ejected fans free beer for their trouble is, admittedly, not the kind of thing we’re used to seeing from golf, where every player is a perfect gentleman even if they’re caught blatantly cheating on camera and then lying to cover it up.

But Koepka wasn’t inciting fan behavior today; he was simply responding in the aftermath to a player having fans ejected for the kinds of insults that athletes in other sports wouldn’t even hear, much less be bothered by, relative to the stuff they’re used to hearing from the stands. This is a pattern in golf, too; Justin Thomas infamously had a fan tossed a few years ago under similarly weak circumstances. Koepka at least has some self-awareness, even if his own image can be a bit artificial as well.

Koepka also happened to pick a sponsor here that’s also a major PGA Tour sponsor, which is either good luck and circumstance or some truly Machiavellian shit. Either way, it makes punishment* (inasmuch as the Tour punishes anyone) unlikely.

"guys guys now it's all fun and games until we're semi-inciting crowds with marketing ploys… what's that?" pic.twitter.com/nSpTYyUf32

In any case, it’s truly amazing how much shit Bryson has either found himself or placed himself in over the last year or so. And maybe this whole thing is hugely manufactured, and maybe it’s jumped the shark already, and maybe fans will be on the grounds at the Memorial all weekend shouting rowdy things at Bryson in an effort to get in his head. (Which would still be less than Koepka had to deal with on the 18th hole at the PGA, when he was still alive to tie Phil Mickelson and had to wade through a literal mob.)

It’s hard to feel too much sympathy, though. All he had to do was ignore a few idiots shouting “Brooksy” at him, but he couldn’t do that. So, here we are: a branded beer giveaway serving as a fairly epic troll of Bryson, from hundreds of miles away.

It’s also the most relevant mainstream golf crossover story in years, for better or worse.