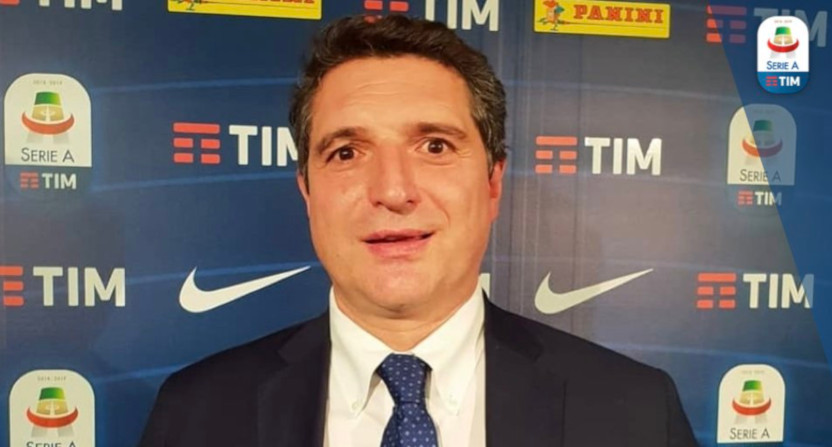 We’ve seen plenty of unusual content inadvertently broadcast thanks to hot mics over the years, but the latest story along those lines comes from Italy, and involves the lengths that Serie A officials went to to try and avoid showing racism in the stands. There have long been discussions about racism in Italian soccer, but those were intensified in September thanks to a New York Times story about racist chants against Inter Milan’s Romelu Lukaku, and to defenses of those from fans and officials.

And now, Italian newspaper La Repubblica published a story Tuesday with audio of Serie A CEO Luigi De Siervo speaking to several club representatives in September following that Times story, which included him saying “I asked our directors (of the world feed) to turn off the microphones towards the Curva, so you won’t hear the racist chants on TV.” De Siervo then tried to defend that comment in remarks to Football Italia, but his reasoning isn’t exactly great:

La Repubblica contacted De Siervo to ask if he intended therefore to whitewash the racism of crowds in Serie A games.

“In the audio, you hear only a fraction of the reasoning,” he insisted. “We were talking about the television production and noting we are not journalists trying to find news, but rather producing a spectacle to be enjoyed and making the most appetising product.

…“What we were doing was considering how TV coverage can best explain the beauty of Italian football. We do that continually and the basic idea is to avoid dwelling on ugly incidents.

“This is not censorship! We are talking about how to get the best value out of a product. We’d just had to deal with that big article in the New York Times that called Italy the new front of racism in football.

“So I made suggestions on how to best point the pitch-side microphones. It often happens that you can hear details on TV that nobody in the stadium is aware of.”

Yes, on some level, broadcasters aren’t always too concerned with covering controversial parts of the sport they’re showcasing. That’s how you get all sorts of rightsholder controversies, and even sometimes backlash against broadcast employees. who speak out a little too much. But specifically telling broadcasters to ignore controversial behavior going on in the stands feels like saying the quiet part out loud, especially with that coming from a league executive rather than a broadcast executive. And it gets maybe more problematic still when De Siervo explains (also in that Football Italia piece) that they fired one director for spending too long focusing on a fan tribute to fans who were killed for involvement with a drug gang, and that they suspended another director for two rounds because he “focused on the home fans who during that time had done all sorts of terrible things.”

There’s no outside force that can mandate Serie A to let its broadcasters cover the whole story, so this probably isn’t going to change any time soon. But it’s something that’s worth being aware of for those who regularly watch the league (currently broadcast on ESPN+ and other ESPN platforms in the U.S.). When the CEO is making it clear that their TV coverage goal is to “best explain the beauty of Italian football” and “avoid dwelling on ugly incidents,” there’s going to be a whole lot going on that viewers never see. And it’s notable that De Siervo’s focus isn’t to stop the ugly incidents altogether, but to just stop them from being broadcast.

It also says something that De Siervo thought these comments to Football Italia would make him look better. Instead, they just provided more explicit proof of what Serie A is censoring and why. And while they can try their best to produce “a spectacle to be enjoyed” and “the most appetising product,” viewers should be aware that there may well still be some “ugly incidents” going on. They just won’t be shown on TV.